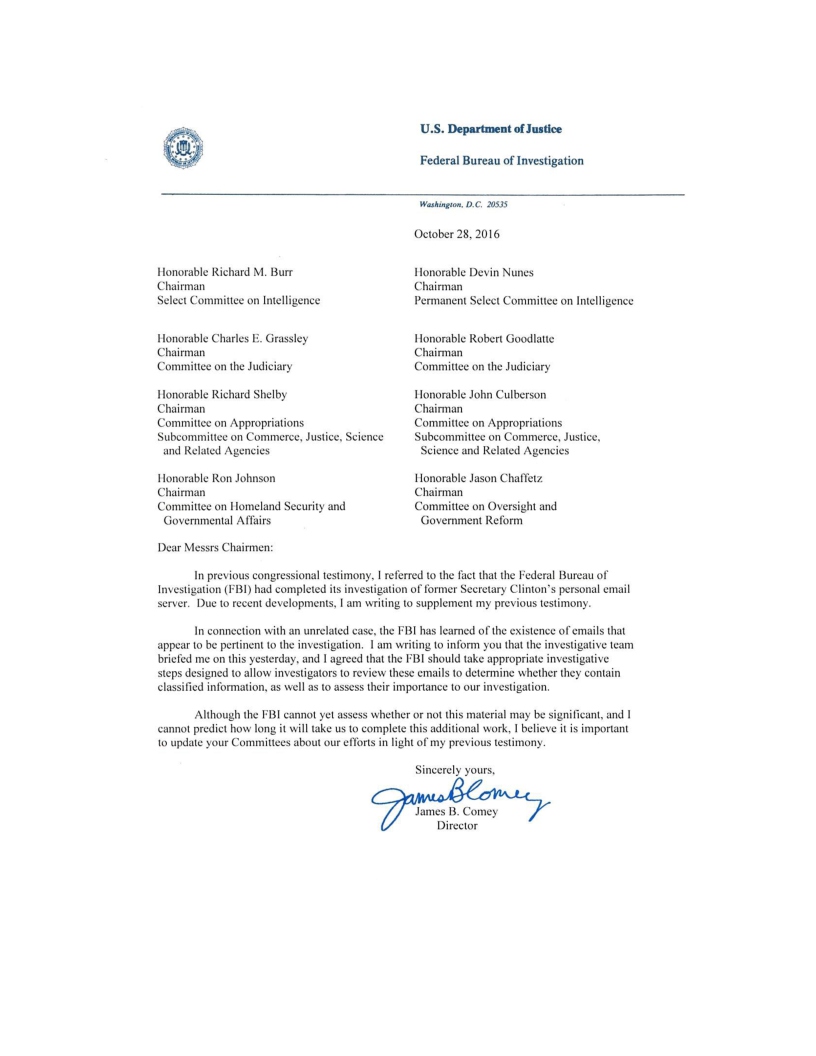 July 5th, FBI Director James Comey announced, on a nationally televised newscast, that the FBI had decided not to pursue further an investigation into Hillary Clinton’s emails. He said that her actions did not rise to the level of criminal conduct, but admonished her for being careless and negligent in her use of a private email server to conduct government business. This broke a century of precedent in the Department of Justice (DOJ), wherein, to my knowledge, no FBI official, at any level, had ever announced the results of an investigation before it had been presented to the DOJ for a legal opinion. I was shocked that Comey had done this, but thought that it was of such importance, internationally and historically, (a once in a millennium circumstance), that Comey was justified in what he did.

I was wrong. Last Friday, October 28, Comey did it again. In a letter to congress, he wrote that the FBI “has learned of the existence of emails (on Anthony Weiner’s computer) that appear to be pertinent to [the Secretary Clinton email investigation]” and that the FBI would be investigating this. Once again Director Comey, this time in the face of DOJ objections to his conduct, took it upon himself to divulge facts about an FBI investigation before it had been presented to the DOJ for legal opinion. Coming less than two weeks before a national presidential election it also violated DOJ policy in not divulging information concerning investigation of candidates so close to an election.

The Bureau that I knew, from 1964 to 1995, was strictly apolitical. We all had our own opinions, but they did not spill over into our casework. The only press releases we were allowed to give were notifications of arrests we had made in our cases. We never commented publicly on the progress of an investigation. To do so would have meant a transfer to Butte, Montana or Jackson, Mississippi. This policy (instituted by J. Edgar Hoover) went all the way up to the Director. There was security in knowing this. It eliminated public or political pressure as a factor in our investigations.

Secondly, we were all aware that the FBI was an adjunct of the DOJ. The director does not hold a cabinet level position. He works for the U.S. Attorney General (AG), who is a cabinet officer. The main reason for formation of the FBI in 1908 was to give the AG control of his own force of investigators. Prior to that time private detectives were hired or Secret Service agents were borrowed. Even our most powerful director, J. Edgar Hoover acknowledged and stuck to this hierarchical organization. Although he disliked AG Robert Kennedy, he did not publicly embarrass him. The two actually became partners in bringing organized crime to heel.

Now, Comey has effectively politicized the Bureau. There have been reports of increased resignations and demoralization of many of the agents over this. Many believe that Director Comey, although a good man, has become presumptuous and self-righteous. Many also believe (I am one of them) that he is now exacerbating the situation by trying to cover his butt. He has created a colossal mess. I believe that Comey has brought shame and disrepute to the FBI and DOJ. I am saddened by it.