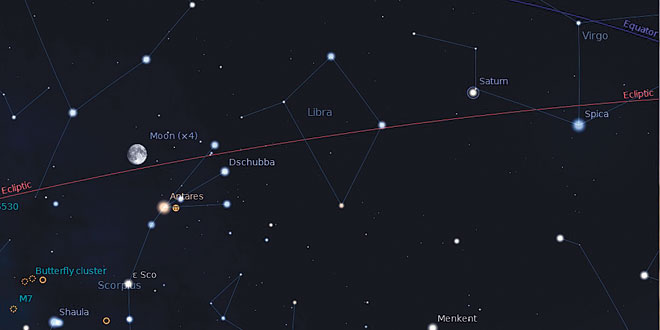 It has been some time since the ecliptic has been a topic of discussion in this column. As tonight the nearly full Moon has chased the lesser stars from the sky this would be a good time to contemplate this vitally important yet invisible line.

The ecliptic is simply the apparent path the Sun makes in the sky during the course of a full year; or to put it another way it is the projection of Earth’s orbit upon the fixed stars. The Sun moves just under one degree along the ecliptic each day – an amount that would be easily detected by the naked eye if the Sun were not so bright. The ancients had to determine the exact position of the Sun indirectly by observing which stars were blotted out by twilight each day, probably assisted by crude instruments like the shadow of a stick. The plotting out of the ecliptic accurately must have taken centuries.

The ancients were highly motivated as an accurate calendar needed to be based on the motion of the Sun. Even today our own calendar can be traced directly back to the ecliptic. Additionally all the major planets of the Solar System, and the Moon, are never far from the ecliptic; this is clearly telling us something fundamental about the construction of the Solar System. Also it is impossible to calculate eclipse times without reference to the ecliptic. This last property seems to have impressed the ancients most as the word ecliptic is clearly derived from “eclipses”.

Tonight you can see from the chart both the Moon and Saturn are floating just north of the ecliptic. The Moon’s orbit is tilted about 5 degrees to the ecliptic and therefore crosses it twice each orbit; the points where the orbit crosses the ecliptic are called nodes. These nodes are not in fixed positions, but travel around the ecliptic in a complicated 18 year pattern. The important thing to note is that an eclipse can only happen when the Moon is at or extremely close to a node. When a node is at the same location the Sun happens to be at the result is a Solar eclipse. When the node is exactly 180 degrees from the Sun we get a Lunar eclipse.

The next time a total Solar eclipse happens on Marco Island is too far in the future for any of us to worry about (a couple of centuries), however a fine Lunar eclipse is scheduled to happen in less than a year, the night of April 14-15th, 2014. Unlike its cousin, the Solar eclipse, a Lunar eclipse is completely safe to look at and is visible across an entire hemisphere.