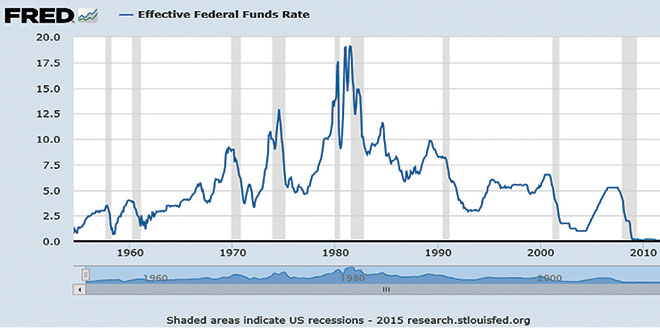 “The influences on stock prices are so numerous and so complex that no person has ever been able to predict the trend of stock prices with consistent success.” ~ As stated by Sir John Templeton in August, 1958.

Question: Once again, there is talk all over the news of the Federal Reserve raising interest rates. Please explain why they would raise rates and how it would affect the economy. I’m not clear on the relationship between these two variables.

Answer: Let’s start by examining the role interest rates play in the overall economy. In the simplest of terms, interest rates are the cost of money. Those who borrow money pay interest to do so, and lenders receive interest as payment for taking on the risk of advancing funds to another person or institution. When the cost of money is low, it’s expected that economic activity will increase. Therefore, raising interest rates would logically indicate a need to slow activity.

During the peak of the financial crisis in October 2008, Warren Buffet said that “the financial world is a mess, both in the United States and abroad. Its problems, moreover, have been leaking into the general economy, and the leaks are now turning into a gusher.” It was five more months until stocks bottomed. During this trying time, the Federal Reserve brought interest rates to near zero-percent, and they’ve stayed there since. Any discussion of rising rates would suggest that the economy is doing better and ready to pullback on the “easy money” approach.

The 1983 movie “Easy Money” featured Rodney Dangerfield and Joe Pesci as classic loud- mouthed degenerate bad boys with relatively good hearts. The movie’s title became the go-to phrase for effortless wealth, finding its way into economic conversation as a euphemism for low interest rates. The premise of the movie was that Dangerfield would inherit his mother-in-law’s wealth only by proving that he could discontinue his evil ways and clean up his act. I won’t ruin the movie for you by revealing Dangerfield’s fate, but let’s say that it’s tough for a tiger to change his stripes.

As we work our way out of the economic crisis, it was the “easy money” and low interest rates that kept money flowing, thereby providing some sense of confidence during a time of immense financial instability. Today the Fed is hinting at raising rates. This indicates that the economy is stronger and the employment picture is improving. Much of this is reflected in financial markets.

Because the Fed is starting from a historically low interest rate level, any increases will likely be small and gradual to maintain financial stability and avoid disrupting the economy. While the U.S. expansion hasn’t been overly impressive, the economy is slowly growing.

One thing we have in our favor is that the economy is resilient. This summer we’ve already survived three economic squalls:

1) Greece flared up again and tiptoed across the default line;

2) The strong U.S. dollar makes sales of goods overseas more expensive. This puts pressure on profits, causing corporations to trudge uphill, and as the dollar continues to strengthen in response to China devaluing their currency, more headwinds are produced; and

In theory, rising rates mean that the economy is strong enough to handle the end of “easy money.” Markets are at near all-time highs, and falling in response to negative headlines, including concern over rising interest rates. It’s almost impossible to predict how the market will perform over the next year. That’s why discipline and patience have historically rewarded the long-term investor. Try to focus on investment fundamentals and the basics like quality when investing, remembering that patience really is a virtue.

The stock market has benefited from the Fed’s easy money policy and near zero-percent rates since 2008. We don’t know what the reaction to interest rate increases (no matter how small or gradual) will be. It is reasonable to believe volatility will increase. The bottom line is that investors will continue to seek stability during times of uncertainty. Rising rates could rattle an already fragile financial system and send tremors in all directions. But perspective is in order. While we may see day-to-day volatility that originates from the news, keep your attention on the longer-term plan. Stay focused; invest and plan accordingly.

The opinions expressed are those of the writer, but not necessarily those of Raymond James and Associates, and subject to change at any time. Information contained in this report was received from sources believed to be reliable, but accuracy is not guaranteed. Converting a traditional IRA into a Roth IRA has tax implications. Investors should consult a tax advisor before deciding to do a conversion.