Dying to Survive, Part I Coping with Heart Disease, Complacency, Indifference, and a Flawed Healthcare System 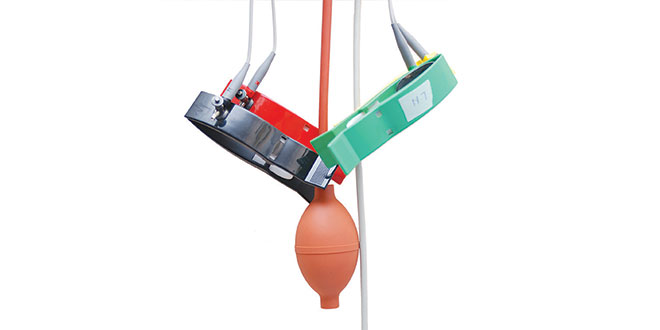 Heart disease is the number one cause of death in the United States. Over 25 million Americans have the disease and over 600,000 will die each year. Approximately 700,000 will suffer a heart attack during the same time period and over 350,000 Americans will perish. The most common form of the malady is coronary heart disease, CHD, often referred to as arteriosclerosis, a hardening of the arteries. The most common subset of arteriosclerosis, is atherosclerosis, a narrowing of the vessels that supply blood to the muscles, lungs, and organs including the heart. If one is fortunate and atherosclerosis is diagnosed at the earliest stage of advancement, precautions can be taken to stop, slow, and in some rare instances, mildly reverse its progression of plaque build-up, which is the main cause of blood flow obstruction within the arteries. Changes in lifestyle which include stress reduction, a healthy diet with proper nutrition, adequate rest, reasonable exercise and prescribed medication can add elasticity to the artery walls, strengthen heart muscles and improve blood flow. The end result of these lifestyle modifications can usually be determined by the degree of pain (angina) brought about by trial and error while engaging in daily activity.

Most survivors of a heart attack would likely confirm that some degree of physiological transformation follows such an event, which not only impacts their lives, but those of their loved ones and friends. But, what is often not addressed by physicians and immediately recognized by patients and family members, is the post psychological trauma caused by the event and the long term ramifications to the patient and loved ones if not identified and properly addressed.

I am a survivor of the one of the least survivable heart attacks, one which occurs while asleep, and one which involved the left main artery, often referred to as “The Widow Maker.” The purpose in sharing the personal story I am about to pen is to provide hope and encouragement to those, like myself, who have heart disease and survived a cardiac infarction (heart attack), and others who have been diagnosed with the illness but have not experienced any form of cardiac event. It is also my intent to enlighten and alert those who may inherit the disease so they are diligent in their selection of healthcare providers, better prepared to handle their prognosis and more apt to take control and properly manage their care. The heart is the center of our very existence, and although an organ and muscle, it is also a metaphoric symbol of vulnerability, love, and mortality. If my story proves informative and returns some degree of normalcy to the lives of a patients and their loved ones, who, at times, can be overwhelmed and disheartened by the complacency and indifference shown toward them by some members of the medical community, then my lesson is of value and the time conveying my message, well spent.

I had been relatively healthy most of my life until the latter months of 1993. I scheduled an appointment with my physician in December of that year and told him of newly developed symptoms I was experiencing including tightness in my chest, headaches, sleepless nights, night sweats, and dry coughing. Most disturbing was the instantaneous, excruciating pain felt in my right temple when exercising. I told him of the most recent time this occurred when indulging in intense exercise that caused me to immediately drop to my knees in agony.

The physician knew from our previous conversations that I was quite stressed. He knew of the guilt I felt for encouraging my mom to sell her home 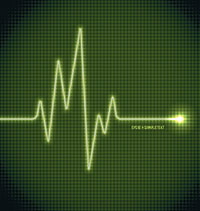 of 20 years and relocate to a warmer climate. He knew of the toll taken as a result of my dad’s 10-year fight with emphysema and my mom’s current struggle with lymphoma cancer. And, he knew I had prematurely retired from my previous profession of over 20 years, had hastily abandoned friends to care for my mom, and was unhappy in my workplace. I asked for an EKG and a blood work-up. His response, “You’re 47 years old! You’re fine! You’re healthy and too young to be experiencing heart problems. I’m quite sure it’s allergies and congestion causing the tightness and cough. I’ll give you a prescription for Seldane D. If you’re not better in a month come back and I’ll order an EKG. Go home and relax, you’ll be fine.” I went home to my wife Debbie and said, “I am going to have a heart attack within a month.”

On the night of January 13, 1994, I went to bed earlier than normal after completing a light workout. I awoke around 3:30 AM, with severe flu-like symptoms. I immediately felt an intense burning sensation in my shoulder and left arm, and had a terrible headache that made me nauseous. I felt an intense strangling sensation in my throat and lower-left jaw and began to lose control of most of my body functions. I woke my wife and asked her to take me to an urgent care center that was within a mile or two of our home. What happened next nearly cost me my life and made me far more diligent of what is defined as an “Urgent Care Center.”

On the morning of January 14th, (my wife) Debbie and I walked into an urgent care center, immediately informing the staff that I believed I was having a heart attack. We were initially told that I looked too young and healthy to be having an attack. “After all,” they said, “how could someone walk into a hospital and remain calm if they were having a heart attack? You don’t seem to be in very much pain.” I told them I handle pain well and that in my late twenties, I fractured the radial heads of both elbows in a freak accident, but managed to sit in a hospital’s waiting room in agonizing pain for hours before being admitted and treated. I was given an aspirin and told to wait. I demanded to be given a clot busting drug, but was told this could not be administered without a second opinion, and that another physician would be contacted for consultation. Hours later, nearly mid-morning, the second physician arrived. My wife Debbie and I could not believe our eyes. The physician called was the same doctor who sent me home a month earlier opting not to perform an EKG, instead prescribing a drug later taken off the market because it was found to restrict arteries. The next words to come from his mouth were even more shocking. “Send him home. He’s not having a heart attack. I told him last month he was fine.” I turned to Debbie and said, “Get me to a real hospital or I’ll be dead by noon!” Although the center discouraged my release, 45 minutes later I arrived at my hospital of choice. The last thing I remember hearing was “his blood pressure’s dropping, get him to intensive care now.”

After keeping me in intensive care for several days to stabilize my condition, I was transferred to another hospital that was licensed to perform cardiac catherizations, also referred to as angiograms. I had been heavily sedated and 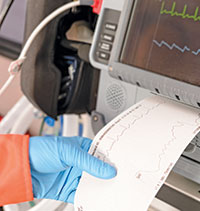 treated with hefty doses of morphine for pain, so my memory of the angiogram is somewhat clouded. I wasn’t surprised to learn several of my arteries were severely blocked and that my heart muscle had been slightly damaged, but was startled when told the lining of an artery wall had been nicked, forming a hematoma which left the area from my abdomen to right knee black and reddish-blue and swollen.

I had a high fever for the next two days and a planned angioplasty procedure to compress the plaque and increase blood flow had to be postponed. At the time of admission no single rooms were available and I was paired with a patient who coughed and hacked and said he had been diagnosed with pneumonia. My attending physician had to leave due to other commitments and I was assigned an interim cardiologist to perform the procedure. After being informed the longer the postponement, the greater risk of suffering another heart attack, I had Debbie sneak me from my room for walks, which worked, for my temperature the following day was mildly elevated, but permissible.

During this period in time, my family had been struggling with another medical crisis. Mom was “old school” and had unconditional faith in physicians including her current oncologist. I, on the other hand, was not as accepting and had sought a second opinion from a highly regarded specialist from a different geographic area. After all, why would I unequivocally trust someone who had sent mom to receive radiation treatment for lymphoma and had been mildly chided by the attending physician for not addressing the cancer with a combination of oral medications? The second opinion was, “the tumors were still growing and that she was not in remission as told.” I showed the report to mom’s oncologist who went into a mini-tirade saying he was the educated one in the room and who was I to question him. I later received an apology, but no longer had faith in her physician and worried constantly about her well-being.

Mom had her reservations, but didn’t want to change providers until a viable alternative could be found. Prior to my hospitalization, mom wasn’t feeling well and had made an appointment to see her oncologist. Unfortunately, it had been made weeks in advance of my hospitalization, and she called to seek a change in order to visit her son in intensive care. She was abruptly informed this was impossible at the time. No compassion was expressed for her condition or personal crises, simply a display of apathy. Debbie didn’t want to tell me of this, but I knew her too well, and she couldn’t hide it from me. Of course this weighed heavily on me as I retired for the evening to rest before my next procedure.

The following morning I was prepped, placed on a gurney, and wheeled into the cath lab for my angioplasties by one of the nurses who would be assisting the attending physician. I felt somewhat comfortable with her even though she was the one who inserted my IV. I had an intense dislike for needles dating back to the time when I saw IVs being inserted between my father’s toes during his last hospitalization for emphysema because normal portals had collapsed. And, I had developed a fearful phobia of hospitals and doctors during dad’s ten-year struggle with emphysema, and my mom’s lengthy battle with lymphoma cancer.

Read more from Roy Eaton’s “Dying to Survive” in the next issue of Coastal Breeze News, on newsstands September 2, 2016.