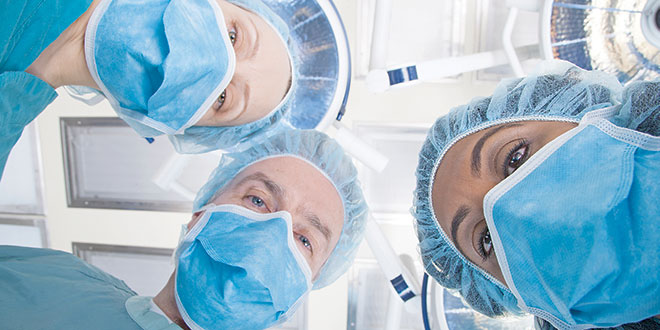 I sat motionless, stunned by what I heard. My heart began to race for I feared that I might lose my partner and best friend.

An hour later I was informed the removal was successful and that she would be going home in a day or two. The event would take its toll for I would soon again experience the symptoms of severe angina.

I started a new job and was quite content with my position and co-workers. But, in the winter of 1996, I collapsed while at work and was rushed to the hospital where I underwent another angiogram and angioplasty. Debbie and I had our fill of hospitalizations and procedures and decided it was time to seek a second opinion. I sent an overnight letter and documentation to one of the most nationally recognized clinics for cardiac care and received an immediate response from the head of cardiology who wanted to meet with me the next morning. Wanting to view my condition firsthand, we proceeded to the cath lab where I underwent another angiogram procedure. Within hours he told me of my results and informed me that I would likely have bypass surgery the following morning, but was not certain until he discussed the matter with the surgeon. He called Debbie and told her to come to the clinic. That night, surrounded by a few family members and close friends, I learned of my fate. Both my cardiologist and surgeon entered my hospital room and patiently explained their decision. For the time being, there would be no surgery. I was firmly told in explicit terms, “Retire to reduce stress, maintain your strict diet, and continue your daily walks or you most likely will not see the year 2000. This will give your body time to heal and stabilize, and perhaps, postpone the need for surgery. Under no circumstances should you undergo additional invasive procedures including angioplasties before contacting us, because the risk of complication is too high. If the blockages continue to progress, the only option will be bypass surgery.” I was, however, advised to keep my current local cardiologist should an emergency require an immediate intervention, for both doctors believed him to be qualified. I would stay the night and be released the next morning. Obviously, our decision to seek a second opinion and change primary specialists was our best decision to date and would prove to dramatically lengthen my lifespan and better my quality of life.

This visit too, would not be without controversy. Debbie and I always sought a single room with an extra bed during hospital stays so that we could keep an eye on one another. Around 4 AM a technician entered the room to take a chest x-ray. Debbie inquired why this was necessary since I was being discharged in a few hours, but was told I was being prepped for bypass surgery. I said, “No, I was told there would be no surgery.” A male nurse came in and pointed to a chart and said, “Yes you are having surgery.” I said, “Call the doctor!” The man replied, “It’s 4:30, I’m not going to wake him.” I said, “Why not, you woke me!” 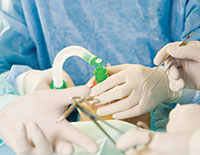 I guess I was a little testy and anxious. A few minutes later the nurse came in and said we were correct, that it had been miss-noted on the chart by a member of the staff and I would be going home.

The next few years were without incident, but the stress again had taken its toll on Debbie. We decided to sell our condo, move closer to her place of work, and temporarily rent another condo, which probably wasn’t the best decision, since we were unable to sleep most nights because the person in the adjacent unit continually snored.

Debbie advised me to visit a friend in Phoenix in January of 1999 in order to rest and catch up on lost sleep. The night before departing, half asleep and not use to our new unit’s floor plan, I stumbled in the dark and hit my head on the kitchen counter as I fell forward. There was a gallon of red juice on the counter top, which I must have grabbed in an attempt to break my fall. Debbie ran into the room, switching on the light to see what had happened. I was lying on the floor dazed and covered with red juice that had also pooled on the floor next to my head. Mistaking it for blood, Debbie screeched in disbelief and started to cry. I scrambled to my feet and attempted to console her, but it took nearly a half hour before she stopped shaking. I told her I would cancel my trip, but she thought it would be good for both of us if I didn’t. Obviously, there was no need to ask why.

Three hours after landing in Phoenix, while having dinner with my friend, Debbie called and said to come home for she was very ill. I guess the events of the previous night had taken its toll. Debbie was again carted into surgery, this time for a total hysterectomy. The operation was a success, but her stay was prolonged due to a high fever, which prevented the epidural from being removed. Thankfully the doctor refused to listen to the insurance company’s representative who wanted the needle removed and Debbie sent home. But, again, her stay would not be without controversy.

Although we requested and received a single room, the staff preferred I didn’t stay the night and refused to provide a cot, even though a gurney sat outside the door the first evening. The second night, when it became obvious I wasn’t going away and Debbie told them I was a cardiac patient who could become quite ill sleeping on a cold, damp, cement floor, a nurse threw a few pillows and a blanket in my direction, which enabled me to get a few hours of sleep. Around midnight, a nurse entered the room to give Debbie a sleeping pill. I told her that she had received one a few hours earlier. She insisted I was incorrect and proceeded to awaken Debbie to administer the medication. Mindful of my similar experience of being incorrectly awakened, I asserted my stance, stood between my wife and nurse and told her to check Debbie’s history. I was found to be correct and the medication was not given.

[/caption] wp-image-60205″ src=”http://www.coastalbreezenews.com/wp-content/uploads/2016/09/A6-CBN-09-16-16-1.jpg” alt=”a6-cbn-09-16-16-1″ width=”200″ height=”133″ />Stressed by Debbie’s sudden illness and hospitalization, I again began to experience angina. When visiting my favorite cousin three months later, I became tired and disorientated, at first I thought it may be heat stroke, but soon realized it was heart related. A few weeks later I underwent another cardio-lite stress test. Approximately eighteen minutes into the test, the administering cardiologist was about to terminate the procedure when he noticed a reading he didn’t like. I tried to reach my primary cardiologist but was told he was out of town, and my surgeon, but was informed he had left the hospital. The next day I was in another cath lab, a reluctant participant in another angiogram procedure. For some inexplicable reason, I was far more nervous than in the past, perhaps because I didn’t believe I could continue to defy the odds and emerge from the test unharmed. And, because I knew if the blockages had significantly narrowed, my only choice would be bypass surgery.

A few hours after completing the procedure, my cardiologist came to my room to inform me of the results. The blockages had significantly narrowed, and after consulting with a surgeon, the decision had been made to perform a triple bypass the following morning. A few hours later, I was visited by the surgeon who briefly explained the required preparation and surgical procedure and asked if I wanted to view a video on the subject, which I promptly declined. I thought, yeah, like I really wanted to see what was going to happen to me in the morning. Filleted like a fish! He said he was going to use both mammary arteries and a vein from my left arm for the graphs. For the first time in my life, I believed the less I knew, the better off I’d be. A few hours later, a priest stopped by and asked if I needed anything. His presence both boosted and undermined my self-confidence, for I took this as a positive and negative omen because he had been the first priest I served as an altar boy forty years earlier. After he left the room, I again tried to contact my primary cardiologist, but was informed he was still away. I went to bed wondering if I would be alive this same time the following evening or if my Debbie would be left heartbroken and alone.

The next morning I was in good spirits, but highly anxious as I kissed my wife and was wheeled to the surgery room. I remember looking up at the doctor and asking him, “Are you the best?” He said, “I’m very good.” “But you are suppose to tell me you’re the best,” I replied. “OK, I’m the best,” he stated in a half-joking manner. Although not the wisest comeback, I remember saying something like, “One way or the other I’ll be back to let you know.”

As they began to place the mask over my face, for the first time in my life, I truly believed I was now in God’s hands and felt a calmness engulf my body and mind…

Read the conclusion of Roy Eaton’s “Dying to Survive” in the next issue of Coastal Breeze News, on newsstands September 30, 2016.

Is Your Heart in the Right Place?