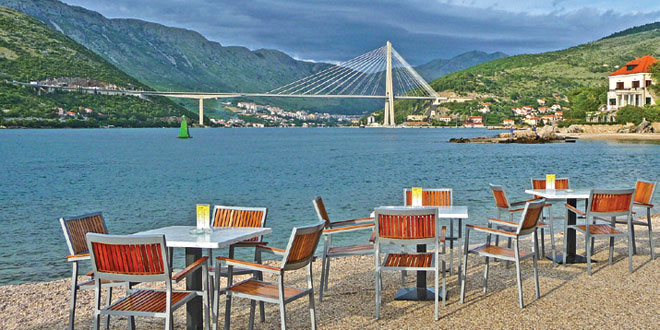 A trivia question: Who was among the first, in 1776, to recognize the independence of the United States and the first to establish trade with it? It was the nation state of the Republic of Ragusa, renamed Dubrovnik in 1918. Dubrovnik, a UNESCO World Heritage Site is a dramatically beautiful walled city that sits right on the Adriatic.

Believed to have been founded in the seventh century, Dubrovnik has been under the influence at various times of the Byzantines, Venetians, Hungarians, and the Austrians. An independent city state from 1358 to 1808 and once one of the busiest ports in Europe for commerce, it is now a popular one for cruise ships.

In the turmoil accompanying the dissolution of Yugoslavia, Dubrovnik was attacked by Serbian and Montenegrin forces of the Yugoslav army. Under siege from October 1991 to May 1992, more than half of its buildings were damaged. A city that prided itself on its religious tolerance, many people say the attack was for territory, not religion. The people of Dubrovnik never expected the war; they thought issues would be solved politically, and they certainly never expected that their historic city would be attacked. Civilians evacuated, many taking up residence on nearby islands or resort hotels surrounding the city.

Today, Dubrovnik is restored to its past grandeur and is a great place to visit. Vestiges of the war are still evident in the different colored terra cotta roof tiles of the city; the ones that had to be replaced a brighter orange than the originals. An artist who lives on Od Puça, a narrow street with wonderful shops, recounts 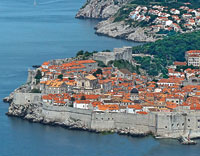 Bird’s eye view of the walled old town of Dubrovnik.

the seize through photos displayed outside his now rebuilt gallery. Some of the resort hotels outside the city still lie in ruins. A museum atop Mt. Srd chronicles those long months of battle.

One of the treats to be found in Dubrovnik is walking the walls. The entire perimeter of the old city can be traversed. Although there is a portion that is free to walk, ticket purchase and entrance are just inside the main Pile Gate. If it is not too hot, try walking the walls noontime. The cruise ship groups throng the walls in the morning, returning to their ships for lunch. There are some tour groups that tackle the walls in the afternoon, but not as many as in the morning. During “season”, the walls are open until 7PM. Allow an hour and a half depending on how much you stop to admire the view or take photos. Do remember to take water; there is no shade.

Among the other sites in Dubrovnik are a maritime museum, the oldest Sephardic synagogue in Europe and its museum, Dominican and Franciscan Monastery Museums, a Serbian Orthodox Church and Icon Museum, the Cathedral and its treasury, Sponza Palace and Bell Tower, St. Blaise’s Church which celebrates this patron saint of Dubrovnik (although his relics are in the Cathedral), and the Rector’s Palace which houses the Cultural Historical Museum.

For a bird’s eye view, take a quick cable car ride up Mount Srd. Here you can pause for a drink or piece of triple fudge chocolate cake while soaking in the view. The Napoleonic fortress adjacent to the cable car and restaurant houses the

The “hole in the wall” Buza bar, clinging to the rocks between the wall and the Adriatic is a popular place to watch the sunset. PHOTOS BY VICKIE KELBER

exhibit, “Dubrovnik during the Homeland War”. Do go up to the rooftop of the fortress for an unparalleled view.

A “must do” in Dubrovnik is a stop at one of the two Buza (“hole in the wall”) bars built right into the side of the city walls. You literally walk through a hole (door) in the wall of the city to emerge on the steep cliff above the water where two very casual bars have been opened with seating that clings to the sides of the cliff. We spent a wonderful evening here, sipping wine and watching the changing colors of the sunset.

Another way to get a good view and appreciation of the city as it rises up out of the sea is a one hour “panoramic” boat trip. Although advertised as a tour, there is no narration. But, it is relaxing and scenic. Tourists are returning to Croatia in increasing numbers each year. Recently admitted to the EU, tourism will continue to grow and improve. My guess is within a few years, those boat tours will increase in price, offer narration, and serve food and beverage!

A stroll through the pedestrian only old town, stari grad, exploring shops, cafes, and restaurants is another pleasure to be enjoyed. The main street is Stradun (also known as Placa), but it is more charming to wander into the streets and alleys off of it. Due to the rebuilding of the city after a 1667 earthquake, the uniform architecture to be found along Stradun, including doors and shutters, is striking. The names of shops are displayed on the lanterns above their doors rather than on 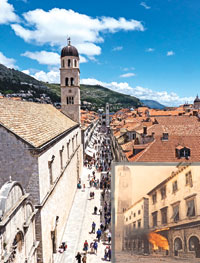 The main street of Dubrovnik has been fully restored following a seven month siege during the “Homeland War” 1991-2 (see inset).

A quick side trip can be made to the “cursed” Lokrum Island reputedly the location of Richard the Lionhearted’s shipwreck. Quite visible from the old town, it once was the site of a beautiful Benedictine monastery. When the French bought it and deposed the monks, a curse was supposedly placed on the island. Subsequent owners met ill fates including Maximillan von Hapsburg who was called to Mexico where he was killed and his wife Charlotte who went insane. Rudolf, the heir to Emperor Franz Joseph I lived there for a while; he later committed suicide along with his fiancee. Three bankers bought it; they went bankrupt and committed suicide. The day after the next owner signed the purchase papers, he drowned. Locals are superstitious and won’t spend the night there. But, it makes for a pleasant day visit with rocky beaches, small salt lake, shady pathways among tall pines, and botanical gardens built by Maximilian.

Hotels in the old city or within walking distance of it are limited. More popular are rooms or apartments (sobe) in private homes. Many people, us included, stay outside the city at the resorts Babin Kuk or Lapad. Both areas have their own restaurants, some shops, and are a quick, easy bus ride to the old town. Babin Kuk, the less populated, is home to Copacabana Beach, the longest one in Dubrovnik. That said, it is not very long, but does offer a restaurant/cafe. We spent another evening there watching the sun set while sipping a drink in the shadow of an elegant cable bridge and listening to the horns of the cruise ships as they departed for yet another port.