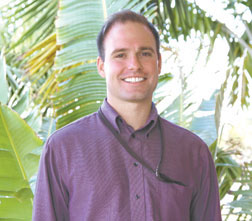 Joe Irvin, Marco Island’s new Zoning Administrator, has been on the job for only four months. He has organized a comprehensive Midtown Plan incorporating ideas and recommendations from previous staff efforts. He has also added his own thoughts and perspective to be considered by the Marco Island Planning Board, Marco Island citizens, property and business owners and all stakeholders in Midtown today and tomorrow.

Joe worked for the City of Sequim, Washington, which is northwest of Seattle, where he was raised. His family relocated to Southwest Florida in order for his wife to attend a graduate program in the medical field. She is now employed as an occupational therapist and the couple has a three year old daughter.

When Joe arrived at Marco Island City Hall he went right to work in his new job organizing myriad boxes and files concerning Midtown. He has put together a forward looking plan that takes into consideration the limited financial resources presently available to the city.

Two essential goals guide his recommendations. The first is to retain the authentic, tropical, small town ambience residents and visitors alike appreciate. A second goal is to ensure that Midtown continues to serve as the center of culture, commerce and civic life.

The proposal is designed with short term, midterm and long term strategies, each with a suggested time span for consideration and implementation. The plan emphasizes the need for public and private partnerships to accomplish the strategies over a period of 20 years.

Joe stated, “The vision for midtown is to promote and incentivize new development and redevelopment into a safe, compact and interconnected core. The plan recognizes and reflects desired uses, activities, access points/corridors, linkages, comfort levels and the desired community image in order to increase Midtown Marco Island’s social and economic fabric.”

Joe visualized three low cost steps to work on in cooperation with the city, midtown businesses and property owners. The first step is to design an insignia, in consultation with the Marco Island Arts Advisory Committee, which will be used on street signs while improving “way finding” signage in Midtown. The second step is to address code violations in Midtown through a cooperative program with business and property owners. The third, and most important, step is to consult 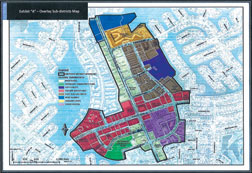 stakeholders in each of the eight sub-districts created in the Draft Midtown Plan as well as citizens of Marco Island about the Plan’s vision, policies and implementation strategies.

A proposed overlay of Midtown has created eight sub-districts which have unique land uses and properties. “The intent of the sub-districts is to maintain all current permitted land uses and density (as provided in the Comprehensive Plan dated 9/17/07) while providing further development incentives within the areas.”

Joe envisions a series of walking audits and community meetings with residents, businesses and property owners who will be notified in advance. Stakeholders will have the opportunity to review the proposal while offering suggestions and describing their vision for Midtown.

Joe believes certain low cost aspects of the plan can be implemented with the cooperation of private owners and the city. Parking and landscaping violations can be resolved and agreements can be developed. More pedestrian/bike friendly access can be made possible by public/private investment. Joe offers positive conviction in these difficult economic times. “Be happy with small successes and work on affordable steps in the plan.” The future success of Midtown needs to be improved by public and private dollars and that will come.”

“The Bay Walk Trail, which will connect Veterans Community Park to the Esplanade, is an example of a long term goal which will require lots of money and engineering to complete. We know it will increase pedestrian movement to and from both areas while improving safety for pedestrians when crossing Collier Blvd.,” advises Joe.

Joe will be arranging walking audits and community meetings in each of the sub-districts. He welcomes calls and emails from interested residents who would like a more complete overview of the Draft Midtown Plan, or who would like to make recommendations about the plan.