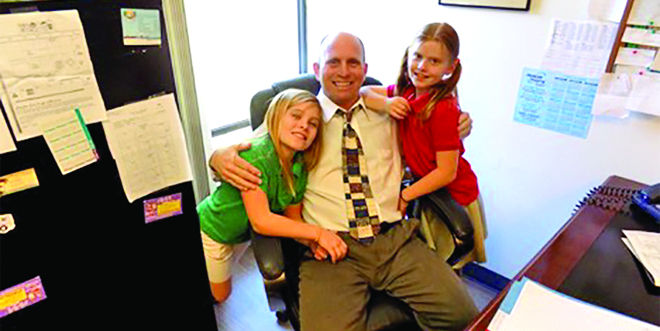 Photos by Barry Gwinn | Papa Guidry in the office with his girls, Aubrey, 9 (left) and Annie, 8.

When I first started going to Dr. Guidry in 2007, I walked into a full waiting room with an eclectic mix of patients. They ranged from the well-dressed to those wearing working clothes, some of whom were speaking Spanish. On the wall was a framed sign, proclaiming that no patient would be turned away for lack of funds. I liked the guy before I ever got in to see him. Apparently, a lot of others liked him also, as his practice was booming. With the exception of a few months in 2012, Nancy and I have stuck with him ever since. He has taken good care of us.

As reported in the February 17th edition of Coastal Breeze News, Dr. Guidry’s practice started going south in 2008 and imploded in 2012. In that year, Dr. Guidry, who had served in three combat zones for the U.S. military (See the February 3rd edition of Coastal Breeze News) was diagnosed with Post Traumatic Stress Disorder (PTSD). He said the therapy and diagnosis enabled him to come to grips with his bizarre behavior, which was ruining his practice and his life. When he was confronted with the fact that he was going to be primarily responsible for raising his two infant daughters, he knew things had to change and that his life would never be the same. “I resolved to devote my full attention to raising my daughters in their formative years,” Guidry said, “My only means for supporting them was my medical practice. I had to get it back on track. No one has ever accused me of being a bad doctor or bad parent. I knew I could do this.” I can report that he is doing it, but it hasn’t been easy. He says that some of his old patients are starting to come back and new ones are trickling in. Dr. Guidry has regained the warmth and focus that I was previously accustomed to. But what about his now school age daughters? How does he manage to care for and nurture them while maintaining and rebuilding his medical practice? I found out one day last spring during a routine office visit.

Our relationship had warmed, as Dr. Guidry seemed to be returning to his old self. We had time, during visits, to inquire after each other’s families. I told him that I had admired the portrait of him and his daughters on the wall of his waiting room. “Would you like to meet them?” he asked, “They’re back in my office right now.” He disappeared from the examining room, went back to his office, and came back a minute later with two of the loveliest most well groomed girls I had ever seen. Aubrey, age 9, and Annie, age 8 had been spending afternoons after school in Dr. Guidry’s back office for four years. My visits usually coincided with their presence there. Although the examining rooms are next door to his office, I never knew that they were back there.

Dr. Guidry has practiced in Marco Island since 1998, but lives in a rural area of East Naples, about 17 miles from his office. He says he has had to raise his daughters by himself after his wife “walked out on him” in 2009. From what I can learn, in all respects, he has developed into a better than average Mr. Mom. The routine he has established for his home, his office, and his daughters is probably unique among practicing physicians in modern times. He plans his days around his girls. They know what they will be doing and what is expected of them, each hour of the day, due to a schedule which Dr. Guidry strictly adheres to. “I try to give them something they can predict,” says Guidry, “If they have daily goals they can meet, it will give them self-esteem. I spend a lot of time talking to them about decisions.”

On school days, Dr. Guidry wakes up the girls (with a good morning song, he says) at 5:51, cooks breakfast and leaves the house with the girls at 7:15. He serves them a different breakfast every day starting with yogurt and sprinkles on Monday and ending with pancakes on Sunday. During the week he prepares different breakfasts, including homemade blueberry muffins (their favorite) on Tuesday and a breakfast sandwich on Friday. Arriving at his Marco Island office, the three of them unlock their bicycles and ride over to Tommie Barfield Elementary (TBE), about a mile away, where Dr. Guidry drops the girls off and returns to his office to begin his work day seeing patients. On Fridays, he goes over to TBE to eat lunch with the girls, dads being welcome then. Otherwise, he won’t see the girls again until the three of them pedal back to his office at 3 PM.

Dr. Guidry’s office is at the back of his suite, it is not large, perhaps 12 by 13. Along the west wall, he has set up a table and chairs, next to a mini fridge and microwave. His desk occupies much of the rest of the room. He tries not to schedule patients at this time of day, so that he can attend to his girls. Snacks are set out for them, after which they are tasked with completing their homework. Following that they are free to draw or play video games. With the office door closed, it is quiet back there. Between patients, Dr. Guidry is able to catch up with his office work at the same time. The girls do not disturb him.

At 5 PM, the trio returns home to East Naples. Before dinner, the girls feed the chickens (They have 21 of them) and gather the eggs. Their three dogs and five cats, all of which live outside, also need to be fed. Dr. Guidry lives on 7½ acres, which includes a 16-stall horse barn, where he boards horses. There is no lack of things to do at “the farm.” Except for Tuesdays and Wednesdays, when the cleaning lady prepares dinner, Dr. Guidry does the cooking and makes sure that each meal contains vegetables, carbohydrates and protein. After dinner, which is served at 6 PM, the girls shower and then must finish their homework, after which they can watch TV. Before lights out at 8:15, the girls must spend 30 minutes reading selected children’s novels in bed. TBE awards points for each book read. “The girls are near the top of the class in reading,” Guidry says, “I try to stay in touch with their teachers by sending notes with my concerns and thoughts about the girls’ progress.” He says he does this almost daily. Dr. Guidry does the best he can, but wishes he could do more. “I regret that as a single parent the girls are missing opportunities to do some things I wanted them to experience,” he says, “things like dance or ballet lessons, singing and music lessons.” However, all things are possible now. Dr. Guidry is finally happy in his own skin.