Don’t Hit the Ball So Perfect 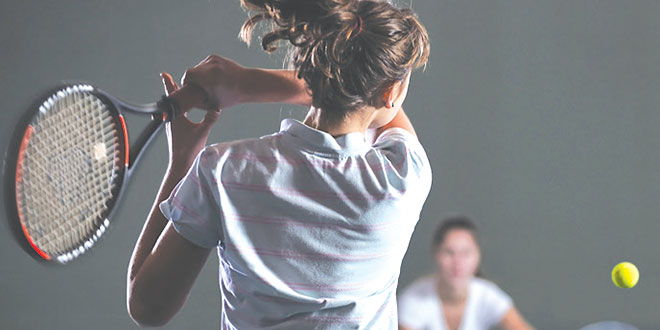 “Doug, don’t hit the ball so perfect to me today. None of the guys I play with hits the ball like you and I want to be able to handle their spins,” Ben offered. Wow, I took a quick double-take, gathered my thoughts, and proceeded to have one of the better learning experiences of my tennis career.

Fortunately, Ben’s sage advice helped me develop into a better coach because I needed to hear this valuable nugget. He was spot on; most of his men’s day opponents chopped and sliced their strokes and he needed to prepare for these types of hitters each week. I rolled up my sleeves and fed more balls with odd slices, and when we rallied, I continued to offer various speeds and paces.

It begs the question, how many students adequately prepare for their next match? In other words, do we drill too much and not implement enough live ball action?

Without a doubt, it is vital to have our star students move through a variety of drills so they hit enough balls on a daily basis. Moreover, as we use unique coaching ideas, the players stay focused and engaged, and often are unaware of how much moving they are doing. And, most importantly, if each drill or game is fun, students will keep coming back.

However, unless we have our top competitors playing tons of games and sets, they will not be completely prepared for their next USTA match.

Earlier today, when I was coaching a young 14-year-old rising junior, she turned to me and said, “Gosh, it’s so different when Matt hits his slice backhand because I don’t see it enough.”

The game continues to evolve, and with the success of Stan Wawrinka (current French Open Men’s Champion), and other one-handed backhand stars, juniors better prepare for more slice backhands in the future. Not only is the slice an effective change of pace stroke, but it is also a great tool for moving into the net and finishing off the point.

If true, could there be some changes to our current state of the modern game? In other words, will more players try to sneak into the net? I’m not prepared to make the big leap and state that the game will ultimately morph into the same style as legend John McEnroe once dominated, but I do believe there is a place for more slice backhands and movement forward.

The bottom line is that we must get our players ready for action by incorporating creative ideas for their upcoming USTA matches. Most young players, especially young boys, struggle with double-faults. Too often, the 12- or 13-year-old combatant tries to hit the cover off the ball on their first serves, and immediately face pressure. Unfortunately, their first serve and second serve have little in common, and then the inevitable occurs – double fault.

During our practice sessions, I urge my rising juniors to use their new topspin serve on the first and the second serve. Therefore, when they miss their first offering, their second attempt is so darn similar to their first one, they usually come through in the clutch.

To further emphasize the importance of the serve, I like to limit my kids to ‘one serve only.’ This old concept is a good one because it illustrates how crucial it is to have reliability with one of the most important strokes in the game. So, I always have my kids play ‘one serve only’ for an entire match.

Ironically, I wished that this particular drill was offered to me as a youngster because it would have helped me become a better low ball volleyer. In my case, my serve was my weapon and I relied too much on winning points with high volleys off bad returns. Had I been limited to one serve, I would have been faced with more pressure, and without a doubt, my opponent would have had more confidence to break me. In the end, it would have been more prudent to learn low volleys, and on some occasions, maybe I would have stayed back and learned how to hold my serve with intelligent groundstrokes.

Therefore, the ‘one serve only’ idea would apply to both strong servers and weak ones as well. Once the new player has confidence in serving, it is only natural they will start to focus on the return game. As the junior game begins to blossom, points will become more interesting and fun.

If anyone has ever had the pleasure of returning serve with the Playmate serving arm, it is an invaluable tool for preparing a player for an upcoming match. About ten years ago, friend Brett Hobden lent me his serving machine for 6 months, and it was so effective in preparing my son for the Florida junior circuit. Since the Playmate serving arm can offer a large variety of spin and power, young Matt was often baffled, and failed to make good returns. However, after a few intense weeks of returning slices, topspins and flat power, he started to get a better read and prepare his feet for his upcoming clash.

In order to get our up-and-coming players ready for battle, coaches must offer a tremendous variety of workouts, match play situations and more, so nothing is left undone. Use ball machines, live feeds, racket spins and more so the student is ready to adapt to any situation during a big encounter. Good luck.