Donna Fiala’s Happy Place It’s Not Where You Think! 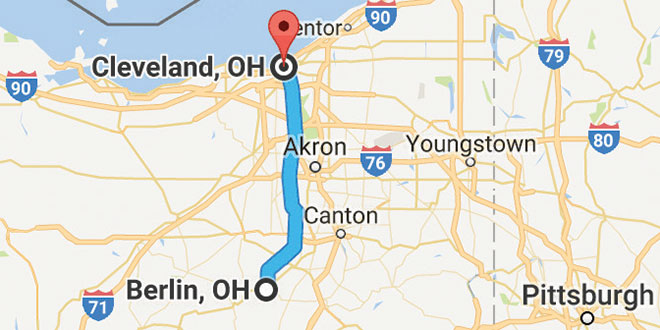 SubmittedBerlin Ohio is 72 miles south of Cleveland. Via I 77, the trip would have taken a little over an hour. Sherri, one of Donna’s daughters, often brings the grandchildren down from Cleveland for a visit.

Donna Fiala has represented District 1 in Collier County since 2000, when she was first elected commissioner. She is, by all accounts, highly respected by her colleagues and revered by her constituents. She has consistently demonstrated her care and concern for East Naples and outliers, Everglades City, Isles of Capri, Marco Island, and Goodland. Until 1974, she had lived in Cleveland. In that year, Donna, with her husband Teddy and four of her children (the fifth came later in Collier County), paid a visit to her in-laws in Largo (near St. Petersburg). They planned a day trip to Naples, just to see what it was like. That day trip turned into a 42-year stay. “We saw this tiny fishing village and my husband fell in love with it,” said Donna, “He left me in Florida to find a house in Naples, while he drove back to Ohio, sold his business, sold our house, and voila, we lived in Naples five months later! Been here ever since.” But, Donna left a large part of her heart in Holmes County, Ohio.

Donna grew up in Cleveland during WWII. It was a bustling amalgam of European immigrants, the largest group of which were Slovenes and Slovaks. Fiala is of Czech 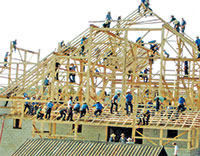 origin. Her mother’s ancestors (Beck) probably came from Germany. It was another group of immigrants however, the Amish, that had the most lasting effect on Donna’s life. Originally arriving in Pennsylvania in the 1700s, the Amish started flocking to Ohio in the 1800s, when much of the good farmland in Pennsylvania was no longer available. As it turns out, the largest per capita concentration of Amish in the United States is in Holmes County, Ohio, about 50 miles south of Cleveland. Of the county’s 40,000 people, almost 18,000 of them are Amish.

The Amish movement was founded in Europe (late 1600s) by Jacob Amman, from whom their name is derived. It is based on the writings of Menno Sims, who earlier (c. 1550) gave his name to the Mennonite faith. The Amish split from the Mennonites due to a perceived lack of discipline. Both groups resided in Switzerland and the lower Rhine area, where neither was really welcome. In the early 1700s, learning of William Penn’s tolerance for all faiths in his Pennsylvania colony, the Amish and Mennonites began emigrating to and settling in Lancaster County, Pennsylvania. With ratification of the Bill of Rights in December 1791 (The first amendment guaranteed the free exercise of all religions), the Amish 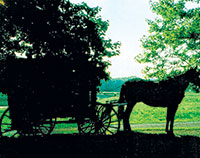 Struck by the bucolic peacefulness of the scene, Donna asked the Millers to tarry in the shade while she took this dreamlikeshot.

pushed westward and now reside in 24 states. Eighty percent of them, however, reside in Pennsylvania, Ohio and Indiana.

In the 1960s Donna started accompanying her mom and sister down to Holmes County to buy fresh bread and eggs from the Amish. “We loved those excursions through the Amish country,” Donna told me, “The three of us formed a special bond during those trips.” They particularly loved the town of Berlin (pronounced BERlin) most of all. After Donna’s mother died in 1997, Donna started driving up to Berlin from Naples, where she and her sister would stay for 10 days at a time in one of the many hotels. (The Amish really draw the tourists.) “We returned there every year to celebrate our mother’s life,” said Donna, “What with the craft shops, furniture stores, and restaurants there was plenty to do.” Donna makes friends easily and often. And so it was, when she met Dennis and Fanny Miller (Old Order Amish) at a Berlin restaurant, where they were working. It happened that the Millers came to Sarasota in the winter to work in a restaurant there. Donna would visit them there and a strong friendship emerged. After an amicable divorce, Donna decided to buy a place of her own

Photos by Donna FialaView of Amish countryside across the road from Donna’s house. A barn, almost identical to this one, was raised from the ground up in just over six hours.

in Berlin. In December 2004, she discovered a new 72-unit development with just the right model home. It was a trim red brick home of 1,300 square feet. Upon completion of construction in 2005, Donna bought locally manufactured Amish furniture and moved in. “It is a cozy welcoming home,” she said, “When I arrive each summer and go in, I feel a great sense of peace and happiness.” The home has two bedrooms, a kitchen, dining area, and living room with a fireplace. Donna goes up for about a month each August. “It is where I recharge my batteries,” she says. That’s not all she does. She devotes two to three hours every day on Collier County business, working from her laptop deep into the night. She brings up a lot of office work. To help her sleep, she watches Golden Girls before turning in. She has the entire series on DVD. “I know what’s happening on every show and know every line,” Donna says, “It’s my sleeping pill.”

During the day, Donna is constantly occupied gardening, socializing and visiting friends. Through the Miller family, she has been welcomed among the Old Order Amish Community and has even been asked to take pictures at an Amish wedding and barn

Dennis and Fanny Miller, relaxing on their front porch, c. 2010. Four years ago, Donna dropped everything to rush up to Berlin. She had just learned that Dennis was near death in a local hospital. He died of heart disease an hour before she got there. Here Dennis is recovering from carpal tunnel surgery.

raising. (Amish highly dislike having their picture taken. They do not like being treated as objects of curiosity.) She and Fanny hang out together every day and are best friends. “I am so involved with Fanny and her family, that you’d think I was one of the family,” Donna says. It is a constant round of visits with their friends among the Amish. Donna drives. On Sundays, Donna attends the nearby Mennonite Church – bible study at 9, service at 10. “The minister preaches a good sermon,” she says. (Mennonites preach in English, whereas Amish services are generally in their German dialect.)

The Millers reside nearby in a modest house on about 3 acres. There is a stable for their horses and a garage for the car of 19-year-old Matthias Miller. There is no electricity and the family travels by buggy. The Amish don’t consider technology to be intrinsically evil, but fear its influence, particularly mass media, in undermining its traditions. The horse and buggy keeps travelers close to the community. Matthias on the other hand is free to own and drive a car. “That’s because of rumspringa,” says Donna. At 19, Matthias enjoys the freedom of rumspringa, (roughly: “running around”), a rite of passage for male adolescents. The 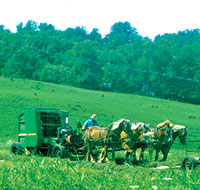 Amish deal head on with the rebellious behavior of their adolescent boys. At the age of 14, the boys are released from most restrictions of the Amish faith and given an astonishing measure of freedom and toleration. At age 21, they must either leave the community, or be baptized and reenter. Most stay and many do not bother with rumspringa. The Amish girls get no such freedom. Their role in life is to keep the home fires burning – literally. They must resign their jobs a month before marriage, after which, says Donna, they are devoted to keeping the home life happy – cooking, gardening, and raising children. Matthias is now running a successful small motor repair business. Most Amish households have an adjunct business of some kind. “The Amish learn from their early years, how to be in business,” says Donna, “They are an industrious, innovative people.” In business, the Amish have adapted ways to use labor saving machines and technology without tapping into the electric grid.

On September 6th, Donna ended her annual Ohio sojourn to return to do battle for her Collier County constituents. It will be trying, hectic, and at times frustrating, but Holmes County will be patiently waiting until next year. It is hard to tell which county she loves more.