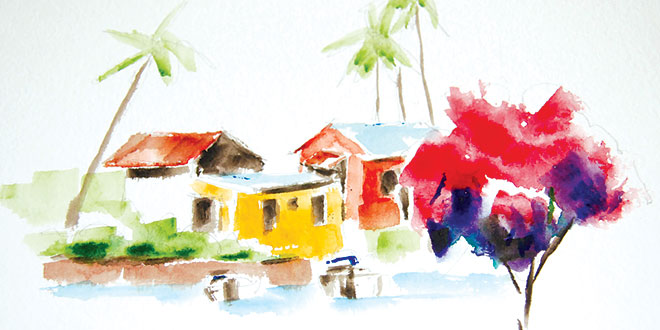 Goodland, its history and its famous cottages are the subjects of a new art exhibit sponsored by the Marco Island Historical Society. Dubbed “Architectural Water Colors of Historic Goodland,” the exhibit features more than 50 water colors and pen and ink sketches by retired architect and Virginia Tech professor Donald Sunshine, along with historical commentary by local author Betsy Perdichizzi.

The exhibit opens with a reception on Tuesday, Nov. 4, from 5-7 PM, at the Marco Island Historical Museum. Visitors will be able to browse through the exhibit until Dec. 31.

“We went a couple of times to Goodland,” explains Donald, who with his wife, Joanna, are spending their third season on Isles of Capri. “I was looking for places to paint. One thing lead to another, and before I knew it, I had done more than 100 paintings and sketches of Goodland…We were so taken with the colors, the modest cottages, the historic aspect of a fishing village.”

And this experience made Donald begin to wonder how the anticipated growth in eastern Collier County is going to impact Goodland: “What is going to happen to it in the future? Along side and in contrast to Marco, it is threatened by development everywhere.”

For Joanna, who also is an artist working in fibers and textiles, the experience was about the people of Goodland. “We are both from the inner-city of Chicago, where you didn’t even make eye contact

with people on the street,” she says. “The people of Goodland are very friendly and gracious; I was flabbergasted, and very impressed with that. They are so proud of their home.”

“The more we were there, and the more I was painting and Joanna was swatting mosquitos, the more we felt that what I was doing was documenting, recording what exists…It took on an importance to me,” Donald adds.

“Being an artist, I certainly don’t pretend for a moment to be historically knowledgable,” Donald quips. “Betsy also has some artifacts and historical photos which will be available for the exhibit.”

“It is wonderful that we have all of these opportunities in the arts in a relatively small area,” notes Joanna. “We have been most pleased with the interest with the arts, and the reception to our work has been just wonderful. It has encouraged us to

participate in a number of the local art fairs.”

In fact, Donald will be part of this spring’s “Wet Paint Live 2015,” the annual local art extravaganza sponsored by the Marco Island Chamber of Commerce, Leadership Marco and the Marco Island Center for the Arts.

Currently, Donald is working on three other series of paintings. Similar to his Goodland series, one of them focuses on Everglades City and Chokoloskee, and includes a water color of the Smallwood Store. He also is working on a series called “Appalachia Country.” The Sunshines spend part of the year in Appalachia and Blacksburg, Virginia, and next summer, the two will have a joint exhibit at Virginia Tech.

The final series is one of social commentary paintings. Among the topics of the work are a village destroyed in Syria, South America’s urban trash heaps and the influx of children over U.S. borders.

“Social commentary is a purpose that visual arts ought to embrace,” Donald explains. “Historically, Picasso’s work commented on the Spanish Civil War. It is a responsibility of artists.”

Still, he admits, the move to do this series may also be a function of getting older: “These are just things that we are confronted with, all of us in this time.”

For more information about Donald’s exhibit — “Architectural Water Colors of Historic Goodland” — contact the Marco Island Historical Society at 239-642-1440 or 239-389-6447. The exhibit will be located in the museum at 180 S. Heathwood Drive on Marco Island.