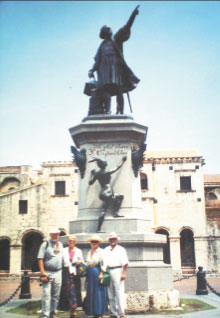 Once we were settled in, we wanted to tour the town. I needed to refill my larder and my husband needed to refill his rum supply. I set out with a friend, Marge, from another boat to look for a grocery store. At first I was just stunned that we would be going to a grocery store here. “What! Are we really going to buy bread here? Are we going to eat food here?” Boy was I a snob then.  We actually bought fresh baked bread here and ate in a very clean and pleasant restaurant. At first my friend and I could not find the bakery. We were then directed to the hardware store. Lo and behold, we got warm home-made bread at the hardware store.

Once we got some needed fresh vegetables, we set out with our husbands in search of another much needed staple aboard a sailing vessel, Rum! We went off in search of the “Mercado,” a grocery store, and bought a bottle of each kind of rum available. This was necessary since our husbands and friends decided they wanted a rum tasting experiment; a “rum off” contest, to be exact. My husband poured a taste of each kind of rum in a small paper cup and passed them around to all of our guests. To a person, BRUGAL Anejo, Extra Viejo, won hands down. Rums are like wines. There is a very distinct difference in aroma, color, taste, smoothness, etc.

There is so much more I could write Plata, the next town we visited, is a large commercial harbor town with its own places to see. One of the sites my husband and our friends wanted to see here was the Brugal Rum Factory. Of

course we had to have a taste test while we were there. Afterwards had a most heartwarming experience.

The mountain top is filled with the usual tourist trap shops with each shop owner vying for your business. One young woman really wanted us to buy something.  She said she had two small children at home and wanted our business. There was really nothing I wanted. I remained firm as it gets to be quite a hassle going into stores. However, I did spend some time talking to her as best I could and looked at the pictures of her children. I guess most people just ignore the shopkeepers or are abrupt. When

I left to say good-bye, she told me I was a nice lady and handed me a tiny charm with a Larimer stone in it. I refused, telling her that I did not even buy anything. She gave me a hug and told me to keep it and remember her. I was really moved. As we left and got into the tram, she was there. I remembered that I had some unopened face cream samples from the company where my son worked as a sales rep. I reached in and gave her some. Through mime, I told her how to use them. She was genuinely thrilled and then showed it to a young man next to her. I felt a little better now. Anyway, this is just an example of some of the folks we met in the DR.

Off to Santa Domingo where the palace of Christopher Columbus’s oldest son,

Don Diego Colon, El Alcazar de Colon, is located. We took a bus to the Capitol and stayed at an old palace, now a grand hotel, “The Palace Nicholas Ovanda.” Santa Domingo 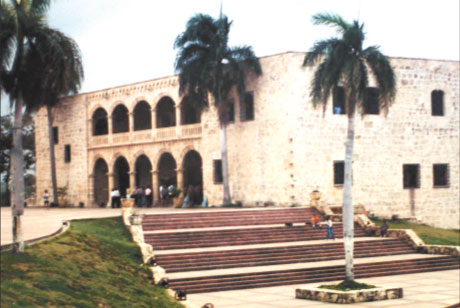 is a grand city with a very rich heritage and beautiful old buildings. We visited so many awe inspiring sights: the oldest cathedral in the Western Hemisphere, Columbus’s Museum and even touched an anchor in a museum which was used by Columbus. The whole city is a living museum. To get around easily and learn more about this historical city, we hired an English speaking driver as our tour guide.

While in Santa Domingo, the four of us, Marge and Don on sailing vessel “HOBO,” and Herman and I on the GRENDEL, had a most memorable experience. One early evening, the four of us were walking alongside Alcazar de Colon. My husband, always the curious one, saw a crowd of people in formal attire on the deck outside the palace. We walked closer when a waiter heard us speaking English and ushered us upstairs to a reception. Drinks were being offered to very important guests on the balcony. Soon the speeches began. We knew that this was a very important event. We clapped quietly when the speeches were over. We soon learned the speakers were Jacinto Paynardo, the Vice President of the DR, the mayor of Santo Domingo, the DR Ambassador to the US and other VIP’s along with the crews of GRENDEL and HOBO. We were surprised that no one stopped us or checked to see what was in my ever present tote bag.

I must say that we really did enjoy our three week stay in the Dominican Republic. The country is poor, but you would never know it by their graciousness and friendliness to visitors to their country.