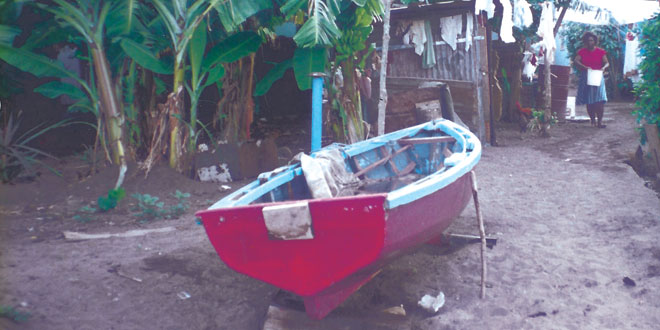 he incessant wind had not let up and the anchorage at Iles de Saints was a bit uncomfortable so we decided that we had to move on to Prince Rupert Bay, Dominica. Wow! We just left the very French, sophisticated, upscale island to make a landfall at Portsmouth, Dominica, which is one of the poorest and least developed islands in the Caribbean. Much of this volcanic rainforest is a national park, which looks very much like a primeval forest with its 365 rivers and magnificent waterfalls. Although the scenery is nothing short of breathtaking, we left the land of croissants and espresso for the land of boat boys, shanties and boa constrictors.

The boat boys came out to meet us as we were approaching the harbor. The first one to your boat claims you as his and it is from him that you are to buy your fruit, vegetables, and arrange your tour of the island. This is how they eked out a living. Although they were very competitive, if you told the next boy that you were dealing with another boy, they leave you alone.

The boat boys are really a study in the development of civilization. They approach your vessel by paddling on a surf board, usually using 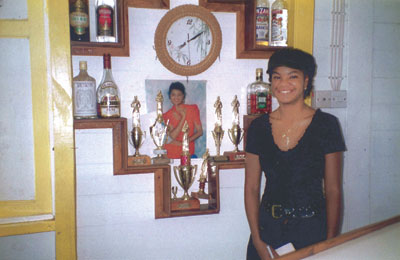 crude homemade oars. Some were wearing nothing more than a loin cloth. They looked quite fierce with a head of Rastafarian dreadlocks. In fact, they were rather passive except to each other if they felt they were being stepped on by a competitor. Then, they were very vocal. We bought some oranges, onions, peppers, and a loaf of homemade bread. The oranges were so sour that we threw them out. No matter. This is how they survive and the few E. C.’s, (Eastern Caribbean currency), that they make on the sale is their only means of earning a living. With all this poverty, we found the Dominicans to be friendly people who are proud of their heritage.

The once fierce Carib Indians who were cannibals and invaded many of the Caribbean Islands are almost extinct with only about 3,000 left. We took a tour of Dominica which included a visit to the Carib reservation. Many of the men were seen sitting or squatting in their huts. They were still sitting in a primitive fashion by the riverside eating something and very promptly we were told by one of them to go away. We did. I guess we were being very rude and made them feel as though they were an 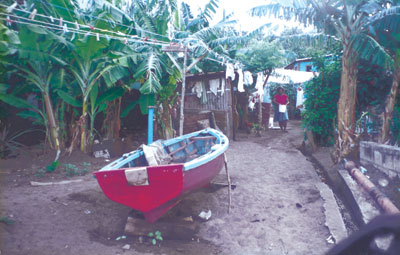 Alley where he lives with his proud boat on premises.PHOTOS BY FRANCES DIEBLER/COASTAL BREEZE NEWS

Many little scenes reflected the real isolation of Dominica. We passed ladies washing their clothes on the rocks by the side of a stream. Men with crops balanced on their heads were riding donkeys, and oxen did the work of modern machinery. All this and more in contrast to the nine passenger van that we were riding in across the countryside.

The next day my husband and I took the Indian River tour which really brought us close to nature. We were taken down the Indian River in a long brightly painted wooden boat which is rowed with homemade wooden paddles by a river guide. No motors are allowed as the noise would disturb the wildlife. We were propelled through this incredible mangrove which had branches and vines hanging over our heads. I was waiting for Tarzan to come bellowing down from one of the vines. The only wildlife that we saw here were huge land crabs, egrets, and many birds of various colors. I had to ask our guide, Reginald, the inevitable question. “Are there boa constrictors hiding here in the trees?” He said, “Yes, but they hide most of the time.” From that point on I watched my head! All we needed to see was a 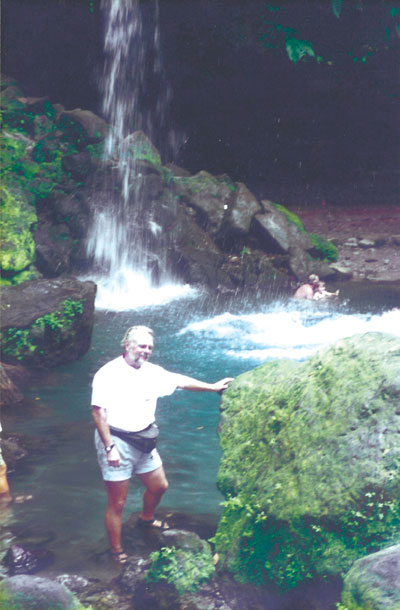 Herman cooling off in stream by a waterfall.

boa hanging lazily from a branch over our head.

All of Dominica is not dense jungle. There were quaint little towns that were not very modern or built up On a more pleasant note, we had a lunch of Jerk Chicken which is very spicy at a local restaurant. Our waitress was a really lovely, young lady. When we went to leave, Herm saw this collection of beauty trophies behind the bar and asked the young lady, named Danny, if they were hers. She proudly smiled and said, “Yes.” She was “Miss Dominica” in the Miss Universe Pageant!

Dominica is uniquely natural. It is a rich tapestry of lush rain forests, rivers and waterfalls. The island is filled with physical challenges of extreme adventure such as climbing its rugged terrain, or snorkeling to see the beauty of underwater volcanos. Dominica sits midway along the Eastern Caribbean archipelago, just a few miles from Martinique to the south and Guadeloupe to the north. It is truly an outdoorsman’s paradise. Hiking, diving, climbing, deep water fishing, are available to all who want to explore this majestic island. It truly lives up to its name, “Dominica the Nature Island.”