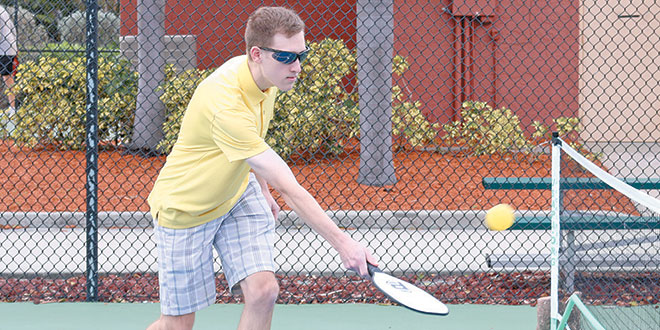 In one of my columns earlier this year, I stated that the serve and the return were the two most important shots in the game. In both tennis and pickleball, we can’t win a point if we can’t get the point started!

While this statement still holds true, I believe that in pickleball, the dink (strategically) is the most important shot in the game.

Also, in a previous column, I discussed “third ball opportunity,” which in the sport of pickleball, puts us into a strategical position where the dink now becomes a vital part of pickleball strategy.

Like most players, when I began playing pickleball, I adapted my tennis skills and abilities to this new sport. If I were executing what would be considered a half volley drop shot in tennis, aka a dink in pickleball, I would usually be executing the shot as an outright winner. However, in pickleball, if I am competing against a well-trained player, I will probably need to be ready to execute several dinks in a row. Therefore, being very proficient in the execution of the dink is a requirement of becoming a successful strategical and aggressive player.

Since we are in agreement that our goal as a good pickleball player is to execute our strategies and play points in the kitchen, we need to understand that we are utilizing dinks to slow down the game, pull our opponents out of position and put them in a defensive posture. While a qualified player can win points with the dink, the main purpose is to attempt to get our opponents to pop up the ball and provide us an opportunity for the spike put away!

So let’s discuss the proper fundamentals of drinking.

First let’s address the grip. Many players make the mistake of using a tennis volley style, shake hands/continental grip for executing dinks. While this grip feels natural and is easy in its usage, it has its restrictions.

I will frequently utilize the front face of the paddle even when I am hitting dinks on the backhand side of my body.

With that said, it is important that we understand the purpose and need for each of these grips, as they are required for executing each specific shot we are attempting to hit. We must program ourselves to be able to unconsciously change grips, as needed, during a point.

When properly executing a dink, I want to start from my ready position. I should always be in this position at the kitchen, because I want to be prepared to execute a volley/spike put-away, when the opportunity presents itself. From this position, I want to lead with the paddle, into the shot and only step into the kitchen as far as I absolutely need to. I want to keep my head up and get down to the ball by bending with my legs, not my back.

Many players make the mistake of just trying to block the ball back over the net with the paddle, when they dink. However, I actually want to use the paddle like a small garden shovel, get the face of the paddle open under 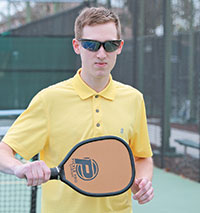 A correct ready position at the kitchen, as shown by Kane Pree.

the ball, and gently guide and toss the ball over the net to my intended target.

Most importantly, once I have completed this delicate shot, I want to lead back out of the kitchen with my paddle first, followed by my feet, reversing the sequence of steps I took going into the kitchen, returning to the ready position. I am then once again ready for a potential volley/spike put-away shot.

Remember, the purpose of the dink, is that we are attempting to slow the game down. A challenge which is not an easy skill to conquer.

Your goal should be, to be able to sustain a continuous rally of dinks at a very slow and controlled pace. You also want to have the ability to deliberately change the pace or cadence of the rally, as well as precisely and proficiently dink both cross court and down the line.

During the week I spent at the U.S. Open Pickleball Championships, I observed all of the Open/Championship level players, drilling and practicing these skills on a daily basis. I encourage players to find a partner and practice both dinking and volleying, to improve your pickleball skills and be able to win more points!

I will be offering adult drill clinics for both pickleball and tennis this summer at the Racquet Center. This is a good time to utilize the off-season to improve your skills and take your game to the next level.

Wayne Clark is a certified professional tennis instructor with over 25 years experience coaching players on all levels of the game. Wayne is also qualified in pickleball instruction. He has been the head instructor at The Marco Island Racquet Center since 2001. The Racquet Center offers clinics, private and group lessons for both tennis and pickleball. Coach Wayne’s Island Kids Tennis juniors program runs year-round and has classes for players from kindergarten through high school. Contact Coach Wayne by email at WClark@cityofmarcoisland.com, by phone or text at 239-450-6161, or visit his website at www.marco-island-tennis.com.