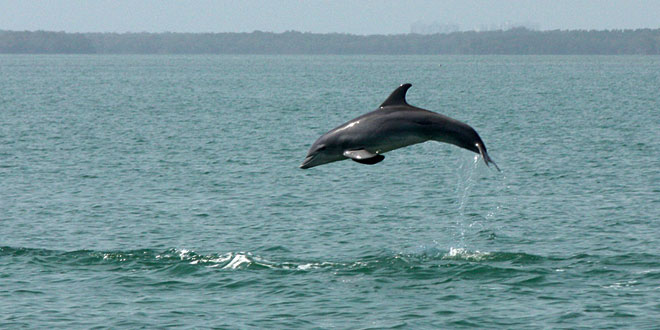 With smile-like expressions on their faces, serious agility that translates to playfulness to human observers and a curiosity that may equal ours, dolphins are WILD animals – marine mammals that need to be treated as such to keep them that way.

“Flipper” is the iconic dolphin whose story created the myth that a wild dolphin is naturally friendly and never a menace. In fact, “Flipper” was a trained, captive dolphin (actually several dolphins) who did tricks on command for food, happily accepting the food and did not bite the hand that fed him.

In reality, a truly wild dolphin is a hunter, not a beggar or moocher of food. Dolphins, like most animals and humans, are quick to take the easy way out. When food is offered, they will take it.

A wild dolphin that has been opportunistic and consistently accepts food from humans turns into a frustrated beggar and does get very aggressive and even threatening when the hand out they expect is not provided. In Florida, dozens of dolphin bites are reported (no telling how many have not been reported) by people feeding or swimming with dolphins. The National Oceanic and Atmospheric Administration (NOAA) Fisheries reports that a woman who fed a pair of dolphins off the coast of Florida and then jumped into the water to swim with them was bitten severely. She said during her week-long hospital stay, “I literally ripped my leg out of its mouth!” Not exactly a

scene from a “Flipper” episode.

It is very tempting to feed wild animals, especially a curious, beautiful dolphin. An encounter with a dolphin is magical. But remember, for that one brief moment of amazement as you toss a fish and it leaps to catch it, you have inched it closer to harm and its ultimate survival. Then you do it again to get that photo…

That human fed dolphin will quickly lose its natural wariness; losing fear of humans, boats and other dangerous things. Feeding it will make it vulnerable to severe injury from propellers, entanglement in fishing lines, gear and nets and even targets for abuse from people who will toss a beer, hotdog or trash at it.

Extensive studies have found, like many mammals, that dolphins survive in complicated social group structures (pods) to protect and feed the members and sustain their population. When wild dolphins are fed, there is disruption to the social group that threatens survival in the wild. Mother dolphins will compete with young ones for handouts from humans and subsequently they are never taught to hunt or forage naturally for food. Again, the younger dolphins lose the ability to fear boats and dangerous situations, causing injuries and death from propellers, boat hits and entanglements. Let’s keep dolphins wild, not kill them with kindness with a handout or for a photo opportunity. 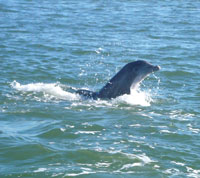 and jet ski wakes, cruising the river, herding mullet in the canals, leaping along the shore and beach. Enjoy them, don’t entice them! There have been a couple incidents in Marco Island waters that are very unique.

Twice dolphins have leaped and landed in a boat on the Marco River injuring the dolphin and passengers of the boat involved. At a congregation of marine mammal scientists for the southeast region of the U.S., these incidents were discussed. It was alarming to the scientists and not found to happen in other areas. General consensus of the scientific community about these incidents was that dolphins were being fed regularly so they were not afraid of boats or jet skis, swimming too close, leaping for handouts and consequently landing in the boats.

For the dolphins’ sake, your safety, and to ensure the dolphin population in our waters stay healthy, please do not feed, swim with or harass wild dolphins. Keep a distance of 50 yards; if approached by a dolphin, enjoy the moment, don’t feed, touch or swim with the animal. Please don’t bang the side of the boat or jet ski, or slap water. Keep the behavior wild. Here are a few tips that you can do to enjoy the encounter but ensure the wild dolphins are not harmed:

– Keep 50 yards from all marine mammals – dolphins and manatees

– Limit viewing to half an hour. Move on – there is so much to do and see in our waters! 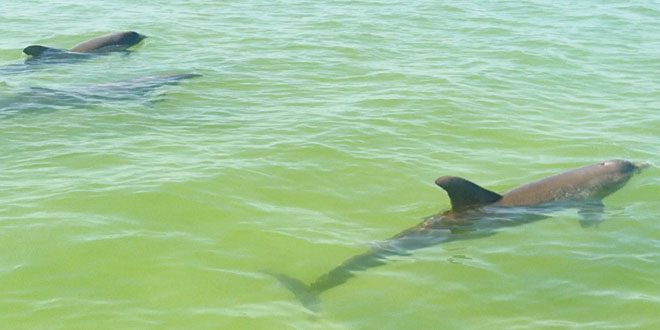 Never surround, encircle dolphins or manatees; give them an escape route

– Do not swim or touch marine mammals

– If approached, put engine in neutral and enjoy the encounter, then move on carefully

– Do not feed marine mammals

To report harassment, injury or strandings, call the 24 hour/365 days per year hotline at 1-888-404-3922 (FWCC). For more information on marine mammals in the Marco Island waters, please contact Nancy J. Richie, Environmental Specialist, City of Marco Island at nrichie@cityofmarcoisland.com or 239-389-5003. “Flipper” is fun to watch, but let’s keep our dolphins wild and free!