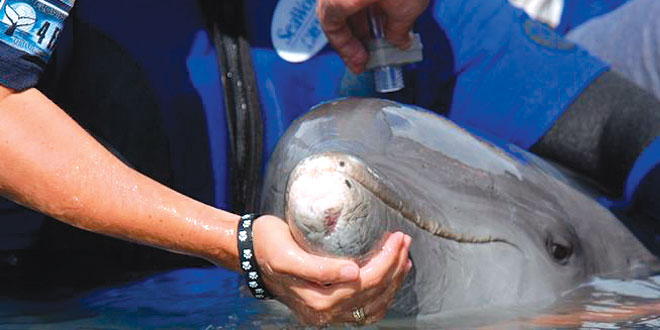 Spend an evening with Captain Chris Desmond, the founder and director of the 10,000 Islands Dolphin Project, and his survey team of naturalists and biologists. Hear stories of the amazing marine creatures and other wildlife they encounter aboard his boat the Dolphin Explorer – even the Florida panther has made an appearance.

A lecture and film, sponsored by FGCU’s Renaissance Academy, will be held on January 9 from 5:30 to 7:30 PM at the Marco Island Center for the Arts. Tickets for this event, which includes a light buffet, are $30 per person; reservations are needed as space is limited.

Desmond’s Dolphin Project concentrates on studying bottlenose dolphins in their natural habitat. More than 200 dolphins have been identified, studied and tracked since the project began in 2006. Dolphins are identified by their dorsal fin, or flukes, which act much like fingerprint on a humans. The Dolphin Explorer leaves twice a day from the Marco River Marina, each tour lasting three hours, and the

public is invited to join in the survey team’s work.

Recently, Desmond and his team, together with several State and Federal agencies and members of the community, played a crucial role in saving the life of Seymour. A well known Marco marine mammal resident by the Dolphin Explorer, Seymour was discovered with monofilament fishing line wrapped tightly around the base of his fluke, or tail. This would ultimately become a life threatening condition. Seymour was “rescued,” the fishing line was removed, blood was drawn, x-rays were taken, medicine dispensed and a satellite tag was mounted to his fin – all in a little over three hours. Seymour’s story made national news, and the 10,000 Islands Dolphin Project has been included in the National Geographic book 100 Places That Can Change Your Child’s Life.

The Center for the Arts is located at 1010 Winterberry Drive. The Center is open Monday through Friday from 9-4 pm. For more information, call 239-394-4221 or visit the Center’s website at www.marcoislandart.org.