Does your brain get in the way of your success? 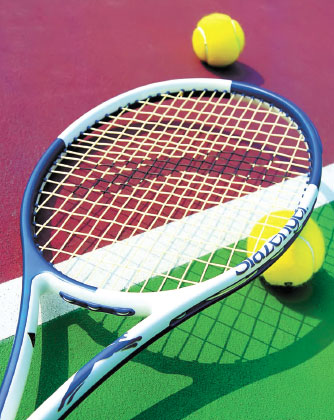 Doug, did you see the latest tip in Tennis Magazine?,” one of my enthusiastic stu­dents asked me recently after one of our work-outs. My main concern is that the student is on the right track; she is begin­ning to do the essential items to win ten­nis matches but due to her curiosity she just may screw things up. In other words, a little bit of knowledge is a dangerous thing as people tends to over analyze cer­tain bits and pieces and then they become mentally slower on the tennis court.

For example, my improving student is rapidly becoming a steady baseliner and now has the confidence to stay back and frustrate her opponents. However, after watching hours and hours of the US Open, she now wants to incorporate a drop shot in her game. Now, if she wants to add more tools to her game, how can that be a bad thing? First and most impor­tantly, if her ability level hovers around the 3.0 level, she will not able to hit an effective drop shot for the foreseeable fu­ture. If I acquiesce to her request, she may regress and lose confidence.

The tennis stars that we view on tele­vision are rated 7.0 and have skills that are literally off the charts and we have to be careful not to try to implement many of their strokes especially drop shots. Sever­al years ago, my top student was a star at Lely High School and he was starting to climb in the Florida USTA rankings and he was a very skillful tennis player.

In particular, he had outstanding footwork and solid ground strokes from both sides of his body and was extremely patient. One day, he asked me if we could spend considerable time on the drop shot as he felt that it would carry him to a high­er level. Ironically, this young man was going through a huge transformation; we were altering his paradigm – no lon­ger was he a passive baseliner who never came forward but now a forceful player who knew how to end the point with flair!

So, I was reluctant to have him go backwards and become a touch player or a less aggressive athlete. Too often we would engage in a great baseline strug­gle and he would begin to gain an edge but quickly give it away with is ill-timed drop shot. So, contrary to what his father had suggested, I told him in no uncertain terms that he must abandon this new strategy and continue to focus in on his more powerful game.

Immediately, after college gradua­tion, he went on the Pro Tour and was so ambitious that he was able to win a few tough clay court games against French Open Champion Gustavo Kuerten. We stuck with his core strengths and did not deviate from the plan and he became an excellent college tennis player. The key is to understand what your plan is and then begin to execute it or you will be confused on the tennis court.

Years earlier in my computer devel­opment, I was so excited to learn Win­dows that I wanted to use several word processors and my mentor told me to hit the brakes and learn just one. Now, al­most twenty-four years later, I have fully grasped one word processor and now re­alize that it would have been a big waste of time to delve into several others.

At the end of the day, the player who makes the fewest errors continues to win the big matches. If the player is on track with his/her tennis development, it is im­perative to work on his/her strengths and not get bogged down with ‘trick shots’ or strokes that do not enhance growth. Be­fore you embark on new strokes or strate­gies, consult your pro. Good luck.

Doug Browne is the Hideaway Beach Tennis Director and the new Collier County USPTA Pro of the Year. Additionally, Doug has been the International Hall of Fame Director of Tennis this past summer. Doug has been writing his tennis column for the past fifteen years and welcomes your feed­back.