Do you know the 10 Commandments in tennis? 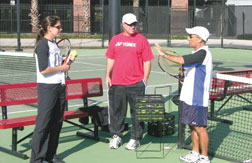 Please forgive me as I may sound like I am preaching but I feel it is necessary to point out crucial tennis etiquette information as many tennis players begin preparation for both USTA tournaments and local league competition. A group of tennis friends have assisted me in our new 10 Commandments of Tennis and here is our first list:

• Thou shall be kind to thy doubles partner.

• Players must be fair and honest with their opponents.

• After a tennis match, invite your opponents for lunch.

• No profanity on the tennis court.

• Be kind to the visitors – do not clap when players make mistakes.

• After your team match, stay around to cheer on your teammates.

• Resist the temptation to coach your partner or partners.

• Err on the side of caution, be gentle with your delivery, opponent.

• Kindly deliver the score after each point, thus avoiding conflicts.

Not long ago, I addressed the importance of being a great doubles partner; no matter what happens on the court; do NOT blame your partner for the loss! Here is an example of the insecure player: (the player is talking privately to the captain or coach) “Susie is definitely a player on the rise but she just doesn’t know how to win the big points,” or “Tom and I just don’t play well together so I would suggest that you don’t team us up in the future,” Jim offered to the captain after a loss. These subliminal messages are easy to translate and it is curious why one would waste their time with such nonsense. In each example, the person is not taking responsibility for their own actions. It is clever to tell the captain that ‘Tom and I don’t jell,’ but it is disingenuous to offer this comment. Last fall, one of the visitors asked me to address the point about when people should applaud or not and I was happy to assist. Simply stated, when the home team only cheers on their fellow club members, it can be quite lonely for the visiting team. Therefore, the home fans should make a point to occasionally cheer for the visitors. No matter what, be careful and thoughtful as most points end in an error and we don’t want others to feel bad when they miss a simple stroke. Usually, when the road warriors feel comfortable at your facility, there are few arguments on court. Moreover, when there is a good vibe, the visitors will desire to stay around and have lunch and then everyone is the winner!

One of my club members kidded me the other day and said, “The last time I checked, we weren’t playing for big money, so I just want to have fun when I’m on the tennis court!” she added, as we were joking about our coming tennis schedule. It’s funny how people lose sight of what really matters in life, not just tennis – being kind to one another is really the only way to go as we have to look at the big picture. At the end of the day, it is just a tennis match and doing anything possible to win is wrong. When players elect to play team tennis, they must throw out their individual needs and start thinking of others and that often begins with the captain. People often discuss the challenge of being a captain and that is due to the selfishness of some people. The best team captains look beyond their own desires and think of the totality of the group. Additionally, they communicate well and offer open discussions. It is fruitful to have open dialogue so everyone feels that they are involved in the process. As long as I have been associated with this great game, it has been called a gentlemen’s game (or ladies game) and we must not lose sight of that awesome intent. When I was on the tennis circuit, there was a joke about cheaters: “When in doubt, call it out!” Well, when I think of the 10 Commandments in Tennis, I think of being kind, supportive, giving and most important, I think of honesty. Team tennis starts next week, practice the 10 tennis commandments and you will have an incredible season. Good luck.

Doug Browne is the Hideaway Beach Tennis Director and the new Collier County USPTA Pro of the Year. Additionally, Doug has been the International Hall of Fame Director of Tennis this past summer. Doug has been writing his tennis column for the past fifteen years and welcomes your feedback