Do you know how to put the ball away? 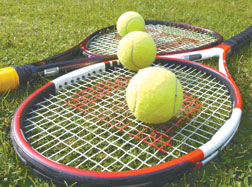 With all the power in today’s game, there is a lot of pressure on tennis players to put the ball away in dramatic fashion. Unfortunately, a good majority of tennis competitors do not have the right skills to execute winners all over the court. If I had to pinpoint a good place to hit a winning stroke, it usually occurs at the net. The key is to understand your opponent’s tendencies so well that you can predict his next move. For example, if the server is able to hit forceful serves down the middle near the “Texas T” (where the center line meets the service line) the returner often sends the ball closer to the center than to the crosscourt angle.

In other words, when tennis players stand near the center of the court, they are unable to produce wicked angles. So, when the intelligent server places the ball away from the corners or angles, this is a set-up shot for the server’s net partner and he can hit a volley ace. Now, there is one more component in executing the perfect put-away ball. So far, the server has done his job with great placement and his partner is ready to be aggressive at the net to prepare for the final shot. The last piece to the puzzle is to know WHERE to hit the victorious shot. In order to gain confidence in a big match, always look to the middle of the court for the big stroke whether it is a groundstroke or volley. Why?

Due to nerves or just imperfection, targeting the middle of the tennis court is a safe and effective move because the ball usually lands in the court of play. Conversely, when competitors attempt to hit a sharp ball near the alley, the risk is often too high and errors will mount. Therefore, when you are at the net and wish to poach, rip the volley down the middle or split your opponents and good things will happen. One of the best doubles strategies is to learn to hit low lobs over charging opponents. The low lob or offensive lob is a stroke that many different ability levels can learn and use effectively.

For instance, when a person hits a weak second serve, returning the ball over the net person may produce a quick winner or could be a fabulous set-up shot. Even if the server scatters to fetch the tough offensive lob return, she may only hit a weak stroke and now the returning team may be able to hit a simple overhead smash. Another benefit of the offensive lob is somewhat of an ironic twist; when the low lob is hit too short, many opponents’ miss-hit the overhead smash and make errors. This particular scenario occurs during high school tennis all over the world as teenage boys often over-hit this ultra-difficult stroke and continually smash balls into the back of fences from Portland, Maine, to Portland, Oregon.

Last, but not least, if you desire to hit winning shots or put-away balls, learn to develop a short stroke. Simply put, with so many senior players losing a step or two (I can relate) it is crucial to learn how to hit a soft and short return as so many tennis players are not able to run it down. It is essential to point out that one does not have to hit a drop shot. The drop shot, deftly executed by tennis professionals, is not the right stroke for most recreational players as it is too challenging and may produce too many errors. But, most competitors have the ability to hit a soft return near the service line and will net winners or errors. In order to perform a soft, short stroke, a weak grip is a must. In summary, just about every tennis player on the planet would like to end the point with a put-away stroke and my recommendation to achieve this goal is to try the following three strategies:

1. Rip the volley down the middle of the court splitting the opponents.

2. Possess the offensive lob on the return of serve or when one faces net rushers.

3. Utilize the soft, short service return with a delicate grip for best results.

Last, if you ever have the opportunity to scout your next opponent, you will quickly learn their on-court tendencies. Armed with this knowledge, it will be easier to hit put-away balls because you can better forecast their shots. Good luck and please let me know if you are implementing these sound ideas.