Do You Have the ‘IT’ Factor? 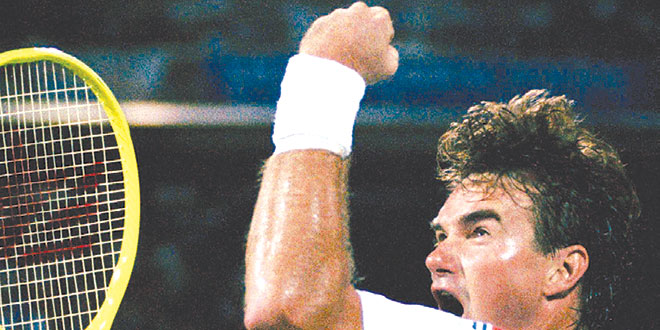 There is an abundance of outstanding athletes in this world, yet some stand out from the rest of the pack. We are riveted by their excellence.

What is the balance between genetics verses blood, sweat and tears? How did these athletes come by this elusive “IT” factor? DNA? Natural drive?

My personal take is that the legends in each sport have a special genetic component that separates them from the pack. However, it must be noted that each special athlete must add the hard work quotient, or we will not see the amazing results. How does one recognize a person with the “IT” gene?

To me, this person exudes a quiet confidence that allows them to believe they can succeed in the most difficult circumstances. When the pressure is overwhelming, this special breed of cat steps up and relishes the moment.

Going back to my childhood in Milwaukee, Wisconsin, I grew up with this type of confident person who knew how to yield this influence even when we played table tennis. It was uncanny. Anytime there was something riding on the outcome, this young man pushed out his chest and proceeded to come through in the clutch.

In my opinion, what truly separates this tennis player from the others is a lot of winning, and that includes practice sessions. If we move back in tennis history, legend Jimmy Connors and his agent broke away from the rest of the players and participated in the events they wanted to, even if they had to form their own tour. In doing so, Connors amassed quite a record of Tour victories and his confidence grew by epic proportions. By breaking away from the rest of the pack and exploring new destinations and competing against new people, Connors gained experience he would have never amassed had he not traveled his own path.

Clearly, Connors was winning big point after another, and he felt invincible. By the time he entered a Grand Slam tournament, he literally ran to the court to see who his next victim would be. When winning becomes a habit, confidence soars, and the player has calmness when facing pressure.

On the other end of the spectrum, an athlete on a losing streak feels like they can never recapture his or her winning ways and begins to tense up and force the action. This self-doubting player is in quite a fix, and now requires a top coach to help dissect the problems and assist with building confidence.

There is such a fine line between success and failure; the key is not to get too high or too low. The tennis player, who believes that luck was not a part of his achievements, is simply fooling himself. I was not present 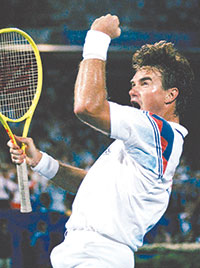 when New York Yankee great Joe DiMaggio put together his 56-game hitting streak, but it doesn’t take a rocket scientist to know that the ball slipped past a few dozen fielders during that incredible span.

Do you remember the bizarre high-ball that American Andy Roddick poorly judged during the Wimbledon final against Roger Federer? It appeared that young Roddick was on the verge of winning his first Wimbledon crown when “Fed” mishit a ball that may or may not have landed in, but at the last moment, Roddick lunged and tried to hit a high volley and failed. This commentary is not to criticize Roddick because he misjudged a strange ball, but more to explain that the great ones need a little help sometimes.

There are countless situations in tennis where the end result is altered by luck; Rafael Nadal had a relatively easy passing shot against Novak Djokovic in the Australian Open Final when he missed the stroke by an inch and then lost the match. In hindsight, Nadal would not have let up and just go about his business and hit a decisive stroke.

In my own career, the ball has bounced in the right spots as well as the ball missing the mark, and it clearly affected the outcome. Is it the cosmos making a strange statement from above? Gosh, I don’t have enough knowledge of the supernatural or whatever to even venture an educated guess, but something seems to happen in the world of sports.

To me, all of the special “IT” athletes seize the moment and love both the process and the actual event. It is said that basketball great Larry Bird would purposely practice the most difficult and usual shots from the wackiest areas of the floor.

Why? From experience, Bird was cagy enough to know that he wasn’t the quickest NBA player and had to be creative to get a shot to win a big playoff game.

Yes, I witnessed such a stroke against my Portland Trail Blazers in his last great game before retirement as he faded away from two defenders and banged one in to force triple overtime.

Just last week, young Rory McElroy drained the key putt to put away golfers Ricky Fowler and Phil Mickelson and claim his fourth Grand Slam title. Due to his recent winning streak, he had no doubt as he lined up his putt and stroked it with a quiet confidence that left no doubt who is the best golfer today.

So, any time you have the opportunity to witness true greatness, take a seat, get comfortable and enjoy the ride. There are just so many “IT” athletes in all sports, and we must witness their quest to be the best of all time.