Do Not Disturb Nesting Sea Turtles 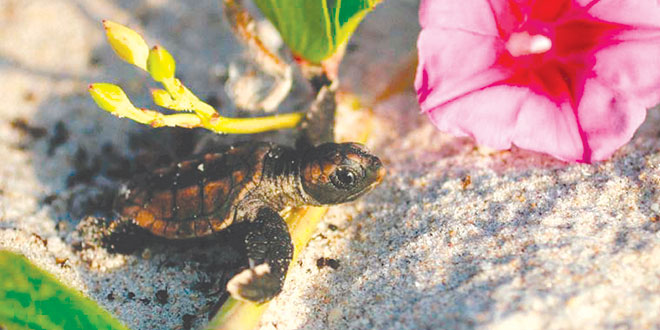 Sea turtles have begun nesting attempts in the area. Good time to post a few reminders about proper sea turtle etiquette. It can be thrilling to watch a sea turtle crawl onto the beach at night and dig a large hole in the sand to lay dozens of eggs. Just remember that “Do not disturb” is the best behavior to follow when observing a nesting sea turtle.

The Florida Fish and Wildlife Conservation Commission (FWC) asks people not to get too close, shine lights on, or take flash photos of nesting sea turtles.

Spring is the beginning of sea turtle nesting season in Florida. From now through the end of October, thousands of sea turtles will land on Atlantic and Gulf coast beaches to lay their eggs. With Florida hosting one of the largest loggerhead nesting aggregations in the world, this becomes an opportunity for residents and visitors to play an important role in conserving these long-lived reptiles. People can help by taking turtle-friendly precautions on the beach.

“Take care when you’re on a Florida beach at night and do not disturb the nesting sea turtles,” said Dr. Robbin Trindell, who leads the FWC’s sea turtle management program. “People can help save threatened and endangered sea turtles by giving them enough space and privacy to safely and successfully lay their eggs. It’s as simple as keeping your distance and avoiding shining lights or taking flash photos of the nesting sea turtles.”

Loggerheads, leatherbacks and green turtles are the primary species of sea turtles that nest in the Sunshine State. In 2014 had 86,870 nests recorded statewide.

“Conservation actions of Floridians and visitors to the state may have contributed to the general upward trend in sea turtle nest numbers in recent years. That’s wonderful news for the sea turtles,” said Trindell. “However, these species still face significant threats during their long-distance oceanic migrations. Whatever we can do to help our sea turtles will make a difference.”

Ways to protect nesting sea turtles and their hatchlings:

Remain at a distance from nesting sea turtles and hatchlings.

Remove chairs, canopies, boats and other items from the beach at night, because they block the movement of turtles and hatchings.

Turn off or shield lights along the beach, in order to prevent hatchlings from getting confused and going toward lights on land instead of the salt water, where they belong.

Fill in holes that people dug in the sand during the day, so nesting sea turtles and hatchlings don’t fall in and get stuck there at night.

Correctly dispose of fishing line, so it won’t entangle sea turtles and other animals.

Remember it is illegal to harm, harass or take sea turtles, their eggs and hatchlings, including getting too close to a nesting female.