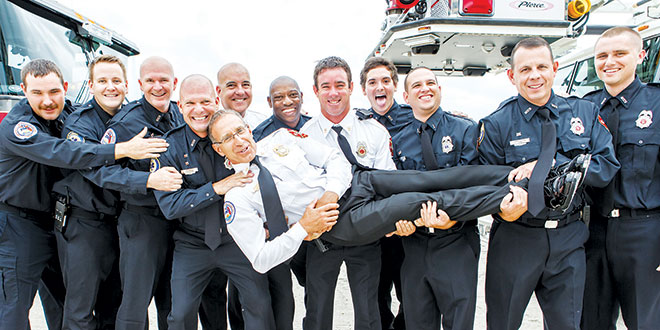 The ceremony, led by Fire Chief Michael Murphy and Deputy Chief Chris Byrne, included special traditions unique to firefighters. Fire Chief Michael Murphy presented Schultz with his duty fire helmet. A golden axe, which was a gift from the Professional Firefighters of Marco Island, was presented to Schultz by Captain Dustin Beatty. His retirement celebration cake was then cut by Schultz using the fire axe, yet another tradition.

The ceremony was attended 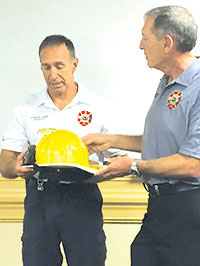 by the City Manager, members of the Fire Rescue and Police Departments and City of Marco Island staff.

Asked about his experience as a firefighter/EMS, Schultz says “everyone wants to feel like they made a difference.” That attitude is reflected in his work and legacy.

Schultz, affectionately known as “Scotty” by fellow firefighters, joined the Marco Island Fire Rescue Department in 1981. Aside from his routine duties, Schultz stepped out on his own to 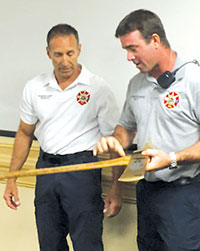 A golden fire axe is presented to Schultz by Captain Dustin Beatty.

develop the training program. He saw the need in the department and he took his ideas to his supervisor.

Schultz says he would like to think that he “moved the department forward in the area of training, officer development and fireground safety.” He started with shift training, and eventually, department training. His promotion to Shift Commander came with the added responsibility of training the entire department.

We asked Chief Schultz if he planned on continuing to work after his August 28 retirement. He said he will try a full retirement, which he will enjoy by spending family time with his fiancé Jill and her two daughters, and his two young daughters, Alexia, 11 and 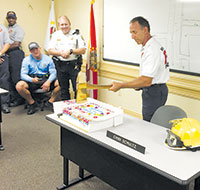 The cake was cut by Chief Schultz in firefighter tradition- with an axe.

Sophia, 7. Retirement will allow him to attend the girls many afterschool activities. Further, daughter Alexia recently earned her scuba diving certification, a major family sport, since both he and Jill are divers.

When asked about the friendships formed with his co-workers, he tells us “it is a job unlike any other” where “one-third of your life” is lived with other firefighters. Schultz tells us that he will try and stay in touch with his “extended family” at the fire-rescue department.

While the fire rescue department does not keep statistics on individual firefighter performance, it is generally accepted that Chief Schultz participated in innumerous service calls over his 34 years on the job, saving Marco Island resident lives and property.