Discussion on Hotel to Come Before Council 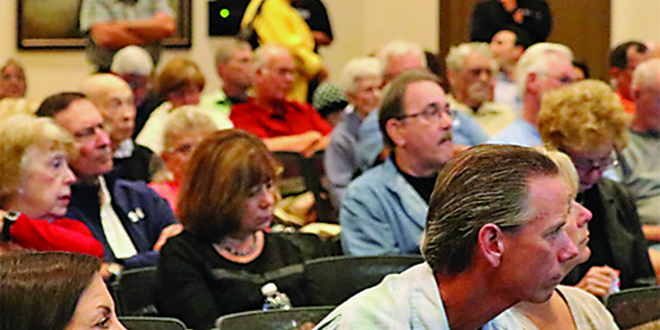 If the representatives of Small Brothers, the corporation which is proposing a potential hotel at the corner of Park Avenue and West Elkcam Circle thought they would have the opportunity to change some minds by holding a Town Hall Forum to allay fears regarding their proposal, they were disappointed on January 10.

Approximately 150 residents showed up at the informational meeting and were not in a listening mood as the representatives attempted to clear up some of what they considered to be misconceptions regarding the project.

“Misinformation that was circulated during, before and after the election caused fear to become the driving factor of the discussion about this project and not the benefit to the community,” said Patrick Neale, attorney for his client, the Small Brothers.

The developers came to city staff in the summer of 2016 to receive guidance regarding their proposal and work through some of the details before starting the public hearing process before the Planning Board. In September they were ready to proceed with the first of what should have been a number of public hearings on their proposal in front of the public and city officials.

The initial proposal was for a 165-room hotel on their property, to include a parking garage for patrons with a pool deck above for guests, an upscale restaurant for the hotel and the public, with a proposed building height of approximately 100 feet.

To reach the number of rooms required to make the project economically viable, the developer proposed purchasing “density credits” that were believed to be assigned to the original Glonn Property PUD, prior to that property being sold to the city.

Opposition to the project quickly came from the neighbors at Joy Circle who showed up at the Planning Board Meeting in September and alleged the city was involved in “secret negotiations” with the developer. The proposed project morphed into a nasty campaign issue during the fall with signs cropping up that urged voters to “Save Our Park.”

“Nothing could have been further from the truth,” said Neale. “The building and its amenities were all to be built on our property, not the park. That was an outright fabrication to create fear and cloud the discussion. The process we followed was the same that any potential developer would have done, allowing us to prepare for multiple hearings before the Planning Board and City Council,” said Neale.

The petition by the developer to create a Planned Unit Development (PUD) would have necessitated the city being a co-applicant for the project. The original referendum which voters passed to purchase the park spoke to the potential of “public/private partnerships” being one of the options available to the community if they purchased the property, which eventually the city did.

In the fall of 2016 Small Brothers put the project on hold, but not until after they had held some open forums to hear the concerns of the public. On January 10 they held a meeting at the Marco Island Historical Society to update residents 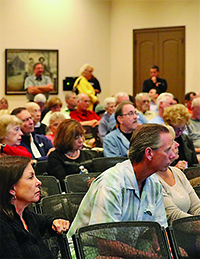 Photos by Steve Stefanides: The informational meeting given by the Small Brothers was well-attended

on their revised plans for the property that they own.

Changes being proposed were as follows:

The developers hoped that the community would see how the project might act as a catalyst for revitalization of the Mid-Town District and pointed to its consistency with the Comprehensive Plan and the availability of moderately priced lodging on the island.

Skepticism and mistrust still permeated the atmosphere in the hall that evening and few minds were changed. That feeling was best encapsulated by a final comment made by an attendee; “Why are we even here, we just elected four people who all promised us during the election they would not support this project.”

Those four councilmen will be part of the seven who will vote on Monday evening as to whether the city should continue to be a participant in a public/private partnership with the developer, while allowing the public hearing process to move forward, giving the property owner and the public equal opportunity to make their cases.

City Council will meet at 5:30 PM in Council Chambers on Monday, January 23rd to discuss this and other business before them.

Late Breaking News
Late in the day on Tuesday, January 17, Small Brothers announced they had successfully completed negotiations with the HYATT Hotel Group for the management of the proposed facilities.

“We believe the market, location and the Small Brothers development plans for the project offer the opportunity to create a one-of-a-kind hotel at the center of a destination that offers the casual sophistication and fosters a sense of discovery that characterizes the Hyatt Centric Brand,” said Mark Chase, Vice President of Real Estate & Development at Hyatt Hotels. “The Small Brothers are a valued partner and it is our privilege to work together again to develop a first class, market leading hotel.”

City Council will meet at 5:30 PM in Council Chambers on Monday, January 23rd to discuss this and other business before them.