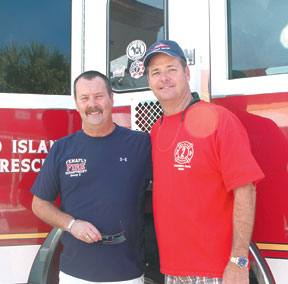 In an instant, a natural disaster can take away everything. Assistance is needed immediately. The basics: food, water, shelter, and in the case of Hurricane Sandy victims, warmth, are immediate necessities. There are those who go into survival mode and yet make every effort to accommodate their neighbors as well as themselves, like First Responders. Once basic needs are met, one can try to ‘dig themselves out.‘ For those close to an impacted area at heart, but physically far away, it is hard to sit idly by while every cell in your body wants to be ‘there’ to help. The wait for information can be agonizing and the desire to help overwhelming.

Help is what Marco Islanders are set out to do. Tom Bogan of the Marco Island Fire Rescue Department is from the New Jersey area directly impacted by Hurricane Sandy, as is his friend, Paul Cantwell. Paul retired to Marco Island after serving 30 years on the police force and another ten as a volunteer Fireman/EMT with the department in Tenafly, New Jersey. Paul volunteered to drive a U-Haul truck to the impacted area to deliver the donations, if and when donations could be gathered.

Donna Niemczyk, also from New Jersey, assisted in getting the word out to the many organizations she has worked with in the past. Soon, the “Under the Boardwalk Penny Drop” Disaster Relief effort was underway. By the time this edition of Coastal Breeze News hits the streets, the truck, filled with donations, will be on its way to assist those in need.

Just because the truck has left doesn’t mean the need diminishes! Your tax deductible donations are needed and checks can be made to the Marco Island Fire Rescue Foundation and dropped off either at the Fire Department or Mutual of Omaha Bank. Know that your donation will go to areas known to be in desperate need. A committee of representatives from several trusted organizations including the 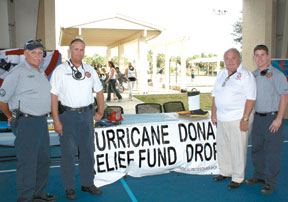 Tom Bogan’s daughter-in-law, Lauren, has immediate family in the area including her mother and grandmother. Her mother stayed through the storm by herself, and has been without power or water ever since. Although their home survived the storm with only a spruce fir falling on it, her mother insists she is fine. Communication is coming from a cell phone charged by a car battery. The car cannot be moved until the tree is removed. Even if it could, downed power lines and open gas lines cause additional hazards. Heat is being provided by burning wood in a fireplace. Her grandmother held a barbecue when she realized there was enough propane left in her grill to cook something. She says “things are hard but hopeful.”

“People are beginning to dig themselves out,” Lauren’s mother said. “People are picking up pieces of the boardwalk, salvaging what can be used.” A sense of camaraderie is being built as people work together to pick up the pieces.

Being the community we are, we will help in any way we can. Keep in mind, having one more person to shelter or one more mouth to feed may not be easy for survivors. So, unless you’re bringing something vital to the area like a load of generators, like father to Marco Island Fire Rescue Steve Hagmann did; or a U-Haul truck filled with cleaning supplies, baby needs and warm clothing, like the one Paul is driving; or unless your volunteering to do some major clean up work, think twice before heading to the impacted area.