“Did You Ever Have A Family?” 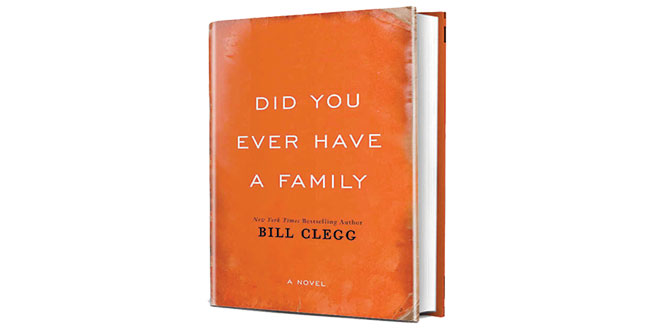 “Seek the lofty by reading, hearing and seeing great work at some moment every day.” ~ Thornton Wilder

Lolly Reid and Will Landis are getting married in the garden of her mother June’s spacious home in small town Connecticut. Her home has never been so full. Her ex-husband Adam is staying over, Lolly and Will of course, and June’s much younger boyfriend Luke Morey. Things had wound down, everyone retired to their rooms for the evening except June had gone outside, near the wedding tent, propped herself on a makeshift “bed” of two folding chairs, where she dozed off.

She awakens to unspeakable horror. The house is engulfed in flames and no one is saved. June is alone. Luke’s mother Lydia is now the only person alive to whom June has any connection. But it is not enough. Lydia reaches out to June who fends off the proffered hand. June grabs her jacket, hops in her black Subaru and starts driving. We next meet her in a small oceanside motel in Washington state where she speaks to no one and stays out of sight for the most part, except for walks on the beach and a trip to the ATM machine for her monthly room rent.

The novel is meant to be an exploration of not just grief but crushing grief – can and how do people survive it? These two mothers are the main characters but there are also Will’s family from the West coast, and the other people in that small town who loved Luke.

Clegg uses eleven characters to tell the story. Each chapter is named for a character and Clegg either lets them narrate in the first person or uses the third person to layer the context for the reader. A few of the characters only get one chapter each, but the others reappear throughout the book. Some readers may not be comfortable with such a format, but it did not impede the story development in my opinion. A couple of the characters were superfluous and added nothing of importance, but their backstories were interesting. I found the story engrossing enough that I read it in two short sittings.

“Did You Ever Have A Family” is a nice read, but I did not find the prose of literary quality at all. He uses cliches frequently, sometimes two in one sentence. It was longlisted for the Man Booker prize. Perhaps the committee was dazzled by the fact that a literary agent actually penned a novel and/or that he used an unusual format. There are, however, some very poignant passages, especially those regarding grief. In “Dale,” Will’s father is narrating how his family is dealing with their loss: “We talk less now. There are car rides and Sunday mornings and entire meals when Mimi and I don’t speak a word to each other. Not out of anger or punishment, but we’ve learned that grief can sometimes get loud, and when it does, we try not to speak over it.”

Rating: 3.75/5.0. Available at all the major vendors and at our public library.

Happy Halloween! Remember to thank our heroes and she-roes on Veterans’ Day.