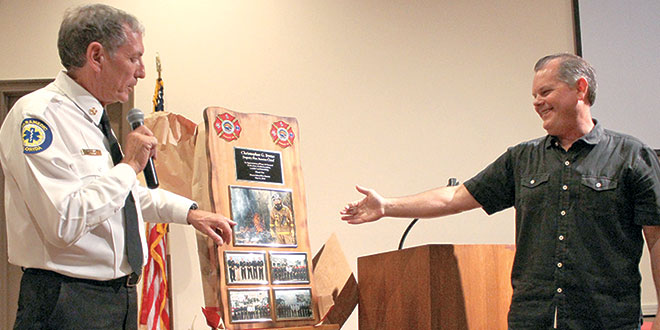 On May 27th hundreds gathered in the Rose Hall Auditorium at the Marco Island Historical Museum to bid farewell to longtime firefighter, Deputy Chief Chris Byrne. Chris started at the Fire Department in 1983 when he was just 20 years old. In the past 33 years he’s seen Marco Island grow from a sleepy little town to a bonafide city. He’s been witness to the evolving emergency response technologies and has played a significant role in laying the foundation for the department we know today.

Chris grew up just two hours east of Marco Island in Miami. After graduating high school he moved to North Carolina for college, but ultimately decided it wasn’t right for him. He then transferred to the University of Miami, studying architecture. His involvement in the fire service came by chance. At the time Chris was working as an installer for a cable TV company. One day while installing cable in a house, the owner came home and began talking to Chris about his life plans. The owner happened to be a firefighter. He went on to explain to Chris that there was opportunity in the fire service. “I wasn’t really sure what I wanted to do,” 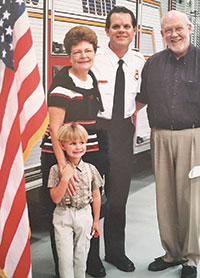 said Chris. “He thought it would interest me based on some of the things we were talking about. So I looked into it and went to fire school in West Palm Beach.”

At fire school something clicked for Chris. It seemed that for the first time in his life he knew what he wanted. At 20 years old he had found his passion. “Once I went to fire school I was hooked,” said Chris. “Everything about it, from fire school to EMT school, to paramedic school, I knew I had found what I wanted to do for the rest of my life.”

In the summer of 1983, just after his graduation, Chris and his family made there way to Marco Island for a vacation. Eager to get a start in his new career, Chris quickly contacted the fire department. “Ed Moulton at the time greeted me and showed me around. He told me that they were hiring four firefighters in August,” said Chris. “They mailed me the application and I mailed it back. I got called for an interview and was hired in October of 1983.” 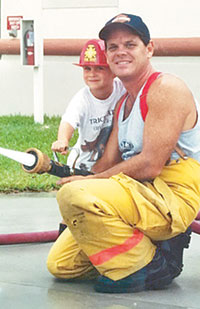 streets of Marco Island. But almost right away, Chris knew that Marco was the place for him. “They would come visit and there would be nothing to do past 9 o’clock at night,” said Chris with a laugh. “But I loved the beach, I love boating and I love the backwaters. For me it was perfect.”

When Chris first started he was assigned a truck to drive by himself. He was the only one on it. The weight of that responsibility quickly helped him grow as a firefighter, forcing him to work faster and more efficiently. “I think you grow pretty fast when you work that independently,” said Chris. And at the time it was all Marco needed. The fire station was still catering to the small population. But as the island began to flourish so did Chris. Slowly new technologies were being introduced to the department, allowing it to grow and strengthen. Firefighters were now expected to be more knowledgeable and more capable of handling even the most difficult of situations. At the time the department had no boat for water rescues, no rescue divers, no high angle rescues capabilities, and no hazardous material work. But this was slowly changing. “That’s what’s 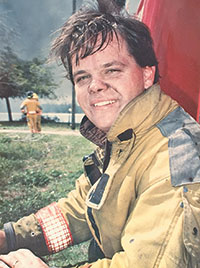 Submitted PhotosYoung and fearless: Chris Byrne after fighting a fire.

so challenging for firefighters today,” said Chris “It’s a constant challenge to keep up with the service that needs to be provided.”

Throughout the years Chris learned a lot about himself and life through his work. The profession, which often puts firefighters in stressful or life threatening situations, seemed to have a profound effect on his outlook. “I believe for me, you appreciate life more,” said Chris. “You don’t take it for granted.” Just two years on the job at age 22, Chris experienced his first encounter with death. In 1985 there was a large brush fire in Golden Gate and a firefighter Chris was working with was killed. “That was really quite a shock at a young age,” said Chris.

Marco too was changing, and fast. “Over the 33 years I got to experience the greatest amount of growth and development of the island and of the department,” said Chris. “The department had to grow and improve and professionalize itself. We went from a very sleepy, quiet island to a very active community, and then a city. I was able to be part of that generation of growth that I don’t think we’ll ever experience again.”

Among other items, Chris receives an axe – tradition among firefighters. Photos by Samantha Husted

to the firefighter he was. Firefighters, paramedics, EMTs, police officers, city employees and longtime friends and family got up to speak, all with the highest regard and respect. “It was absolutely overwhelming,” said Chris. “I was shocked and so grateful that people took time out that day to come and celebrate with me. It gave me an opportunity to thank a lot of people.”

Retired Division Chief Scott Schultz, a longtime friend, said in his emotional tribute that Chris was the epitome of what a firefighter should be. “Chris was always at the center of moving the fire department forwards regarding policy, technology and last by not least, leadership,” said Scott.

As for new firefighters just entering the profession, Chris says it is important to be committed to the job. “I think you absolutely need to have a passion for the job and for public service, for helping people,” said Chris. “You have got to be committed to it. The ones that struggle, if there are any, really get into it for all the wrong reasons. I would say if you’re looking at the career and you have the commitment, by all means pursue it. It’s a great career. But you’ve got to stay committed. You’ve got to continually work to improve yourself.”