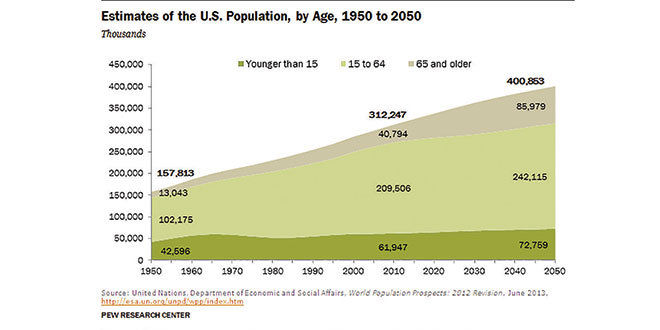 “Every new day begins with possibilities. It’s up to us to fill it with the things that move us toward progress and peace.” – Ronald Reagan

Question: How will the aging of baby-boomers affect economic growth?

Answer: Changes in the age of a large segment of our population will have significant impact on jobs, production output, productivity and the standard of living. Let’s identify the segment we’re talking about; baby boomers are those individuals born between 1946 and 1964 who are now 52 and 70 years old and they’re a powerful bunch.

According to the Population Research Bureau, by 2060 the number of Americans age 65 or over will double. Today, boomers represent 15% of the total country and by 2060 that will have grown to 24% of the total U.S. population. This will influence jobs, production and the standard
of living.

Between 1960 and 2000 our labor force growth rate averaged 1.8% annually. One reason for this high rate was the first release of birth control pills in 1960 allowing women to plan childbearing and make career decisions. Female labor force participation peaked in the late 1990s, and about the same time the first wave of boomers started to retire. These events caused labor force growth to drop to 0.60% per year between 2000 and 2015. The Bureau of Labor Statistics projects labor force growth of 0.5% per year over the next 10 years.

Lower labor force growth means lower real gross domestic product (GDP). Between 1960 and 2000, the inflation-adjusted measure of overall economic output, which is GDP, grew at an average of 3.6% per year. In contrast, between 2000 and 2015, real GDP growth fell to an average of 1.8%, or half as much as it was during the previous forty years.

The Federal Reserve is forecasting long-term GDP growth of 2.0% assuming output per worker growth of 1.5% per year. It’s obvious that faster productivity growth translates into greater employee compensation, higher corporate profits and an overall better standard of living. The problem is the low labor force growth rate. Much of this is likely transitional, but it is also part of a trend toward slower
global growth.

Unless there’s a dramatic increase in output per worker, or a sharp increase in immigration, the slower growth in labor input means lower GDP growth for the next several decades. Add to this a decrease in capital expenditure spending (CAPEX) and business investment, and our productivity growth could be much slower than anticipated.

The needs of an aging population and technology changes influence whattype of job growth we experience. Agriculture and manufacturing employment are expected to shrink due to decreased demand. Retail employment growth will also slow as we do more shopping online.

Professional and business services should also add more jobs. Healthcare, specifically elder care and social assistance, have increased demand which equals job creation and increased consumer spending. Technology will boost productivity growth, yet advancements in robotics and artificial intelligence will likely displace some workers. For instance, self-driving vehicles could replace truck drivers and robots could displace manufacturing workers. Based on past changes in technology, the economy is likely to be transformed over the next few decades creating new opportunities and jobs we can’t even imagine today. The challenge will be to create and fill those jobs while managing education
and displacement.

It’s Not Just US:
A Trend Toward Slower Global Growth

The U.S. economy isn’t alone in experiencing lower productivity growth as our population transitions. These are worldwide concerns. Japan’s population numbers are declining and they have little or no immigration. Emerging economies have been playing catch-up and should continue to grow, but their population dynamics suggest slower potential growth. China’s one-child policy, which was phased out in 2015, means fewer workers to support each retiree. How we deal with slower global growth over the next years will be challenging.

In the 1980s, President Reagan’s commission on Social Security predicted that retiring Baby Boomers would place too much pressure on Social Security and Medicare. Trust funds were created and funded by workers paying more into these programs than was being distributed. Theoretically, when the Boomers retired, the government would simply tap into these funds. The problem is that the government has borrowed against these trust funds.

The combination of slower population growth and the aging of baby boomers is a problem affecting the entire economy. Another consideration is whether companies are ready for the brain drain and loss of productivity when boomers retire.

Economic growth is driven by labor and productivity. With technological innovation and improved profitability, our economy may continue to expand. If boomers will represent 24% of U.S. population by 2060, it may be useful to look for trends and see where baby boomers are spending their retirement savings. Stay focused and plan accordingly.

Information contained in this report was received from sources believed to be reliable, but accuracy is not guaranteed. As federal and state tax rules are subject to frequent changes, you should consult with a qualified tax advisor prior to making any investment decision. There is no assurance that any investment strategy will be successful. The opinions expressed are those of the writer, but not necessarily those of Raymond James and Associates, and subject to change at any time.

“Certified Financial Planner Board of Standards Inc. owns the certification marks CFP®, CERTIFIED FINANCIAL PLANNERTM, CFP® (with plaque design) and CFP® (with flame design) in the U.S., which it awards to individuals who successfully complete CFP Board’s initial and ongoing certification requirements.”