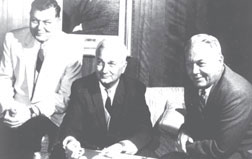 The Mackle Brothers who owned most of the Deltona Corporation. SUBMITTED PHOTOS

The one single document with the greatest impact on the growth and density of Marco Island would be, without a doubt, the “Deltona Settlement Agreement.” This document created much of the current developed and undeveloped “eastern” Marco Island, as well as much of Rookery Bay and also created a great deal of the “951 Corridor” south of U.S. 41. The Agreement was not your normal arm’s length negotiated “deal” but was, in fact, the end result of years of complex litigation between the Deltona Corporation, who were the developers of Marco Island and of Marco Shores, and a multitude of governmental groups including the U.S.A., the State of Florida including a number of its sub agencies – the Florida Dept of Environmental Protection (“DEP”), The Trustees of the Internal Improvement Trust Fund (which consists of the Governor and his Cabinet), South Florida Water Management District, as well as many environmental groups including the National and Florida Audubon Societies, the Environmental Defense Fund, Collier County Conservancy, etc. The Settlement Agreement immediately settled nine separate lawsuits, five of them with the DEP and one with the federal government, being an off-shoot of a case that had just been denied a hearing by the U.S. Supreme Court a few months earlier. It is not an exaggeration to say that this document, dated July 20, 1982, created the Marco Island we know today.

Recent newspaper articles report controversies that have historical roots in this now 30 year-old Agreement. For instance, a recent story reported that the DEP had filed suit against a number of property owners with boardwalks constructed to gain access to Barfield Bay – why was the State objecting? Because, the development rights to all of the lots abutting Barfield Bay that Deltona had owned were given up in the Settlement Agreement. The Agreement rezoned this strip of land as “Environmentally Sensitive.”

Additional stories appear about the dead mangrove areas near San Marco Road and the cost to restore them. A contributing cause: the Agreement allowed the development 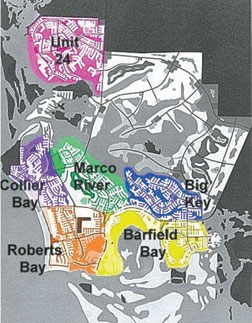 of the adjacent “John Steven Creek” (the location of condos of the same name, Stevens Landing), “Barfield Bay Multifamily Area” (now where Estuary and Vintage Bay Condos are) as well as “Horr’s Island” (Key Marco Development) to be constructed without having to meet the full requirements for surface water management.

But, there are more far reaching provisions of this Agreement. It carved out “specific developable areas” that were deemed high and “upland” enough to build upon. These include the now completed areas of: Goodland Marina (now called the Calusa Island Marina), Horr’s Island (The Key Marco development), the Barfield Bay single family area (streets behind the “Big Publix”), the Barfield Bay multi-family area (condos mentioned above) and a parcel of land known as “Isle of Capri” – at the corner of Capri Blvd and S.R. 951 (Collier Blvd) which is currently being developed by Collier County into a canoe and kayak park. All of these projects were possible because of this Agreement and, in fact, parts of each continue to be constrained by the Agreement; for instance, the approval to develop Horr’s Island into the Key Marco project permitted only a small portion of the center ridge of the Island to be developed, while the many mangrove and preserve areas were placed under the protection of The Conservancy of Southwest Florida. Recently this was in the news regarding the extent to which the vegetation could be trimmed without environmental approval.

Deltona amassed and owned 24,962 acres of land on or around Marco Island. However, by the date of the Settlement Agreement in July of 1982, they had been only able to develop and improve less than a fourth of it, only 5,518 acres, leaving 19,444 acres yet to be developed, almost 70% of which (13,500 acres) were classified as “wetlands.” Where are these thousands of undeveloped acres? Two large parcels, which Deltona had already totally presold, were the “Big Key” and the “Barfield Bay” areas located to the north and south of San Marco Road as one heads toward 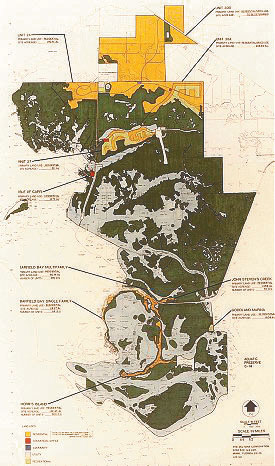 Map showing the extent of Deltona’s ownership in 1982 – to the south is Kice Island, to the north U.S. 41, and to the west is part of now Rookery Bay.

the Goodland Bridge – 5,889 planned residential units were never built here. Meanwhile, a third, and even larger tract, the controversial “Unit 24,” also known as “The Collier-Read Tract,” consisted of 3,564 acres, platted to contain 6,604 units and was located due west of SR 951 projecting directly into the middle of Rookery Bay (now a National Estuarine Research Preserve). In total Deltona planned 12,493 potential single family and condominium dwelling units in these three developments. Their presale of all of the lots located in the Big Key and Barfield Bay areas and over half of those in Unit 24, never to be completed, put a huge financial stress on the company to repay its customers. In addition, the large Kice Island project (which Deltona envisioned connecting via a bridge from Horr’s Island) located north of Cape Romano included 2 . miles of pristine gulf front beach, was never constructed and title to 4,032 acres was transferred to the State of Florida.

Meanwhile lands to the east of S.R. 951 and north of Marco were deemed less environmentally sensitive. This included Marco Shores where Deltona had constructed its airport, a country club and adjacent multi-family parcels. To the north of that was the huge parcel known as “Unit 30” – now incorporated into the current “Fiddler’s Creek” project. As a strategic move, Deltona acquired the properties that made up Unit 30 after 1976, when the Corps of Engineers announced their denial of the development of the Big Key and Barfield Bay permits. The rest of Deltona’s undeveloped 19,444 acres included hundreds of mangrove islands located in and around Addison Bay (to the east of the Jolley Bridge), and in the areas of MclIvaine Bay, and south of Horr’s Island, all of which were deemed environmentally sensitive.

In a stroke of a pen thousands and thousands of acres of land were designated for transfer to Rookery Bay, the DEP, or set aside with conservation easements never to be developed. In addition the Settlement Agreement cancelled virtually all of 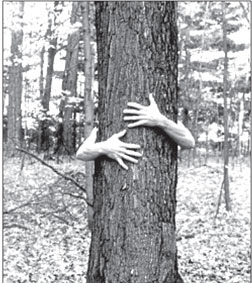 the existing permits and approvals. So what did Deltona obtain by signing it? Obviously the end to expensive litigation (which did not look promising as the U.S. Supreme Court had just refused to hear their case), but also immediate approval by all of the ten agencies who signed it for the completion of the “developable areas” and established an expedited procedure for any other approvals needed. Deltona was given 50 acres owned by the State near the Miami International Airport and the ability to quickly develop or sell off as “fully permitted projects”: Horr’s Island, John Stevens Creek area, Goodland Marina, the Barfield single family area and multi-family areas, and the Isles of Capri parcel. But what else did Deltona get? An enormous concession, and clearly the single largest impact on modern day Marco Island, they received the right to transfer their remaining vested density of 14,500 dwelling units (less the units which remained permitted to be constructed on Marco Island) north along the 951 corridor. So when you drive north and see the large high rises of Hammock Bay or the scope of the Fiddler’s Creek project, know that, but for this Agreement, some of the units you are seeing were once planned to be built on Marco Island.

The Deltona Corporation took the high ground, repaid all of its customers and refused to file bankruptcy. The company never fully recovered from these financial setbacks as well as from the repercussions of the litigation (despite this Settlement Agreement), and in 1986, Deltona was sold for its assets, primarily the water, sewer and other utilities it had retained in the various developments around the State, including those on Marco Island. This sale led to private ownership of Marco’s water and sewer franchises, resulting in a later purchase of them by the City of Marco Island, which in turn led to more controversy and litigation. Without a doubt, the events of today are impacted by the decisions of yesterday, and only those who take the time to analyze the history can fully understand it.