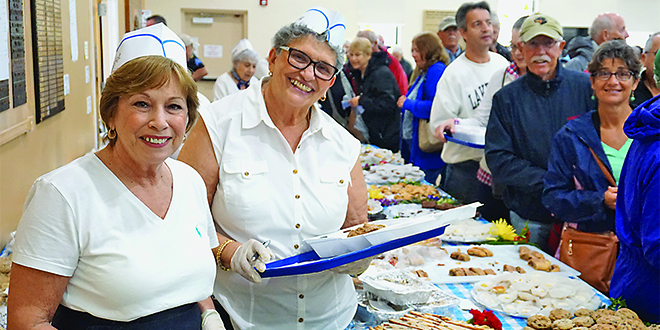 There is something that feels special about eating a good pastrami sandwich and a warm bowl of matzo ball soup. For some of us it makes us recall our childhoods, and our mother or grandmother’s cooking. For folks from New York or New Jersey, where Kosher delicatessens are commonplace, it feels like home. And still for others, without the culinary memories of good Jewish deli food, it offers a chance to try something different, out of their routine.

Recently the Jewish Congregation of Marco Island (JCMI) hosted their annual Deli Fest. Once again the event was a success, bringing out crowds of people hungry for a feast. The menu offered something for everyone: pastrami and corned beef sandwiches, matzo ball or beef barley soup, fresh baked challah, and homemade desserts like rugelach, mandlebrodt, strudel, cheesecake and more.

The morning was cold and rainy. The JCMI volunteers were sympathetic to their fellow Floridians, who are unused to 50-degree weather, and they opened the doors early. Rabbi Mark Gross served as a greeter, welcoming every visitor warmly with a smile.

…this year the volunteers showed up bright and early at 6:45 AM and prepared all 1,700 sandwiches, ready by the time the doors were opened. Sixty volunteers were enlisted to help.

Long tables were set up so people could enjoy their lunch at the JCMI. Just as many, if not more, came solely for take out. I watched people stock up, bringing home full boxes of goodies to eat later in the day, 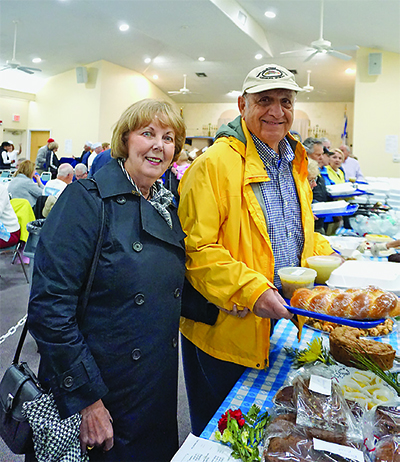 or in days to come.

Sandwiches came neatly wrapped in a box with mustard, coleslaw, dill pickle and potato chips. After the first bite you realize it is the real deal. The pastrami and corned beef were sourced directly from New York, and served on rye bread baked fresh and provided by Publix.

In addition to Publix, other sponsors were Winn Dixie, which provided all the supplies needed to make the traditional matzo ball and beef barley soups, and Affordable Landscaping, that generously donated the advertising this year.

Deli Fest event committee members include Joanne Blau, Estie and George Karpman, Carol Polinsky, Bernie Seidman, and Bert and Joan Thompson. We spoke to Estie, who said that following the event each year the organizers reflect on how they can make the event even better for the following year. One of the big changes they made was to the set up. The organizers streamlined the process so that the lines moved smoothly and efficiently around the room, which resulted in a reduced wait time. Estie also said that this year the volunteers showed up bright and early at 6:45 AM and prepared all 1,700 sandwiches, ready by the time the doors were opened. Sixty volunteers were enlisted to help.

The JCMI hosts many events that are open to the community, including Bingo every Monday (doors open at 5:30 PM), weekly Mah Jongg, duplicate bridge, a book club and more.

For more information about the JCMI, visit marcojcmi.com or call 239-642-0800. The JCMI is located at 991 Winterberry Drive, Marco Island.