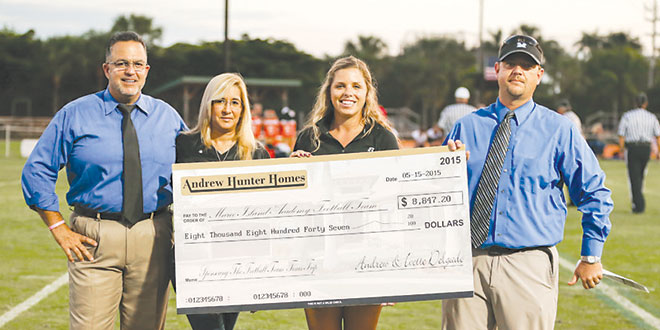 When Marco Island Academy High School was in its infancy Andy and Ivette Delgado joined in the commitment to make it a success.

Their most recent aid came with their donation of $8,847.20 to cover the cost for the football team and staff traveling to Texas for an outstanding football and bonding experience at the beginning of the season.

Jane Watt, school founder and board president, acknowledged the generous donation, adding that the Delgados mean much more to the school.

She talked with the Delgados when it was time for son Andrew to choose a high school four years ago.

“We are so thankful that they chose the academy,” she said. “When they committed it wasn’t just financial to help us succeed, but a commitment of time and talent.”

In the first year Delgado took on a leadership role as coach to the baseball team. In the second year he added football to his head-coaching list. He is now an assistant coach for both teams.

He was part of a group that started the Marco Island Eagles football teams in the Miami Xtreme League and led in organizing a young baseball program that advanced from Gulf Coast Little League to the Cal Ripken Baseball League.

“I’ve known many of the kids from their early start in sports and now many are seniors at the academy,” he said.

His son Andrew, a senior, is one of the products of dad’s sports. He has been a significant contributor to the football and baseball teams.

Ivette “stayed in the background.”

Andy credits her with having to do the pile of paperwork necessary for the Florida High School Association when it came to varsity sports. “Early on she was our accountant, handled all the [FHSA] paper work and coordinated player physicals,” Andy said. Add to that running a family and assisting in the family business.

Watt said, “Andy was an integral part of the football and baseball teams and really a close part of student life.

“Since early childhood, as young as 6 years old to 17 years old, I have been involved with the kids. At times I have felt like a parent and there are those that still call. Nothing has changed,” he said.

The Delgado’s donation for the football trip wasn’t unusual for them. They have been supportive in many aspects.

This will be the third year that a boy and girl each will receive a $1,000 award for being the top student athlete role model. The winners have been Mayra Ortega and Alex Excel, the first year and Krystal Gonzales and Irving Cerventes, the second.

“It gives student athletes a goal to be prestigious role models in sports and the classroom. The funds go to the college they attend, to its bookstore to help with expenses,” Andy said.

To that end the Delgados sponsored two tables at the annual Winged Foot Award dinner, which recognizes the top student athletes in Collier County. One table hosted underclassmen. “I wanted them to feel the experience,” he said.

A classroom was named in the family’s honor to recognize their efforts.

Delgado served on the Marco Island police force for seven years, and a realtor for 10 years. He has been building luxury homes on Marco for the past six years.

“I feel blessed, we have a great staff,” he said. One of his employees is Bob Maher, former building inspector for the City of Marco Island. “We provide a concierge of services,” Delgado said. “We want our client as part of the building experience.”

The Delgados will continue to be part of the academy experience.

Son Hunter, an eighth grader at Marco Island Charter Middle School, will be the next Delgado going to the academy. He plays tennis and baseball.

“Jane Watt was tenacious in getting the school up and running,” Delgado said. “I said in the beginning that I would support her, and we will continue to support her. The school and athletic program is definitely going in the right direction.”