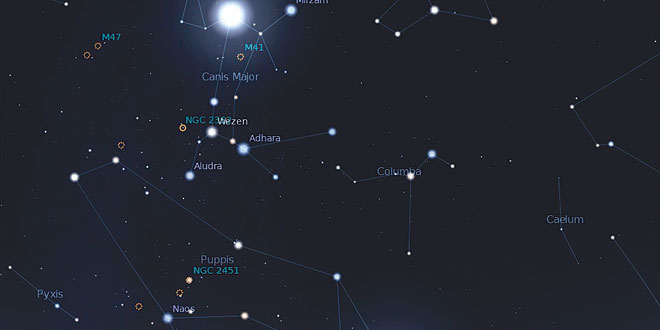 Nearly due south tonight burns the second brightest star in the sky – Canopus. This star can only be seen in southerly latitudes of less than 38 degrees and really only shines with its full brilliance in latitudes under 30 degrees; in Florida for example! Canopus is the brightest star in the constellation of Carina, the keel of the old ship constellation Argo Navis. In ancient mythology a man named Canopus was the navigator for Menelaus, the husband of the famous Helen.

Argo Navis, after dominating the southern sky for a couple of millennia, was broken up in the eighteenth century into three smaller constellations, Carina, the keel; Puppis the stern; and Vela, the sails. Argo Navis sat squarely in the southern Milky Way and was considered too unwieldy by astronomers who were busy cataloging the sky. If Argo Navis were still a constellation today, it would be the largest of them all.

All, or very nearly all of the old constellation will rise above the horizon on Marco – but not at the same time; the island is not quite far enough south for that. In a few 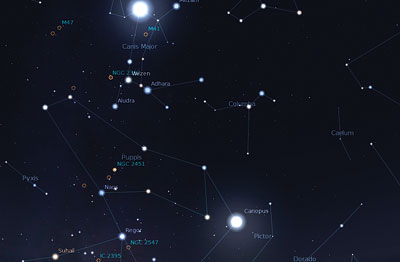 hours the stern will set before the bow completely rises. Two thousand years ago tonight the entire constellation was visible above the horizon on Marco. In the intervening millennia between now and then the ship has sunk southward several degrees. The stars themselves have not moved but the Earth has wobbled due to precession of the equinoxes.

For binocular users there are several bright star clusters in Puppis; particularly NGC 2451, which would certainly have earned an M number had Messier been far enough south to have seen it. There are still three Messier objects in Puppis but they are in its far northern regions (as the modern boundaries are drawn) and are much fainter.

In a month or so we may have a bright comet to look at in the west; I’ll keep an eye on it both literally and figuratively and let you know about its progress. Now would be an excellent time to invest in some binoculars if you don’t already own a pair!

Mr. Usher is President of the Everglades Astronomical Society which meets the second Tuesday each month at 7 PM in the Norris Center, Cambier Park, Naples