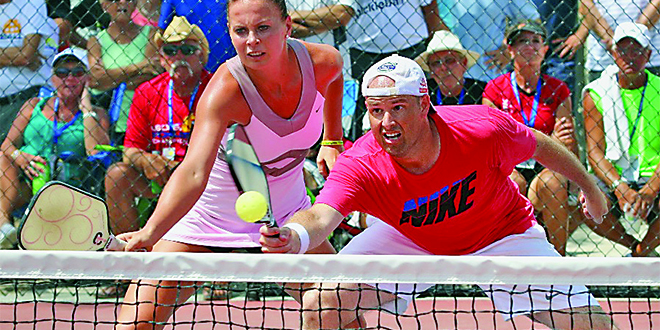 One of the most misunderstood aspects of the sport of pickleball, especially for beginners, is the utilization of the seven-foot, no volley zone, aka the kitchen.

I personally don’t like to refer to it as a “no volley zone,” for two reasons.

Number one, I am a “glass is half full” type of person. I like to look at things from a positive point of view, instead of a negative point of view. If I refer to the kitchen as a “no volley zone,” right off the bat I am thinking “NO,” which is negative. However, if I refer to the kitchen as an “I must let the ball bounce zone,” now I am thinking positive; not what I can’t do, but what I can and must do!

Number two, even though it is a no volley zone, remember, it is only a no volley zone if I step on the line or into the kitchen. Many beginning players misunderstand the fact that if I do not actually step into the zone, I am allowed to volley the ball! Along with that, many beginner level players think that a ball has to be placed in the kitchen to be a well-executed dink.

Advanced level players will frequently attempt to place the bounce of their dinks right at, or just behind their opponents’ feet. This placement of the dink will make most beginner, and even intermediate level players, take a step or two backwards. This now puts them in a position which makes it more difficult and challenging to execute a strategically effective shot, and it usually forces most players to either miss the shot entirely or pop the ball up, which allows the opponents an opportunity for a spike/volley put away.

However, more advanced level players, when faced with a dink that is going to bounce at or behind their feet, will actually reach into the kitchen and execute a volley dink. The purpose of utilizing such a shot is to prevent ourselves from popping the ball up, take time away from our opponents, and keep us in at least, a neutrally/offensive position at the kitchen.

While this type of volley is considered to be somewhat of an advanced level shot, the truth is, that with a little bit of knowledge and a lot of practice, it is a shot that can be conquered and executed by all players.

The first and most important necessity to become accomplished at this shot is utilization of proper grips.

Most beginner and even intermediate level players, use a tennis serve/volley type of grip, aka a “continental grip,” for all of their dinks, as well as for their serves. While this grip is a very comfortable and is an easy grip to use, it is very limiting. Actually, you sometimes need to make a change in your grip to what is called an “eastern backhand” grip. This grip change is determined on whether you are hitting a backhand, or a forehand volley, as well as whether you are attempting to place the shot either cross court, up the middle, or down the line.

These grips are a subject I covered in a prior column that appeared in the February 19, 2016 issue of Coastal Breeze News, titled “Get A Grip,” which can be found at www.coastalbreezenews.com.

In addition to the grips, there are two main differences in hitting a volley in tennis and hitting a volley dink in pickleball. First, in pickleball, because of the fact that we are contacting the ball so close to the net, we need to get the face of the paddle more underneath the ball at contact than we would in a tennis volley. Secondly, because the ball is plastic, it just does not have as much response or rebound off the paddle as a tennis ball does off the strings of a racquet.

Another difference, strategically speaking, is that in tennis I am usually trying to end the point with a volley. However, in pickleball, I am actually, for the most part, trying to use the volley dink to pull my opponent into the kitchen and hopefully make them pop the ball up, for an opportunity for me or my partner to have a spike put away.

The volley dink, in pickleball, strategically, needs to be viewed more like a serve and volleyer player in tennis would utilize an approach volley, to set up an eventual point-winning put away shot. Because of this fact, as pickleball players, we must always be prepared to hit another, or possibly several other volleys or dinks, in order to eventually set up an opportunity to win the point.

The execution and utilization of this shot is not a strategy we want to attempt to implement during competition until we comfortably conquer it with confidence in practice and drills.

I offer weekly pickleball drill clinics at the Racquet Center. These drill clinics create a regularly scheduled opportunity to practice and play with other players, who are committed to improving their skills and their level of play.

Wayne Clark is a certified professional tennis instructor with over 25 years experience coaching players on all levels of the game. Wayne is also qualified in pickleball instruction. He has been the head instructor at The Marco Island Racquet Center since 2001. The Racquet Center offers clinics, private and group lessons for both tennis and pickleball. Coach Wayne’s Island Kids Tennis juniors program runs year round and has classes for players from kindergarten through high school. Contact Coach Wayne by email at coachwayneclark@aol.com by phone or text at 239-450-6161.

A Question of BalanceDo Not Enter