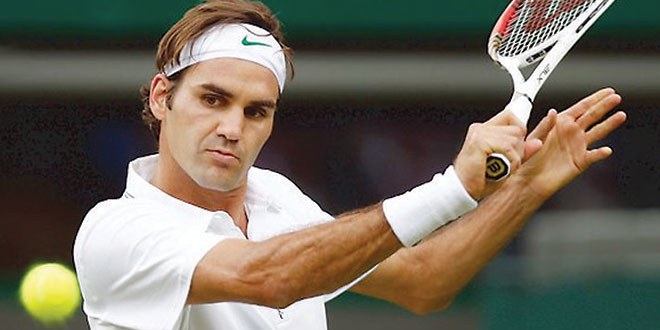 Taking my own advice from one of my previous articles, “Listen and Learn,” I was recently watching and listening to a post-match discussion earlier this year with Darren Cahill, former coach of Roger Federer. Cahill was commenting in regards to Federer, stating that while Roger prefers to offensively dominate in a match, he is so good at knowing when to play defense and when to play offense.

In the sport of football there are actual separate team units that go in for these specific purposes.

In basketball, time outs are called, and players are substituted and specifically inserted into the game for defense or offense.

However, in the sport of tennis, there is no coaching, no time outs and no time for specialty units that go in for a specific play or series of plays.

In tennis, whether you are playing singles or doubles, you are on your own and must make these decisions within seconds.

In tennis, every time you and your opponent strike the ball, the combinations of offense and defense are constantly changing, so 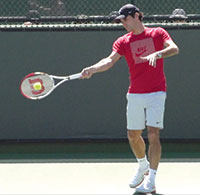 With that said, as I observe and instruct players on a 3.0 to 3.5 level. Players at this level of the game, for the most part, do not necessarily have any strong offensive weapons, like a big topspin forehand or a monster serve. Most of the time, the flight of the ball is actually directed with under spin, aka “slice,” which, on higher levels of the game, slicing a ball is usually associated with being in a defensive position in a rally.

However, even though the majority of shots at the 3.0 to 3.5 level are not hit with heavy topspin, proper understanding of how to combine a couple of shots together, which are strategically placed in our opponents side of the court, will win us a lot of easy points.

Slicing the ball keeps the bounce low and prevents the ball from getting up into a player’s strike zone. Therefore, players are forced to be hitting off balance, which will force them to either have to hit a weaker shot, which now puts us in offensive control of the point, or better yet, they will attempt to hit a low percentage offensive shot from a defensive position.

Steffi and Roger are

Steffi Graf, known for having one of the best slice backhands in tennis. SUBMITTED PHOTOS

both known for the quality and power of their forehand. However, both do (did) such a great job utilizing pinpoint precision-placed slice backhands to force their opponent to hit an out-of-position/off-balance shot. From this, they created the opportunity to finish off the point with an easy put away forehand.

This tactic can be accomplished on any level of the game simply by using a strategically well placed shot to force our opponent into an uncomfortable position, which will allow us to finish off the point with a simple high percentage shot.

This now becomes our biggest and best weapon! We don’t need a big topspin forehand or a killer serve.

One of my first coaches told me to win this game you simply need to be the last person to hit the ball over the net and inside the lines. Promote and allow your opponents the opportunity to miss by making them hit shots we are choosing, not shots that they are choosing. A sensible strategy with a high percentage advantage is our best strength.

Wayne Clark is a certified professional tennis instructor with over 23 years experience coaching players on all levels of the game. Wayne is also qualified in pickleball instruction. He has been the head instructor at The Marco Island Racquet Center since 2001. The Racquet Center offers clinics, private and group lessons for both tennis and pickleball. Coach Wayne’s Island Kids Tennis juniors program runs year round and has classes for players from kindergarten through high school. Contact Coach Wayne by email at WClark@cityofmarcoisland.com, by phone or text at 239-450-6161, or visit his website at marco-island-tennis.com