Dedication of the new span of the Jolley Bridge 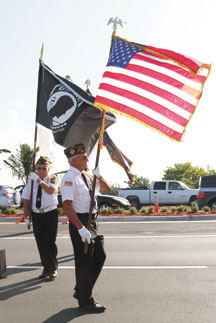 The new Judge S.S. Jolley Bridge was dedicated on November 19, 2011, a breezy, sunny morning on Marco Island. The beautiful new southbound span eases long time congestion on the original bridge which served traffic heading north and south. The older span has been repaired and reinforced to meet current safety standards and the entire bridge should serve the needs of our community for decades to come.

Steve Fickling, driver/engineer and Ray Ladurini, EMT/firefighter, both of the Marco Island Fire Department, were on hand in a motorized cart to provide assistance if needed. “We’re here in case anyone has a problem or if anyone has trouble walking, we can offer a ride,” commented Steve. Ray Ladurini pointed out, “we have a medical bag with us and can give assistance at once.”

City Council Chair, Jerry Gibson, called the ceremony to order with the Presentation of the Colors led by VFW Post Marco Island #6370 and 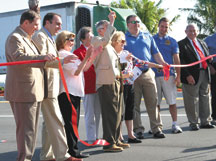 A celebratory moment for the ribbon cutters. PHOTOS BY VAL SIMON/COASTAL BREEZE NEWS

recitation of the Pledge of Allegiance.

Dr. William Trotter, member of Council and the Metropolitan Planning Organization praised the determined efforts of the late Michael Minozzi, who urged the MPO to recognize the need to fund a new bridge to Marco Island. Long after others believed funding was nearly impossible to obtain, Mike persevered in his efforts. When stimulus money became available, the bridge to Marco was truly shovel ready and all the levels of government cooperated in the final plans and construction of the new span. Dr. Trotter emphasized, “this bridge showcased how agencies and branches of government can work together for the good of the people.” 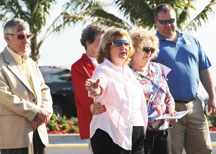 for whom the bridge is named and Lynne Minozzi, widow of Mike Minozzi.

Donna Fiala paid tribute to Mike Minozzi’s long service on the MPO and his unwavering support for the bridge. She credited city, county and state governments with “total cooperation” to erect the new span and provide beautiful  landscaping on both approaches to the bridge. Commissioner Fiala noted that changes were made to the design of the railings in order not to detract from the view from the bridge.

John Arceri spoke on behalf of the Minozzi family thanking the city for erecting a beautiful memorial plaque beside the bridge honoring Mike’s many years of dedication to a new bridge for Marco. The Minozzi family donated the monument on which the plaque is mounted. Father Tim Navin and Jerry Gibson escorted Lynne Minozzi to the site of the memorial which was blessed by Father Tim as it was unveiled by Lynne. He extended his blessing to all 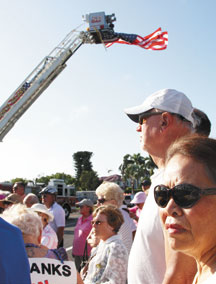 travelers who will drive across the bridge.

The ceremony concluded with a rendition of God Bless America by Marco’s own, Herb Savage, joined by all in the gathering.

Councilor Joe Batte and his wife, Anne, were present for the occasion. Joe remarked “we are celebrating a wonderful event for Marco Island, our new bridge. We’re very happy about it and grateful to have the bridge, a wonderful addition to our city.” Anne commented, “I wasn’t too sure I wanted a new bridge but after using it for a few months I think it is a wonderful asset to Marco.”

Father Tim Navin reinforced what the speakers had said about Mike Minozzi. “We are very blessed to have the bridge and especially blessed to have had Mike’s years of efforts on behalf of making this day happen. Although he is no longer with us, we remember him today and his good work for our safety.”