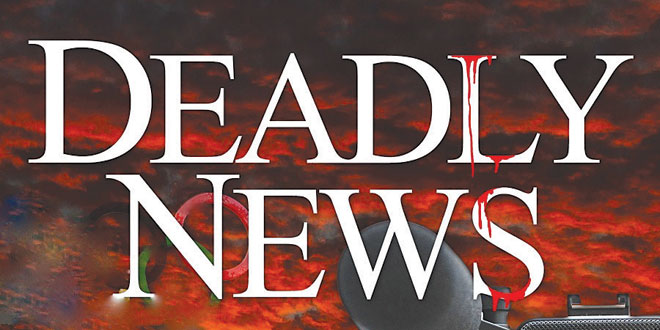 Atlanta is hosting the Olympics for the second time. One week before opening day, the planning committee is meeting at the Global News Service boardroom. Each of the 18 people present is assessing his or her readiness for the event. The mayor proudly shares his solution to a prickly problem: “We’ll urge our homeless friends who wander around downtown talking to themselves to walk in pairs. Visitors who come here during the Olympics will think they’re talking to each other.” The characters in the book suppressed their urge to laugh out loud, but I did not. It was the first of many laugh-out-loud moments I had with this thoroughly enjoyable book.

Between them, Don Farmer and Chris Curle have 99 years of news broadcast experience, local, national and international. In Deadly News, they have used their expertise to craft an entertaining murder mystery/thriller centered around the news business. It has the energy and pace of a Grisham or Coben thriller coupled with the satire of Herman Koch, Tim Dorsey or Carl Hiaasen. They manage a clever plot replete with multiple locales, many characters, and several murders.

The first murder occurs in Atlanta, virtually on live TV. It is grisly and I will not ruin it for any potential readers, but it is a quite unique way to go. We are taken into the inner world of broadcast news that most of us know little to nothing about – the producers, technicians, news directors, and owners. They are as colorful a cast of characters as the reporters. I doubt I will ever forget the producer, Rita! We learn about the process of how stories get on the air, how much time is allotted them, and which reporters and producers are assigned to the stories by the news directors. Reporters rambling on, in love with the sound of their own voices and seemingly oblivious to the topic at hand or their news director’s instructions. All this is presented with 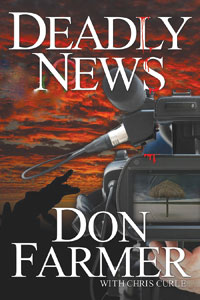 Integral to the story are the relationships of the principal characters that drive the plot along. The authors enrich these characters by sketching their life stories, sharing pivotal life experiences with the reader. The Amerasian twin females choose, as high schoolers, to take their Korean mother’s last name because they don’t look like a McIntosh. It is the last thing they do with one mind, as their vastly different personalities choose divergent paths into adulthood. Ian Phelps is a British media magnate and head of a drug ring who’s driving purpose in life is to destroy the BBC and to take over Global News Service (GNS) in order to demolish its owner Brenda Forrest. Ian is in hate with the world, it seems. Brenda Forrest is the powerful founder/CEO of GNS. It is her fiancé who is the victim of the initial grisly murder in Atlanta. But she is still in love with her first husband who was killed in an auto accident (?) many years previously. Jimmy Hagan is the Atlanta police detective covering the case. He is in a long-term secret relationship with Cassie Page, female reporter from NewsBlitz3 assigned to the story, and feeds her tips on the case.

From the first victim in Atlanta to the final gory death of one character in the mangroves off Marco Island (also caught on camera), Deadly News delivers. It is a thriller with a biting wit, characters to love, hate, or laugh at, and a continuously evolving plot, riveting the reader to the page. It is an added attraction that the locales are places familiar to many of us – most of the story takes place in Atlanta and Marco Island, with some action in London and Miami. Deadly News is a satisfying way to spend a rainy Florida summer afternoon, or any afternoon for that matter.

The print version of the novel comes out August 23, but the e-file is available now. To learn more about Marco residents, Don Farmer and Chris Curle, and Deadly News, check out amazon.com or Google the book’s title.