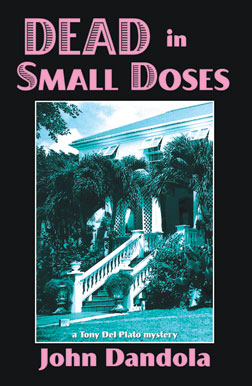 Each year, author-screenwriter-playwright John Dandola makes several trips to Marco Island, spending in total at least two months here. He not only relaxes but he finds the quiet, easy atmosphere conducive to writing. His newest mystery novel, Dead in Small Doses, is one of his 1940’s Hollywood series which will surely generate reminiscences among readers.

The author’s Dead series got its start due to the late Orson Welles. Just out of college, Dandola was asked to tag along with a friend who was doing a radio interview with Welles. Dandola’s reason for being there was that he not only had a film degree but he was a film afficionado who could hopefully keep things on track and stop the radio interviewer (an unabashed Welles fan) from making a fool of himself. The radio interviewer still succeeded in making a fool of himself so Welles shifted the conversation and became intrigued by Dandola’s roots in that his maternal grandfather had worked as a personal messenger boy to Thomas Edison. Welles urged him to somehow explore that connection creatively.

Years later, during a screenwriters’ strike, Dandola did just that in writing Dead at the Box Office, a mystery novel set against the backdrop of the actual 1940 Edison, the Man World Premiere which took place in his hometown of West Orange, New Jersey, where Edison lived and worked for the last fifty years of his life.

Dandola’s protagonist is the local barber (with a very dark past) who is teamed with an M.G.M. publicity girl to solve a series of murders which threaten to prevent the premiere from even taking place. The barber is based upon and named for his grandfather. But how did he come upon using a publicity girl as his female lead?

The author’s answer is as practical as it is inspired: “Those glorious stone-litho movie posters were as much a part of old movies as the movies themselves. The publicity and its fabrication have always fascinated me. It just seemed that a publicity girl would be the best foil and because she would be in on all the details and all the gimmicks, it would give a glimpse behind that touch of absurdity which coats everything Hollywood. And after the first novel, it’s been a creative challenge to invent plausible reasons for M.G.M. to mingle with Broadway and then with Paramount Pictures.”

Thus far, the two characters have worked their way through three mystery novels all with a Hollywood-outside-of- Hollywood hook. The third novel, Dead by All Appearances, introduced Paramount actress Marjorie Reynolds into the murder mix as she does a remote radio broadcast during a War Bond Tour connected with her breakout role in Holiday Inn.

In the newest novel, Dead in Small Doses, Miss Reynolds supplants the M.G.M. publicity girl as the female sidekick.

“When writing a series, continuity is everything so my publicity girl is 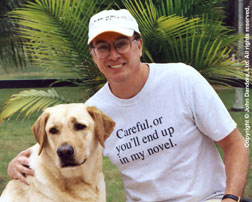 in the background of this one,” Dandola said. “The dynamics between characters, just like real people, change over the years. Enter Marjorie Reynolds. From everything I’ve learned about her through research and interviews, the late Miss Reynolds wasn’t just pretty and charming on-screen; she seems to have been a breath of fresh air off-screen. I thoroughly enjoy writing about her. She has become absolutely real on every page she occupies and she just clicked with the barber character. What’s more, the trajectory of her career can easily be understood by anyone in the outside world who has suffered from indifferent bosses and bureaucratic mindsets. That is a tremendously humanizing element in her appeal—even beyond her 1940’s movie star looks.”

In the spring of 1943, through his Edison family connections, Tony Del Plato gets a surprising assignment when Paramount Pictures decides to make one of its Popular Science movie shorts about inventor John Hays Hammond, Jr. (a real-life Edison protégé). Filming will take place not only at Hammond’s grandiose castle-home in Gloucester, Massachusetts, but also aboard his yacht on a trip to the Caribbean. Tony’s job: bodyguard to actress Marjorie Reynolds, who suggested the movie and will be featured in it.

Nearly six months since they last saw one another during a radio broadcast, that also involved Hammond, Tony and Marjorie find that their chemistry is undiminished. During their trek, Tony reveals some of his mysterious background in a trio of stories about his tutoring by Thomas Edison, his solving of an actual New Jersey cold case from the 1880’s, and his association with notorious New Jersey gangster Abner “Longy” Zwillman. But those stories aside, Tony and Marjorie also manage to become embroiled in a Caribbean murder.

So how have his extended visits to Marco Island contributed to all of this?

“I live in the Northeast where about two-thirds of this novel’s action takes place but when the storyline moved to the Caribbean—where I’ve spent a lot of time and have many personal photographs which were used as reference—I still wanted and needed to feel the ambience of tropical weather, sun, sea, and air since it’s the everyday nuances which make fictional settings ring true. Marco Island supplied that ambience very nicely. It’s why I love it here.”

Dead in Small Doses is published by Compass Point Mysteries (435 pages, $16.95) and will be available online exclusively at www.Biblio.com.

And yes, with the Edison connection so ever-present in the novels, a future story will take place in Fort Myers just as soon as Dandola relocates to Marco Island permanently which he hopes will be within the next year. One of his previous mystery novels, A Beckoning Wind, was based on Marco and he hopes to continue using the island as a locale for more of his fiction.