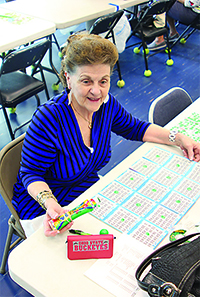 For dedicated players, Bingo is a special blend of convivial fun with the attraction of winning some loot. And for newcomers, it could be a revelation. A game changer, you might say.

And, while plenty of perks come with being a member of the Greater Marco Family YMCA, many people may not be aware that non-member programs are plentiful too.

Over at the Y’s Youth Development Center, anybody over 18 is welcome to show up for Bingo sessions, which are daytime affairs by design, and staged on Tuesdays. Doors open at noon, bonus numbers are posted at 12:15, and the first game begins at 1 PM.

Prizes vary according to the number of people playing; thus prizes for those at the opening session ranged between $20 and $40. As more people fill up the rows of tables, they rise up to $50, the maximum amount permissible according to State law, except for final (jackpot) games which can reach $125 if more than 100 people are playing.

So, if you’re sold on the daytime format and the airy and clean venue, just arrive with enough money to buy the playing necessities, $22 for a large package containing three packs of 15 sheets, three bonanza folded sheets and three raffle tickets.

A $14 option secures two packs of 15 sheets, a bonanza folded sheet and two raffle tickets, while $5 buys a pack of 15 sheets and a raffle ticket as an extra bonus for buying the $22 package.

Rules are provided prior to the start of sessions.