Hot on the heels of the successful opening of Marco Prime last summer, the boys at DaVinci’s have another restaurant in the works. This one takes them back to their Italian roots and across Alligator Alley to the Town Center at Boca Raton — Simon Property Group LP’s high-end retail crown jewel in South Florida. It covers 1.75 million square feet and welcomes 11 million visitors annually.

“We were in the right place at the right time with the right people,” Owner Luigi Carvelli notes when describing this surprising development. “You can’t just get space there. You’re chances are very low.”

Dubbed DaVinci’s of Boca, the new restaurant will amp up the Marco Island location’s traditional, high-quality Italian menu and causal, family feel. Carvelli says it will be “an upscale Italian restaurant,” and will be one of the few “mom-and-pop” restaurants in the Town Center. DaVinci’s of Boca is scheduled to open in June.

According to Carvelli, this opportunity of a lifetime came after representatives from Simon visited Marco Prime and DaVinci’s while exploring Marco Island. “They said they were looking for an Italian restaurant to come into the (Boca Raton) location,” he explains. “They

loved what they saw, and they were impressed with our operation.”

Ellen Korelitz, director of marketing for Town Center at Boca Raton, says Simon was on the lookout “to add a new, high-quality Italian dining option to (Town Center’s) distinctive and upscale tenant mix,” and company officials had a specific recipe in mind. The restaurant had to serve “exceptional and authentic Italian cuisine with outstanding service,” and it had to be a non-chain restaurant.

“We found DaVinci’s on Marco Island, which met all of these needs,” Korelitz notes. “The restaurant has a reputation for catering to discerning patrons like those who shop and dine at Town Center at Boca Raton, so it’s a natural fit, and we’re glad to have them.”

Despite the high expectations, Carvelli and his business partners — his brothers, Francesco and Sal, and his cousins, Francesco and Adamo Serravalle — feel they are up to the challenge. In fact, they are used to it and welcome it. Carvelli believes the group’s recent success with Marco Prime provides them with a road map to hitting the mark with DaVinci’s of Boca. 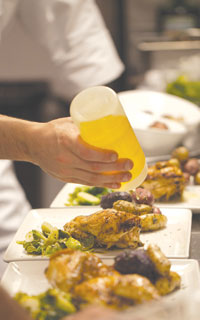 On the line at Marco Prime. PHOTO SUBMITTED BY JULIA OPRAVINA

ambiance are scarce on Marco Island. By all accounts, though, restaurant visitors really seem to like them. Just take a look at the 111 reviews on TripAdvisor.com.

The reasons are simple, says Carvelli. First, the ownership is consistent and has experience in running a successful restaurant. DaVinci’s is entering its 19th year on Marco. Second, the ownership is composed of family members who all have their own special niche in the business. Carvelli focuses on the business and daily restaurant operations. Brothers Francesco and Sal run the kitchens. Cousin Adamo Serravalle handles the wine, and cousin Francesco Serravalle manages the bars at both restaurants.

Third and final, location, location, location. The bustling Marco Walk Plaza locations for Marco Prime and DaVinci’s have a strong track record of drawing 1,500 patrons on any given night, and both restaurants employ a combined 120 people. For DaVinci’s of Boca, a restauranteur cannot get a much better location than Town Center at Boca Raton.

When the new restaurant opens, says Carvelli, all of this will help make DaVinci’s of Boca a success. “One of us will be there at any given time,” he adds. “We are hands on people, and we do our own work.”4