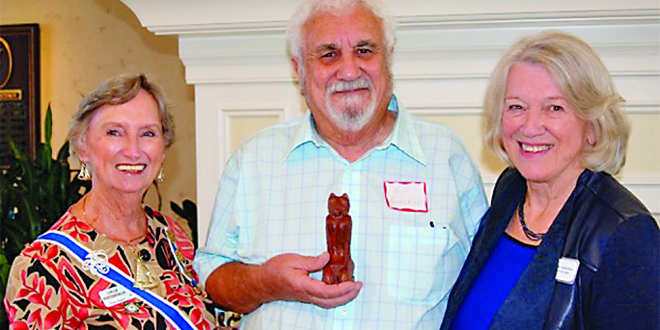 Photo by Chris Curle:Virginia Poffenberger (left) with Bill and Betsy Perdichizzi. Bill holds a replica of the Key Marco Cat.

The State Regent for the Daughters of the American Revolution (DAR) was a special guest at last month’s meeting of Marco’s DAR at Hideaway Beach Club. Virginia Poffenberger described one of the two schools the DAR established in remote mountain areas to give children an education and in many cases food, a bed and safety.

Ms. Poffenberger outlined the critical services provided since 1903 by the Tamassee DAR School in impoverished Appalachian South Carolina. “The school serves not only the children but also their families, which may suffer from no work or access to education,” she said.

Some of the children speak for themselves on the school’s website (www.tdarschool.org):

“Tamassee has given me food, shelter and clothes. Before I came to Tamassee, I barely had any of this.” ~ Student, age 12

“Every night I thank God for blessing me and my brother with Tamassee DAR.” ~ Student, age 14

“Tamassee has given me a chance to make something of myself.” ~ Student, age 14

That presentation was followed by Marco DAR member Betsy Perdichizzi and her husband, Bill, who described the beginning of the Marco Island Historical Society in 1994 and its efforts to build the Historical Museum, which opened officially in 2011. In 2015, it received the Museum Excellence Award from the Florida Association of Museums for its permanent exhibit, “Paradise Found: 6,000 Years of People on Marco Island.”

The Perdichizzis led the women on a tour of the museum and a driving tour of the island’s historical landmarks.

To learn more about Marco Island’s history, visit www.themihs.com. For more information on the Marco Island Chapter of the DAR, contact Karen Lombardi at 239-394-0028.