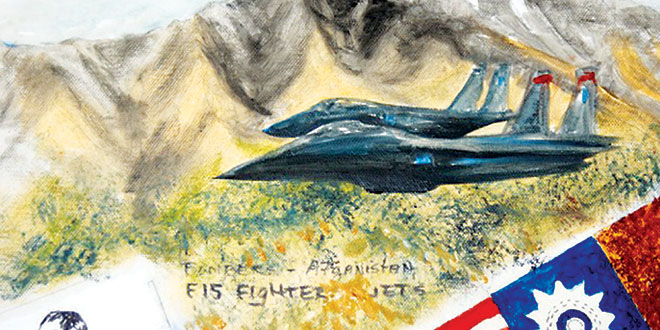 “From Sea to Shining Sea” by Malenda Trick’s depicts all U.S. war efforts, including fighter jets in Afghanistan.

Art depicting patriotism was the centerpiece of the November 19th meeting of the Marco chapter of the Daughters of the American Revolution (DAR) at the Hideaway Beach Club.

Local artist, Malenda Trick, described the inspiration for her 18-foot long “From Sea to Shining Sea” patriotic mural. One side represents America at war. The other side depicts Florida’s war efforts.

“I’ve tried to include all the forces in all our wars, including the home forces, men and women, civilians,” she said. “I didn’t want to leave anyone out.”

Malenda said painting the mural was a history lesson 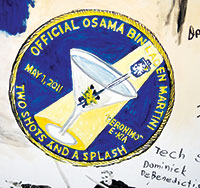 for her. “I had no idea there were more than 120 bases in Florida in WWII. Because it basically was swampland, the military could build an airbase almost anywhere. Naples was used immediately. And Miami. Even the British Royal Air Force was here, in Apalachicola.”

“It was almost impossible to get Florida citrus fruit here during WWII because the troops needed it. It was delivered to them by what they called ‘citrus bomber fleets.’”

The DAR has a prominent place on Malenda’s mural with Paul Revere’s midnight ride, and small portraits of George Washington, John Adams and Thomas Jefferson.

“I hope islanders will come see the mural through November in the breezeway at the Shops of Olde Marco,” Malenda told the DAR members. 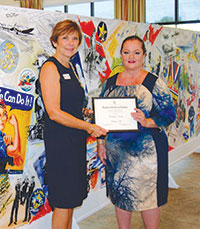 “Anyone can contact me to get their veterans name put on it. It’s $25 and the money goes to the Honor Flights taking WWII veterans to the war memorial in Washington DC.”

Malenda Trick’s artwork is displayed in buildings and homes around the world. She is known for her rich oil paintings, but she also creates murals, caricatures, portraitures, quilts, ceramic designs and home décor products. To learn more about Malenda Trick and her art, visit www.malendatrick.com or her studio at the Shops of Olde Marco. Phone: 239-394-2787.

The Marco Island Chapter of the DAR holds its monthly luncheon meetings at 10:30 AM on the third Thursday of each month. Potential members and visitors from other chapters are welcome. For more information, please contact call Karen Lombardi at 239-394-0028.