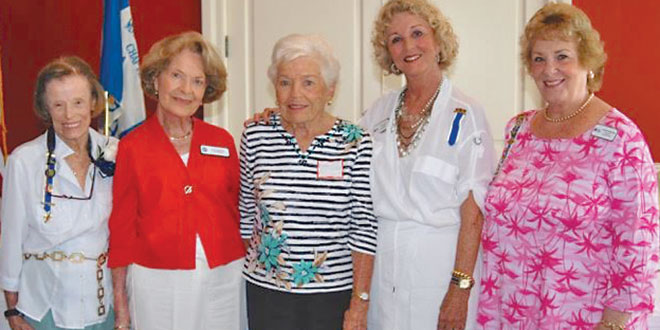 The final meeting of the season for Marco Island’s Daughters of the American Revolution included a look back at the leadership of the chapter since its establishment in 1976 and a look forward with the honoring of outstanding local students.

Each year, Marco’s DAR presents a bronze medal to a JROTC cadet at Lely High School The cadet must rank in the upper 25% of the class in both JROTC and academic subjects, must have demonstrated qualities of dependability, good character, adherence to military discipline, leadership ability and an understanding of the importance of ROTC training. This year, Cadet Kalani Siler of Marco Island received the medal and certificate from the DAR National Defense Committee. Kalani is interested in occupational therapy and sports medicine.

Marco Island Academy senior Meagan Reisinger received a certificate award for outstanding academic scholarship. She has higher than a 5.0 grade point average, on a 4.0 scale. She is in the National Honor Society, on the golf team, a cheerleader and homecoming queen. Meagan is interested in biology and would like to be a neurologist. She read her essay on patriotism to the group.

The DAR and the National Italian American Foundation awarded Marco Island Academy sophomore Chelsea Casabona a certificate for her Christopher Columbus essay comparing the explorations by sea and by air of Columbus and aviator Charles Lindberg, about 435 years apart. In 1492, Columbus landed in the Bahamas

and is credited with jumpstarting European development and conquest in the Americas. In 1927, Lindberg made history with his solo, non-stop flight across the Atlantic Ocean from Long Island to Paris.

The members ended the meeting with a special nod to some of the former leaders of the chapter since its founding 40 years ago in 1976. Ribbons were presented to past regents Joanne Moore, Kay Ziegler, Carolyn Brown, Judy Kenny and Barbara Messere.

Nationwide, and where Americans serve abroad, the DAR supports the U.S. military members and veterans with more than 200,000 hours of volunteer time each year at VA hospitals and other facilities. Its members donate care packages, phone cards and other needed personal items to America’s service personnel abroad. The group participates in naturalization ceremonies and recognizes outstanding veterans and ROTC/JROTC cadets. The DAR supports Honor Flights that have escorted WWII veterans to the WWII War Memorial since its dedication in Washington, D.C. in 2004.

DAR has 180,000 members in 3,000 chapters worldwide. Members are women 18 years or older, regardless of race, religion or ethnic background, who can prove lineal descent from a patriot in the American Revolution.