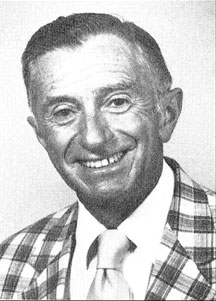 Jerry in his earlier years

For as long as anyone in the Rotary Club can remember, Gerry Gerolamo has been by far the club’s best dressed member. A few years ago, for an interview, Gerry counted and found he had 55 suits plus 40 sport coats in addition to enough bow ties to never be seen in the same one twice – and for very good reason. At the zenith of his career, Gerry owned two clothing stores in Lynn, Massachusetts, a suburb of Boston, and employed 32 people. How he accumulated so many bow ties is an accident of the fashion industry that will be explained later.

At the turn of the 20th century, Gerry’s dad, Constantino Gerolamo was a young vendor hawking newspapers in a piazza in Rome. He was selling papers for Mussolini, the later dictator of Italy. Constantino wanted to better himself so in 1903 he immigrated to the United States through Ellis Island. In 1910, he married Gerry’s mother Maria and on February 19, 1915, Gerry was born.

Gerry had two brothers, Wilson and Walter and one sister, Evelyn. Supersized ambition, hard work and with a creative mind, Constantino eventually became a most successful clothing designer in 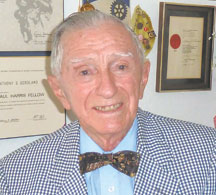 a time (the great depression) when most fathers had a difficult time placing food on the table.

He purchased a Victorian mansion in Lynn and owned one of only two Nash limousines in Lynn. The undertaker owned the other one and when there was a large funeral the undertaker borrowed Constantino’s Limo. While most depression era children had to learn to do without, Gerry, his two brothers and sister were fortunate to grow up not wanting for most material things.

After graduating from Lynn Classical High School, Gerry attended Boston University. In 1940 Gerry married Eleanor. They had one son, Donald and four grandchildren.

During World War II he worked for General Electric as an engineer supervising the manufacture of gyroscopes. Since his industry was designated a critical business in the war effort, he was not called to serve in the military.

Gerry inherited his father’s drive for success and flair for fashion. His first business venture was a dry cleaning store. He expanded to include seasonal fur storage and then one day he was offered a really good deal on one hundred pairs of men’s slacks. He bought them and offered them for sale in the dry cleaning store. People stood in line to purchase them. He expanded to add a full line of men’s clothing and later Gerry started a second clothing store offering the latest designs in both men’s and ladies fashions.

The business grew and flourished. In the 1960’s, there was a sudden change in ladies fashion. Ankle length dresses were no longer in vogue. The hemline had moved up to mid-calf. Gerry was stuck with a 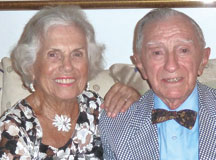 multitude of “old fashioned” dresses. The clever entrepreneur that he is, he turned this stale inventory into a windfall. He simply had his employees raise the hemline on each of the dresses and took the cut off pieces to manufacture bow ties with fabrics of many colors and designs. He still is wearing many of these excellent ties.

Gerry was a most active volunteer leader in his community and served on many boards including the Five Cent Savings Bank of Lynn, his local hospital, a community college, the Exchange Club and the Boys Club. He was President of the Lynn Chamber of Commerce and the Lynn Rotary Club. He received most satisfaction in working with a Boys Club that was about to fold. Under his leadership and fund raising ability, programs were expanded and many more youth were served raising The Boys Club to become one of his proudest achievements.

Gerry and his wife Eleanor moved to Marco Island in 1979. In 2001, after 61 years of marriage; Eleanor died of Alzheimer’s disease. Until recently Gerry walked along the beach six miles every day and feels that walking has been one of the primary contributing factors to his long and productive life. Possibly more important to his longevity is his passion for life. “Nothing! Nothing is worth more than this day,” is his motto.

Gerry met Rachel Klein one evening while eating at a local restaurant. He spoke to her on the way out. Later that week he ate again at that same restaurant and Rachel was there again also. Since those two chance meetings, he and Rachel have rarely been seen apart.