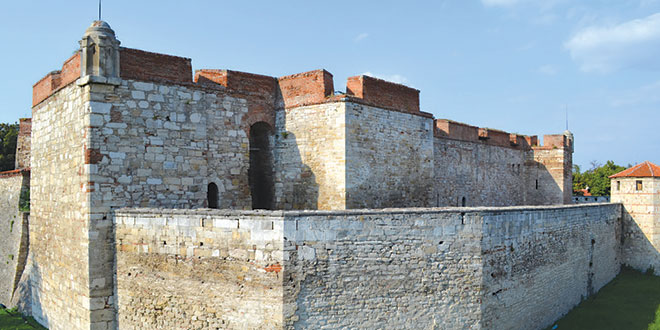 Castle Baba Vida bears the name of the 10th century princess who built it. PHOTOS BY CARL AND JOAN KELLY

This is our 50th anniversary cruise. The river? Danube. Where else do you go to celebrate 50 years? Our ship: The River Aria. We cruise east. Romania on the right, Bulgaria left, ahead the cities of Ruse (ROO-ze) and Vidin (vee-DEEN).

The Danube here is quiet but not lazy, beautiful but not romantic. Not yet. Tomorrow maybe. Today it is farmland, farm people, small cities, city people and castles.

Ah, we love castles. Love to prowl around and through them. Imagine them on feast days, stuffed with people, the people stuffed with food, swimming in drink, singing, dancing, loving. Now there’s romance. But romance was not the reason for building castles. Defense was.

Enter Baba Vida, a 10th century Bulgarian princess who built a castle at Vidin on the Danube, a fortress. We walked from our ship to the castle named Baba Vida, which means Grandma Vida. The Bulgarians have loved her for 1,000 years, and consider her the Mother of Bulgaria.

The double walled, dry moated castle has a reputation for its defenses, so we tried to see them as an invader. The only entrance through the double walls leads to a small, unevenly cobblestoned courtyard that slants decidedly upward to the castle door. Footing is uncertain while above on three sides are the battlements where archers fire arrows and other defenders pour cauldrons of hot oil onto us. Not good for invaders.

So, we fight our way to the door, batter it down, and enter a very dark passage that takes a 90 degree left turn just beyond the door. Then, it goes sharply up again over more uneven cobblestones. Finally, if we scrabble to the top of this treacherous climb, sprained ankled, fatigued and oil-burned, we can fight hand-to-hand with Grandma Vida’s waiting army.

I think I’ll pass on this medieval invasion.

We also enjoy walking in the towns and cities, meeting and talking with 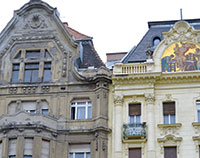 Two buildings, one unrestored from past wars, the other fully restored, side by side.

the people, noting how they live, trying to learn how they think. In what ways are they like us? How different? Carl also likes to learn some of the local language. Joan does not. Usually it doesn’t matter. English is a lingua franca.

So, we set off on our walking tours.

Passing through an arched portal in the castle’s outer wall, we walk onto the rocky beach to the riverbank. I stoop down to touch the Danube River water. That’s my thing. Men fish from the beach here every day. So would I if I had a pole.

Walking the small streets of Vidin with a local guide, we find a synagogue that was bombed in WWII. The walls remained standing, so the people left it as a kind of monument. We make our monuments as new art constructions. Preserving the old speaks more loudly and poignantly, I think.

The Osman Pasvavtoglu Mosque displays a heart at the top of the minaret, not a crescent moon. The imam speaks of the universal brotherhood of mankind. He and the bishop of the Orthodox church across the street work together to make that a reality in Vidin. We are impressed.

Vidin is a small town. We walked in cities also, noting that the marks of recent wars remain on many buildings. Bullet holes in the walls. But, as they are able, the owners restore these battered buildings. They restore them, not replace them. And they do have some marvelous old buildings.

Also, in the cities, as in our cities, a parking place is hard to find. In Bucharest they mark off spaces for cars to park on the sidewalks.

There seems to be a willingness to work with what is and try to make it better, rather than to discard the old simply because it is old.

Back at the dock we board the River Aria. We cruise upstream, east toward the Iron Gates and Serbia beyond.