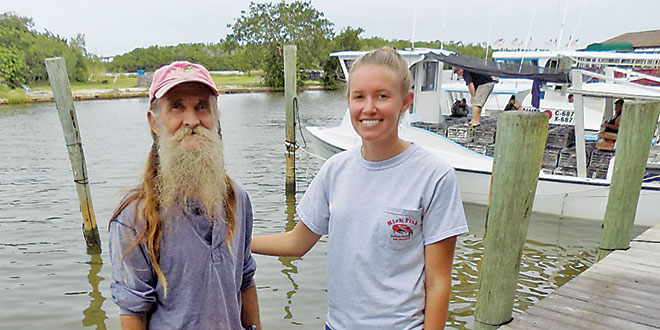 On October 6th, thanks to a big-hearted county judge and her compassionate bailiff, Danny Mootispaw had one of the best days of his life (see Goodland Life in this edition). On October 7th, he awoke to find that his 7-foot dinghy, used for trips to the mainland, had blown away from its moorings by gusts from Hurricane Matthew. Danny had built that skiff himself. Now he was left with no way to get to shore or to look for his dinghy. With no phone he had no way to report it missing or to ask for help. He depends on wild coconuts, mangos, and other tropical fruits to supplement his diet of catfish. He tried swimming and then used a small leaky canoe he kept on board. The swimming almost killed him and the canoe proved too hazardous.

On October 10th, Danny showed up at my front door and was ushered into my office. We often talk there. I 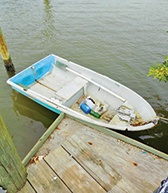 Danny’s skiff tied to the dock.

have known him for the better part of a year and he has never asked for help, not once. He is the poster boy for stoicism. But after some idle banter, he told me about his lost dinghy. “It was my fault,” he said. “I didn’t tie it securely enough. It was probably carried away by the tide and swept out to sea or into one of the [10,000] islands.” Once again, fate had conspired against him. I could see that he was upset. “Well Danny, just watch this,” I said. He looked on as I activated the Goodland “grapevine” and with a few clicks, sent out about 100 emails with a description of the dinghy. It is something we use in Goodland for announcements and for situations where our neighbors need help. About 15 minutes after Danny left my house, I received a reply from Doug Black suggesting that I look over at Kirk’s Seafood on Papaya St. Other

Danny in his skiff headed home.

I couldn’t find Danny so I walked over to Kirk’s. There Kelly Kirk, co-owner and operator of Kirk’s Seafood, led me to Danny’s little skiff, tied up safely at the end of the fish dock. On October 7th, three days prior, Daniel Doxsee of the Miss Chloe, a stone crabber, saw the dinghy astern of his boat. “It was wedged under the dock and was in danger of sinking as the tide rose,” said Kelly. “We managed to get it out and tied it up in a safe place.” Kelly took a picture of the boat and posted it on the Goodland Buddies Facebook page. “I got quite a few likes [on the posting],” she said. Doug Black saw Kelly’s posting and called me. The next day, Danny retrieved his boat and rowed it home. Thanks to Asiel Rodriguez, our popular postal clerk, I am able to leave messages for Danny at the post office. That’s kind of how things work in Goodland.