Danny Mootispaw’s Life Afloat: How Does He Do It? 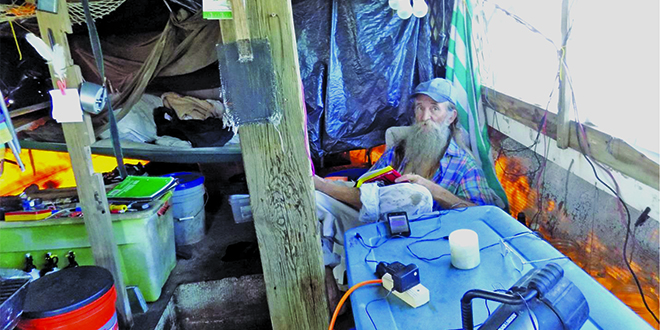 Looking forward in the cabin: Danny reads in his sole piece of furniture, a plastic chair. LED bulbs hang over the chair. Not visible is a small fan. His hammock and bedding are to his upper left. The mosquito netting and black plastic must be used constantly in the rainy season. Danny’s library is to his left. Everything must be kept in tubs because of the sieve-like roof. Sunlight shines through the fiberglass hull, which Danny says is still watertight. Posts shore up the rotting ceiling.

Danny Mootispaw has lived on a boat in waters adjacent to Naples or Goodland since 1993. In 2002 he traded a pickup truck for a 26-foot 1973 Chris Craft. He and his wife Roseanne, whom he had known since age 8, and with whom he had two of his children, lived aboard the Chris Craft, first off Naples and then in Goodland Bay, where they moved the boat in 2002. “We were hoping for some peace and quiet in Goodland,” Danny said, “We had to put up with a lot of stuff anchored off of Naples.”

Danny was to find little peace and quiet in Goodland. The peace which he craved has proven chimerical. Danny had used the savings from his locksmith business to refurbish the Chris Craft. In 2003, he used up most of what was left to pay $600 for the hull of a stripped down, 32-foot Nolands, which lay decaying in a Naples boatyard. “It was originally built as a Navy officer’s launch,” said Danny, “so it was sturdy enough. But it took three months of patching before it was safe to tow it over to Goodland.” Once there it was tethered to the Chris Craft, while Danny tried to make it livable. “We had nowhere else to go,” Danny said, “I couldn’t work because I couldn’t get a drivers license.” With no way to drive to an employment, Danny spent 2004, cleaning the boat and building a superstructure. He named it “Fishing Camp” (FC). It was to be his home for the next 13 years. “The Chris Craft was too hot,” Danny said, “It was like sitting in a parked car on an asphalt lot with the windows closed. I needed more ventilation.” Using the last of the money he had saved, he installed some 2×4 posts, put in stringers, and overlaid them with plywood, which he had fiber-glassed. As for the walls – there are no walls. The cabin is enclosed only by screening and latticework. Before he and Roseanne could move into the FC, they were attacked by two men who circled the Chris Craft hurling obscenities. Unable to fend them off, Danny was knocked down the gangway, into the cabin where his wife was cowering, grabbed a gun, and ordered the men off the boat. “We were constantly getting yelled at and harassed,” said Danny, “After this, Roseanne said she couldn’t take it anymore and moved over to Naples.” Danny regularly visits her there, pedaling over on his bicycle.

In 2006, Danny decided to warp the FC over to the area of the Goodland Bridge, hoping that the more public arena would lessen the harassment. Instead, someone tried to kill him. Around midnight, he was jolted out of a sound sleep by a sharp explosion just outside his boat. Bewildered at first, he rushed out on deck in time to see a boat, with throttle wide open, disappearing into the darkness. On inspection of the cabin, he found a bullet hole less than four inches from his left elbow. “I never heard them coming,” Danny said, “They must have poled up to my boat. They knew exactly where I slept. My boat was constantly broken into when I was absent.” Danny knows this, as he places twigs and other small articles where they are likely to be disturbed by intruders. The harassment continues, largely unabated, to this day. Spotlights have been regularly trained on his boat from the Goodland Bridge, drones have snooped, obscenities continue to be thrown at him, personal property is regularly stolen, and deputies have attempted to legally evict him from his boat (See “This Judge has a Big Heart” in the November 25, 2016 edition of Coastal Breeze News). Danny says even his Chris Craft, with much of his identity, was stolen shortly after he moved to the bridge. Despite all of this, plus having no ID or job, Danny has persevered. How does he do it?

Danny, at 61, leads a Spartan existence, but one that has turned out to be a healthy one. He goes to bed by 8 PM and is up by 4 AM. He gets by on one meal a day. His diet consists of fish, fruit, nuts and vegetables – stuff that he grows himself or finds in the wild. “You can’t starve to death around here,” Danny says, “[The food] is right in front of you, but people don’t see it.” He walks at least four miles every day and rides his bike for periodic errands to Isles of Capri, Marco Island and Naples. He even has some old iron on his boat, with which he works out. Rowing his dinghy adds to his upper body strength. He rows it to Naples when his bike breaks down, visiting his wife or his mother, when she is down from Ohio.

Danny’s favorite fish is the sail catfish and mangrove snapper, which he catches from his boat, using oysters or catfish for bait. The algae on the bottom of his boat are a breeding ground for fish and crustaceans. “When I go swimming, sometimes the water is teeming with fingerlings and other fish around the boat” he says, “It seems like you can almost walk on them, they are so thick.” The fish are cooked on a makeshift grill, which is fueled by twigs. He occasionally has rabbit, frog, or certain unprotected turtle meat. He grows onions, tomatoes, potatoes, kale, spinach, chard, and three kinds of lettuce in nursery tubs, placed in clearings in the surrounding mangrove forests. For fruit, he is partial to mangos, which can bloom twice a year, and citrus, which he gathers after it falls from the tree and rolls out to the street or sidewalk in Marco Island. He recommends green mangos baked in coals. He eats a lot of coconuts, raising and planting both mango and coconut trees around the area. When he has the money, he will buy flour to make fry bread and three or four-dozen eggs, which he will pickle. For electricity, he has a small generator and a gaggle of solar panels, some bought, but most salvaged from the trash. A tangle of wires hooks them up to batteries, which run his lighting and appliances – mostly small fans. For water, Danny collects runoff in the summer, using his own filtration system, and, in winter, must transport jugs from spigots at the home of local friends or at Margood Park, where he also sees to his personal hygiene. A friend has recently been supplying him with bottled water. He keeps a library of medical books and an aloe plant for self-treatment of illnesses and injuries.

His living cabin reminds me of that of a 30-foot sloop. An isle runs down the middle with his hammock slung crosswise in the front. It looks snug, but it is not. The roof, which he constructed back in 2003, is rotting and falling apart. The fiberglass covering has cracked in some places. In the rainy season, water drips down into the cabin, soaking everything not under plastic or in tubs. Danny must cover himself in plastic when he sleeps. The hull of his boat is sound, but the super structure needs replacing. Danny can do all the work himself. He just can’t afford the materials.

The “Fishing Camp” always has a gentle rocking motion and Danny cherishes his life and independence on the water. “Today, if I had a choice,” he says, “I would probably stay on the water.” He is proud of being able to survive so long with little help or money, but longs to become more of a contributing member of the community. He has skills as a metal worker, mechanic, locksmith, and to a lesser extent, carpenter. He will and can do most anything if given the opportunity. He has a photographic memory, an inquisitive mind, and in my opinion, a high IQ. He has the ingenuity to solve most any problem involving materials. But until he gets his identity back, he will be able to do none of these things. A judge with a big heart recently helped Danny to stay in his floating home. It will probably take a lawyer with an even bigger heart to restore his identity and his dignity. Fate has dealt Danny an unusually cruel hand. He has played it courageously and as best he can. He longs to rejoin society.

For a chronicle of Danny Mootispaw’s life and more photos, visit Coastal Breeze News online (coastalbreezenews.com) and read the prior articles on Danny written by Barry Gwinn.