CurePSP Walk Just Around the Corner 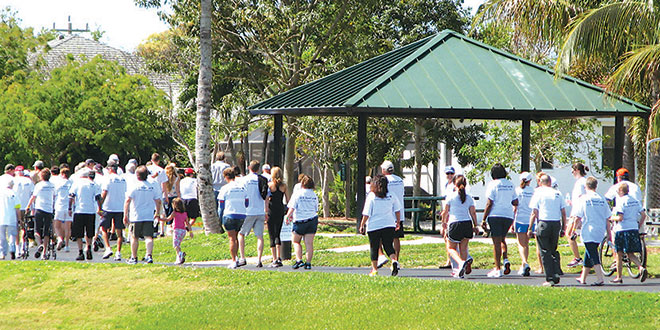 Christina Dean is hoping for another significant turnout for the 12th Annual CurePSP Awareness & Memorial Walk.

The Marco Island resident is a member of the Southwest Florida PSP Support Group, which organizes the fundraiser, set for March 12 at Mackle Park from 10:30AM to 1:30 PM. The event benefits CurePSP, a national nonprofit that helps fund research, educate healthcare professionals, and provide programs and services to support PSP suffers and their families.

PSP is a progressive and incurable brain disease, similar to Alzheimer’s, Parkinson’s and Lou Gehrig diseases, that eventually leaves its victims wheelchair bound or bedridden.

“We had over 300 people and collected over $40,000 at our annual walk last year,” said Dean. “We are hoping this year will be even more successful. We are happy to donate our time for such a good cause.”

Participation has been growing each year as awareness of the little-known neurodegenerative disease, CurePSP and the annual event increase, said Dean.

She got involved with the Southwest Florida PSP Support Group in 2010 while she and her husband, Pat, were caring for her uncle, Elmer Lokkins, a PSP sufferer who passed away in 2014.

“He had a difficult time finding help, doctors, hospitals and even caregivers,” said Dean. “Every time we took him to the hospital, we’d say, ‘He has PSP’ and they’d say, ‘what’s that?’ Doctors and nurses didn’t know what we were talking about.”

According to CurePSP, the disease strikes five to six out of every 100,000 people, but only about one third of them receive the correct diagnosis. PSP is often misdiagnosed as Parkinson’s disease, because of the general slowing of movement. It is also mistaken for Alzheimer’s because of change in mood, intellect and personality. People affected with the malady usually survive six to ten years after the initial symptoms occur.

“There’s really no test to find out what it is,” said Dean, who also said that awareness is slowly growing within the medical profession, but there is still a long way to go.

The CurePSP Awareness & Memorial Walk includes a silent auction, prizes and other activities. The length of the walk is less than one mile around the Mackle Park lake, which is wheelchair accessible.

“Please join us,” said Dean. “We have a lot of fun and great raffle prizes and it’s for a good cause. If you know anybody with PSP or any of the related diseases, please contact us. There is help out there for you.”