Cuba Opens Its Door to Americans 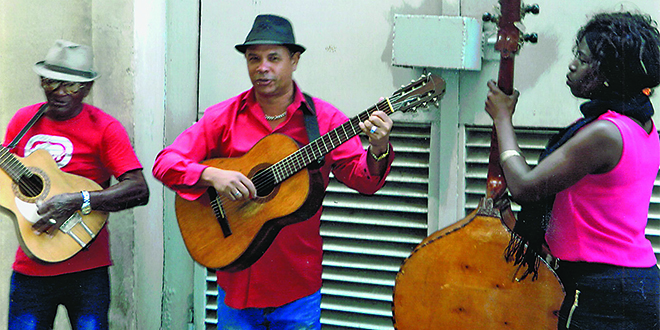 Musicians perform on the street.

The mysteries of Cuba, its isolation and its oppressive heritage has long fascinated and intrigued Americans. Now that Cuba has left its doors slightly open I took the opportunity to see for myself what is happening there.

I booked a people-to-people cruise on Fathom’s Adonia, a 904 passenger ship sponsored by Carnival Cruise Lines, to gain a better understanding of the country and its people. Fathom was the first cruise line to receive approval from Cuba to travel there. A one week cruise does not answer all the questions one may have about Cuba, but it does afford the opportunity to see some of its culture and living conditions.

We had local Cuban guides for all our land excursions, and I began to question if they were being completely candid about the recent history of their country under the Castro regime. I asked one what he thought about Raul Castro, and his immediate reply was “I like him.” That led me to be reflective about what we were being shown and told. Nevertheless, I felt we were able to see enough of the current Cuba and meet many local people.

Our first port of call was Santiago de Cuba, the country’s second largest city and its first capital. We entered the city along a mountainous coastline and passed by some cities with evidence of poverty and decay. A full day tour started at the UNESCO world heritage site at Castillo del Morro, with the same name as its Havana counterpart. It is a large coastal fortress constructed in 1637 to deter pirates who then threatened the city. Morro is one of the best preserved examples of 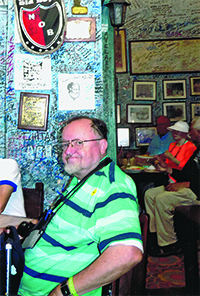 The author, seated at Hemingway’s table at what was his favorite Havana restaurant.

On our return to Santiago we drove by the famous site of San Juan Hill, where Teddy Roosevelt led the Rough Riders to victory in the Spanish-American War. Next we drove by Revolutionary Square in town that honors Cuba’s past history. After an elaborate lunch including lobster, shrimp and beef, we stopped at the picturesque city square which is flanked by its cathedral and the town hall where Fidel Castro spoke to large crowds following his victory in 1959.

Our next scheduled stop at Cienfuegos was aborted because our ship had to return to Santiago for a medical emergency.

The next day we entered the huge Havana harbor, cruising by its massive Castillo del Morro fortress which has been protecting the city since the 16th century. Havana is also a UNESCO world heritage site, with 2.2 million people, and a long history of both famous and infamous fame. Havana was once the third largest city in the Americas and a major port of the Spanish empire when it was known as the “Paris of the Caribbean.” However, its reputation and fame suffered under dictatorships, Mafia influence and nearly 50 years of Castro’s communist rule. It still retains its old narrow cobblestone streets and several ancient plazas. It looks more like a European city then a Caribbean one. It has many high rise and commercial buildings giving it this appearance. There is evidence of restoration, which should continue if the country becomes more open to tourists and possible changes in its government. However, there is still much evidence of poverty and substandard housing.

Havana is famous for its cigars, 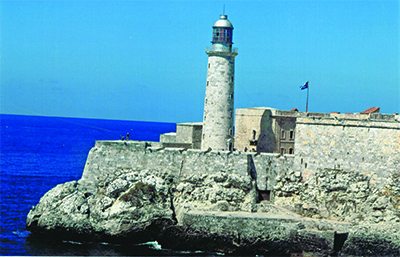 Castillo del Morro, at the entrance of the Havana Harbor.

rum, baseball players and music, but its greatest fame are its bright colorful classic 1950s-era American cars that fill its streets. It takes Americans back to their youth to see cars that they once drove.

The next day I took a tour that followed in the footsteps of Ernest Hemingway, the famous author who lived and worked here for 22 years before Castro took over. First we stopped in a small fishing village were he lived and fished and wrote his last novel, “The Old Man and the Sea.” Next we stopped at a huge bungalow home were he once lived, that is now a museum containing many of his possessions, including his large fishing boat. Our next stop was at a Havana restaurant were he ate and drank. I sat at a table under his picture were he reportedly dined, although it might have been his beverage table. His presence is still evident in the city.

Cuba is a difficult place to evaluate on a short excursion, but I did come away with the impression that the people are outwardly happy and very pleased to meet and talk with Americans. It remains a very poor country by our standards, but it is showing signs of progress with new construction and development. If it should see the end of Castro-communist rule it could emerge as a thriving tourist mecca. Its people, who have lived under brutal communist rule, deserve the opportunity for a better life and future. The door has been cracked open and now we can only hope that it is pushed open all the way so that these kind and pleasant people can enjoy the fresh air of freedom.