Cuba: From the Beach to the Mountains 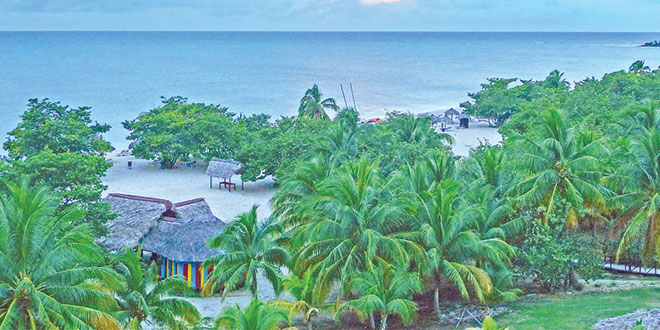 Trinidad, Cuba, featured in my last column, is situated between the Caribbean Sea to the south and the Escambray Mountains to the north. Our visit to Trinidad afforded us the opportunity to see both while staying at an all-inclusive resort.

While it may not be held in as high esteem as the popular northern Cuban beach resorts of Varadero, Guardalavaca and Cayo Coco, we thought Playa Ancón was very attractive. A strip of land extending out into the Caribbean, Playa Ancón was developed after the 1959 revolution. Two and a half miles long, the off-white beach is home to three hotels. There are about two-dozen colorful scuba diving sites off of the beach.

Our hotel, the Brisas Trinidad del Mar, built in the colonial style with attractive landscaping, offered much of what is typical at all-inclusive resorts in the Caribbean. There were 241 rooms, including two designed for people with physical challenges. The beach was shaded by thatched roofed palapas, with lounge chairs, as well as some natural shade from trees. Facilities/activities available included winding pools, a jacuzzi, a children’s pool, scuba diving, snorkeling, boat rentals, fitness center, game room, tennis courts, sauna and moped rentals. There also

were shops, massage, a computer room and 24-hour medical services. Three bars, two a la carte restaurants, and a buffet restaurant provided food and drink, and there was a 24-hour snack bar with drinks, hamburgers, hot dogs, French fries, (surprisingly decent) pizza, and made-to-order coffee. In case that wasn’t enough, there was also a serve-yourself ice cream kiosk. Daytime activities, evening entertainment, and on some days, lunch set up on the beach, rounded out the offerings. A bell tower provided a bird’s eye view of the surrounding area, including the mountains.

Our room had air conditioning, a refrigerator, safe, and satellite TV with English speaking stations such as CNN and BBC. Yes, we had everything we could possibly want except hot water. The resort was experiencing problems with their water and we had no hot water for the three days we were there. A guide we met claimed she had been coming to this resort for five years and had never encountered this problem before. Who knows?

The food was abundant and of good quality. Knowing how poor and wanting for basics so many Cubans are, I felt very uncomfortable with all that gluttony.

We sat at the same table in

the buffet restaurant for breakfast and lunch. Our waiter was very friendly, helpful and patient with my attempts to converse with him in Spanish. We tipped him at each meal, although many other guests did not, tipping not being a custom in their home countries. At one of our meals he presented me with a gift of a small purse crocheted by his wife; Trinidad is known for its handmade needlework.

Leaving from the beach, our daylong excursion into the mountains was the highlight of our trip for me. Historically, the Escambray Mountains have been home to coffee growing for over two hundred years. It was the hiding place for anti-Batista rebels during the revolution, as well as those who were anti-Castro after the revolution. Today, a good part of it is a nature reserve park, Topes de Collantes, with 125 miles of beautifully thick and diverse vegetation, waterfalls, caves, ponds, and a subterranean river.

The park is divided into several named areas popular with tourists. There are some hotels and restaurants, and a museum of contemporary Cuban art. A very unattractive Kurhotel that was built as a sanatorium for TB patients is now

used primarily for “health tourism.” There are

designated camping sites, and for many of the hikes one must be accompanied by a guide. There are opportunities for horseback riding, swimming, and a reservoir with rental boats and fishing. It is a popular location for bird watching, and we met a couple from the UK there to do just that. The highest peak is just under 3,800 feet; the highest waterfall, 197 feet.

We traveled along a steep, winding road to park headquarters, where our adventure really started. When we booked our excursion on a Soviet army truck we thought it might be too touristy. It wasn’t. In fact, I don’t think we could have easily gotten to where we went without those trucks. It was an incredibly bumpy trip on a steep, deeply rutted road. For that time of year, there had been unusual heavy rains for a few days prior to this trip, and we were amazed that the truck was able to negotiate some of the very muddy gouged out sections. At least twice, we thought for sure we would get stuck.

The scenery on the way up through the jungle was beautiful; hardwoods, pines, Jurassic-like tree ferns. Everywhere were the yellows, reds, oranges, and

intoxicating fragrance of flowers. We passed people with horses, horses roaming free, and a man walking a pig on a rope. At various points, there were picturesque viewpoints over the Valley of the Sugar Mills, Trinidad, and Playa Ancon.

Our first stop, not far from park headquarters, was the Jardín de Variedades del Café, where we learned about the different varieties of coffee and how it has been grown there over the years. Our local guide, a former university professor, ecologist, herbalist, and great entertainer, told us all about the natural treatments for medical conditions such as inflammation, high blood sugar, high blood pressure, and high cholesterol. Most of the recipes included coffee and rum along with various fruits, leaves, or bark. He has written a book, which will be carried on Amazon sometime this year. As he discussed coffee culture, two parrots flew overhead squawking down at us. Then, of course, we had to stop at the adjacent coffee house for sampling.

Our next destination was a coffee plantation popular with tourists for its nature hikes, medicinal mud baths, and restaurant. We hiked through the jungle on a very civilized trail and over wooden bridges past a cave, pond, 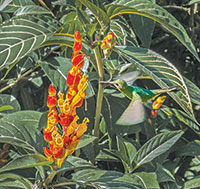 and orchid and bamboo gardens. I can’t even begin to name all of the types of flora seen, but here are a few: jasmine, ginger, begonia, mariposa, all manner of epiphytes, vines, lichens, ferns, mosses, plantain, banana, eucalyptus, hardwoods, pines, even an orange tree. There was one tree whose leaves smelled like root beer and another that smelled like amaretto. Although we heard others, the only birds we saw close up were hummingbirds and loggerhead kingbirds.

We lunched on pork, freshly roasted in the open air, a variety of fruits and vegetables, the inevitable rice and beans, and the local specialty drink, jincila, made from ginger root, honey, mineral water, lemon, and, of course, rum. Final stops at an organic farm, fruit and coffee stand, and more scenic overlooks completed this very special day in the mountains.