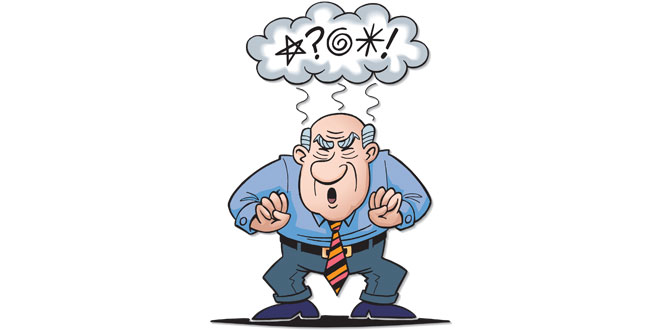 As I age my fear is that I am becoming far more crotchety; so much so that my proposed new organization for such as me would be known as “Cranky Old Men” or just COM (Not to be confused with the movie “Grumpy Old Men”). I also considered having a group of “Cranky Old Women”, but the acronym “COW” would label me as a misogynist, so please bear with that omission.

My latest piece of crankiness revolves about the indiscriminate use of those ubiquitous so-called smart phones. The phones may be smart but some of the folks who use them are displaying discourtesy, at best, and downright stupidity at times. It’s bad enough when he/she in the next restaurant booth is hollering loudly into a cell phone; it’s also extremely dangerous when he/she is meandering down a highway holding a cell phone in one hand and a comb in the other.

The other day my Very Patient Wife and I went to a movie. Cell Nuts who actually were on their phones surrounded us, texting during the movie. Of course their instruments were lit up like flash bulbs and it was hard to concentrate on the flick. “Please”, I begged, “Turn off your phones”. Some complied. Others didn’t, leading me to wonder why they chose to go to the theater in the first place. Maybe it’s the comfortable seats, or the animal joy they get out of bugging their neighbors. “Bah, Humbug” I say.

Having vented on that subject, let’s turn yet again to the abuse of the almost forgotten English language. My fretting about the overuse of “You know” (if someone knows, why tell him/her so?) and the incessant drumming of “like”. Every sentence these days is punctuated at least three times by “like”. Everything is “like”…I’m, “like” going crazy over people “like” saying “like” over and over. Strike it from your vocabulary, folks. PLEASE.

Now consider the tiny word “at”. It now seems to be a vital piece of any expression of location. “Where you at?” NO! How about “Where are you?” Instead of “I don’t know where I’m at”, how about a simple “I don’t know where I am.” I humbly suggest that “I’m” means “I am”. I probably should simply surrender. Recently I heard a [purported] English teacher use “like” and “am at” in the same incorrect sentence. Maybe it’s better to concentrate on learning Mandarin than worrying about English usage.

It’s not easy being crotchety. I admit to wasting a lot of time fretting about silly stuff. But, that’s, like, where I’m at.