On June 17th, Father’s Day weekend, Marco Island police officer Josh Ferris will embark on a 50-mile, open-water, paddleboard adventure from Bimini in the Bahamas to Dania Beach, Florida. Ferris, an active paddle boarder, is making the journey in order to raise money on behalf of the Piper’s Angels Foundation.

Piper, of whom the foundation is named after, is your average 9-year-old girl. She goes to school, she hangs out with her friends, and she even competes on a competitive cheerleading team. She’s very close to her father, Travis Suit and the two spend a lot of time together in the waters of West Palm Beach, their home. But just beneath the surface of her bubbly, blond hair, blue-eyed exterior lies a hard truth. Piper has a genetic disorder known as cystic fibrosis (CF).

Cystic fibrosis is a progressive disease that causes a buildup of mucus in the lungs and pancreas. This can lead to infection, damage to the lungs (which eventually limits the ability to breath), and gastrointestinal issues. According to the Cystic Fibrosis Foundation, the median predicted survival rate is around 40-years-old. As of yet there is no cure for cystic fibrosis, though science has come a long way in terms of treatment.

Piper was diagnosed with the disease in 2011, when she was 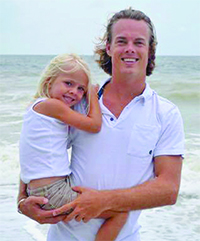 Nine-year-old Piper was diagnosed with CF when she was just four.

just 4 years old. Since her diagnosis she has been participating in rigorous and time-consuming treatments in order to slow down the buildup of mucus in her lungs.

“There’s a lot that goes into your mind when your child is diagnosed with a disease and you don’t know anything about it,” said her father Travis Suit. “One of the first questions I asked when we had our first doctors visit with her cystic fibrosis team was what type of activities can she participate in that are best for this disease and helping her.”

Travis soon learned that salt water has been proven to be beneficial for people with CF. Breathing in the salt air can help hydrate the lining of the lungs and break down the sticky mucus buildup that can lead to life threatening infections. This was great news to him. He and Piper live in a coastal area. Salt water is all around them. The ocean, it seemed, could be a treatment in and of itself. One that didn’t involve hours of sitting connected to tubes and other breathing devices.

“It was a relief to hear that,” said Travis Suit.  “I did my own research and it’s true.”

In 2013, inspired by the therapeutic benefits of the ocean, Travis decided to create a fundraiser called Crossing for 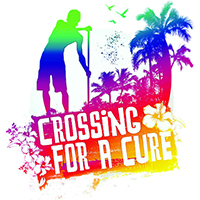 a Cure, in which he and three friends (Shane Pompa, Kyle Igneri, and Josesph Morel, later dubbed “Piper’s Angels”) would paddleboard 90 miles across the open ocean from the Bahamas to Florida to raise funds and awareness for CF. He wanted get the word out about the disease in a way that would de-stigmatize it and empower Piper.

He says that it was a way to prove to her that “just because you’ve been dealt these cards and you have this path doesn’t mean you can’t make the most of it.”

Marco Island police officer Josh Ferris first met Travis Suit in 2007 at a Jimmy Buffett concert in Fort Lauderdale. They happened to be parked next to one another during the tailgate. Travis, who has a background in events and marketing, was there promoting a charitable project benefiting autism awareness. His grill stopped working and Josh stepped in to help. The two bonded quickly. They would meet up at various Buffett concerts throughout the state and tailgate together, eventually becoming good friends.

Now in 2017 Travis will once again be making the trip from the Bahamas to Florida and this time Josh will be joining him. Josh is hoping to recruit a few Marco Islanders to join them.

“Right now I got a couple of Marco guys who are interested so I’m excited about that,” said 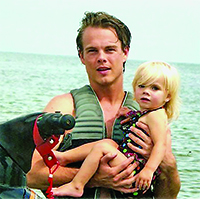 Josh is an experienced paddle boarder so he’s not too worried about the journey. In the coming months Josh will be training in order to be fully prepared for the 12 to 14 hour ride.

“We should have the wind behind us, which is good, and we should have calm water. But you never know. You are paddling in open water in an open ocean,” said Josh Ferris.

The goal this year the goal is to raise $50,000. The proceeds will go towards the Piper’s Angels Foundation to help support local families dealing with CF as well as the national Cystic Fibrosis Foundation.

Piper says that she is grateful for her dad’s efforts “obviously,” and only a little worried that a shark might eat him. She, along with family and friends, will be part of the welcome home party when her “angels” arrive on the beach during Father’s Day weekend.

“I never want Piper to be insecure about who she is with this disease,” said Travis Suit. “I don’t want the disease to define her. I want her to be able to be 100% of who she is and confident with that.”

If you would like to get involved in the 2017 Crossing for a Cure event, visit www.crossingforacure.com. Help Marco Island police officer Josh Ferris reach his goal of $5,000 here: www.crowdrise.com/Joshua-CROSSINGFORACURE. For more information on Piper’s Angels Foundation visit www.pipersangels.org.